La Monarca is trying to challenge the often informal rule in business that immigrant entrepreneurs do best by sticking to their own communities. Its bakery-cafés are both in traditional immigrant neighborhoods and more affluent white communities like Santa Monica and South Pasadena.

In Los Angeles' immigrant neighborhoods, it's not uncommon for the grand opening of a store or restaurant to be accompanied by a live mariachi group. That happened recently at the opening of La Monarca bakery and café in LA's Highland Park neighborhood.

It was the seventh store to open in a growing Los Angeles-area chain specializing in traditional Mexican baked goods and sweets like pan dulce and tres leches cake.

La Monarca was founded by two immigrants from Mexico, Ricardo Cervantes and Alfredo Livas. They say the search for the authentic tastes of home turned into a business opportunity.

"When we moved to Los Angeles, we always looked for the best Mexican food," says Cervantes. "We were trying to find good food, and pan dulce is one of those things that you grow up with. So when we tried the pan dulce that we could find, we always missed the flavor of back home. And we said why don’t we do something? If we miss it so much other people do to."

An entrepreneurial idea was born. But Cervantes and Livas aren't your typical idea of Mexican immigrants trying to make it in the United States. Both come from middle class families in Monterrey, Mexico, and both have earned MBAs from Stanford.

And they have a big goal of breaking an unwritten rule in business — that small business immigrant entrepreneurs do better by sticking to their own communities and not trying to cross ethnic and cultural borders in this country.

"We wanted to do a concept that is, of course, Mexican in essence," says Cervantes. "All of our products are Mexican, but we didn’t want to be categorized into just Hispanic neighborhoods. We thought if we do a good quality concept, a good quality product, people will like it regardless." 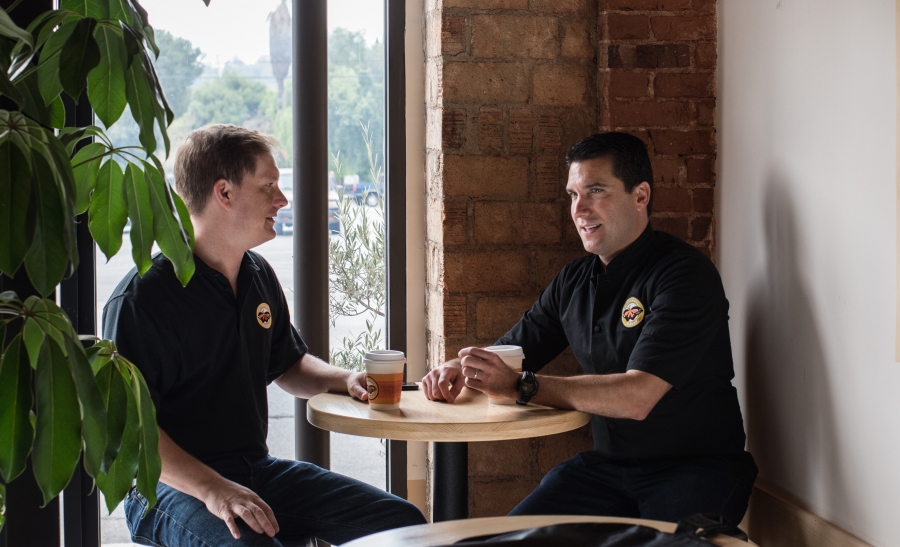 La Monarca’s founders Ricardo Cervantes (right) and Alfredo Livas seated at one of their stores. There are now seven La Monarca bakery and cafés in the Los Angeles area.

Since the opening of the first La Monarca bakery in 2006 with its artisanal pan dulce and coffees, Cervantes and Livas have developed a bicultural business strategy, placing their bakeries in both working class immigrant neighborhoods and in more affluent Anglo communities in the LA area, like Santa Monica and South Pasadena.

To appeal to both Latinos and non-Latinos, Cervantes says La Monarca maintains a careful cultural balancing act, right down to design. The colors and décor in each bright and airy store are picked to suggest Mexico, says Cervantes, but not look too Mexican.

"Yes, you have some touches of Mexican elements," say Cervantes. "But its not meant to detract from somebody who is not Mexican from coming in. Some people go overboard and it’s too Mexican. And it's everything in your face. And so other people don’t feel comfortable."

La Monarca's bicultural approach will be tested in its new Highland Park location.  Once predominately Latino, the neighborhood is now being gentrified with the arrival of younger white residents. They're people who might never think about stepping into a traditional Mexican panaderia, or bakery, but might like La Monarca's exposed brick walls, contemporary furniture, WiFi and Latin alternative tunes always playing on the music system.

Andrew Barrera, president of the Highland Park Chamber of Commerce, says the opening of La Monarca is good for the changing neighborhood and could be a small bridge of understanding between old and new populations.

"Clearly this is right in the middle of an area that is traditionally Latino which is growing in its diversity," says Barrera. "I think they made a very brilliant move in coming here because they are getting the benefits of two different types of business populations, the existing customer base, as well as a new evolving customer base."

The bicultural bakery has also caught the attention of business and political leaders from two countries. Along with the president of California's state senate, Carlos Sada, Mexico's consul general in Los Angeles, attended the opening of La Monarca's newest bakery. Sada calls Cervantes one of the most important Mexican businessmen in Los Angeles and says Mexico should do more to promote the story of Mexican entrepreneurs in the United States.

"We need to do more because there are so many 'Ricardos,'" says Sada. "So many people like this guy, that are talents, but it is not not well known. And I think that it is part of the fault of the Mexican government not to promote the way it should be promoted."

As for La Monarca's future, the owners want to expand the business, opening more bakeries in the Los Angeles area and beyond. But their big dream is to one day cross the border and open their bakeries in Mexico.