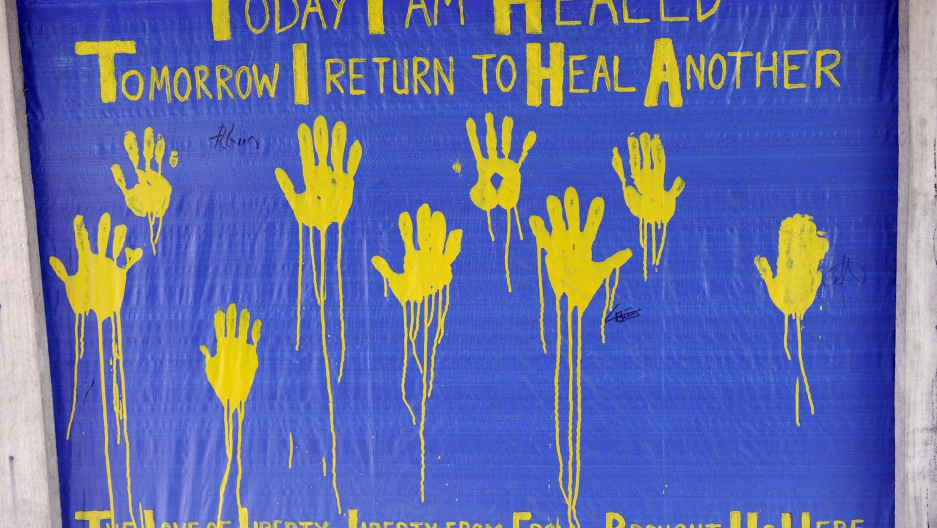 A tarp at a US treatment unit for Liberian healthcare workers infected with Ebola, during the site's decommissioning on April 30, 2015 in Monrovia. Liberia was first declared free of Ebola in May, then again in September after a new round of infections in the summer.
Credit: ZOOM DOSSO
Share

A teenager has died in Liberia in the first such death since the country was officially declared free of the virus in September, an official said Tuesday.

He added that the teenager's parents had also tested positive for the virus and were under observation in the capital Monrovia.

It was confirmed last week that the boy and two of his relatives had contracted Ebola, which has left more than 11,300 people dead since December 2013 in its worst ever outbreak, mainly in the west African nations of Guinea, Liberia and Sierra Leone.

Liberia was first declared Ebola free in May, only to see the fever resurface six weeks later. The country was declared to have officially beaten the epidemic for a second time in September.

The World Health Organization previously reported that the boy was 10 years old, but Karteh said he was in fact 15.

He fell sick on Nov. 14 and was hospitalized three days later in Monrovia, the WHO said, adding that 150 people who had been in contact with the family were being monitored.

Since the beginning of the outbreak, Liberia has registered more than 10,600 cases and more than 4,800 deaths, according to a WHO situation report published last week.

Great news from Guinea as 21-day-old Nubia tests negative for Ebola. She became infected in her mother's womb. Mamasta, her mother, sadly died from the virus 12 days ago. “Nubia has responded well to the treatment she received at the MSF Ebola management centre in Conakry. We are pleased that she has been tested negative, but as she is the first infected baby to have recovered, she will continue to receive specialised medical support before going home. Guinea has begun a 42-day countdown after which the epidemic will be declared officially over, provided that no new cases are reported until then. The government and the communities have worked hard with us to arrive at this result. We must still remain vigilant for any potential new cases so that our achievements will not be destroyed," says Laurence Sailly, MSF emergency coordinator in Guinea. © @samuel_aranda13 #Ebola #Guinea #MSF

That announcement triggered a 42-day countdown — twice the incubation period of the virus — before Guinea can be declared Ebola-free.

Sierra Leone was declared to have beaten the virus earlier this month.