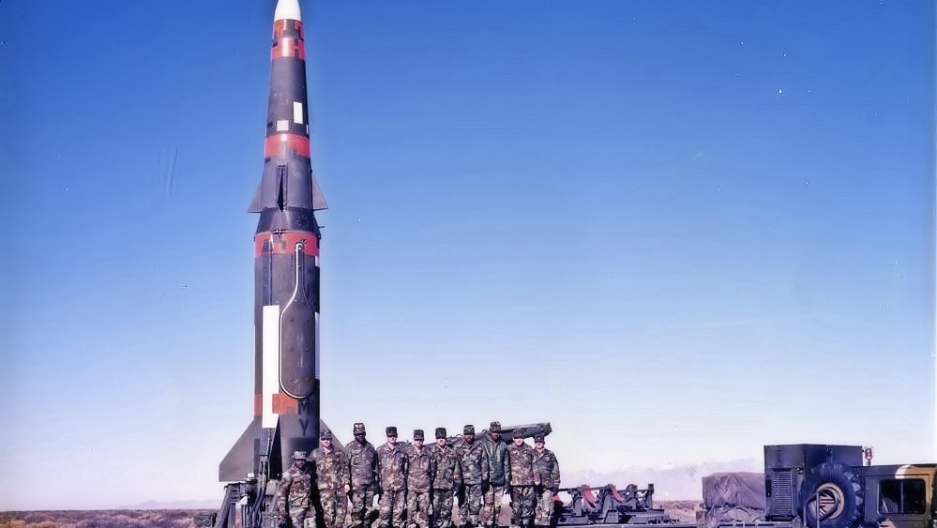 A Pershing missile being made ready for testing at White Sands Missile Range, January 1986

When you think of war scares back in the Cold War, most people think about the Cuban missile crisis in 1962. But a newly declassified document reveals just how close we came to nuclear Armageddon in the 1980s, under President Ronald Reagan.

The document is a top secret 1990 report by the President's Foreign Intelligence Advisory Board. The report was obtained by the National Security Archive at George Washington University, after a 12-year fight, and released on Oct 24.

"In 1983, we may have inadvertently placed our relations with the Soviet Union on a hair trigger," the report concluded. “Soviet leaders had changed their strategic thinking and, in fact, believed that the US was attempting to gain decisive strategic superiority in order, possibly, to launch a nuclear first strike.”

In September 1983. a Soviet system malfunction indicated US missiles were headed to the Soviet Union, and only a doubting overnight officer stopped the Soviets from launching retaliatory nuclear missiles.

Two months later, a war scare developed in the Soviet Union and lasted several months. Strategic nuclear forces were put on alert, and overall military readiness was enhanced. Civil defense exercises prepared the people of the Soviet Union and its Warsaw Pact allies for a nuclear war.

At the time, US strategic intelligence estimates assumed the Soviet actions were all bluster and propaganda. But this new document indicates that the Kremlin really thought the US was planning a first strike on the Soviet Union. What’s more, they believed the US would in fact do so as soon as the US reached a certain level of strategic military superiority.

The Soviets setup an automated, computerized mechanism to determine 'objectively' if that was happening, and to measure NATO’s military readiness.

But perhaps what's really scary was how the Soviet leaders planned to respond, which would have been to launch their own pre-emptive strike, if they saw what they considered 'indicators' of NATO military preparations.

Remember the context of the times. President Reagan had declared the Soviet Union to be an “evil empire.” He began a massive buildup of all sectors of the US military, including its strategic nuclear weapons, and was about to start deploying short- and medium-range nuclear missiles to Europe. In March of 1983, Reagan announced the ‘star wars’ program, the Strategic Defense Initiative, designed to shoot down incoming warheads. In September, the Soviets shot down a Korean airliner that strayed into its airspace.

But the newly declassified report indicates the real clincher was a large military exercise called ‘Able Archer.’ This exercise took place every year, but in '83 things were different. The exercise included a practice drill that took NATO forces through a full-scale simulated release of nuclear weapons, including equipping warplanes with realistic dummy weapons that fooled Soviet spies. The original scenario was also supposed to involve high-level officials, including the secretary of defense and the chairman of the Joint Chiefs of Staff in major roles. Even the President.

Of course, the US would never have started World War III. But it appears the Soviet leadership thought otherwise, according to the PFIAB report, which stated “it is an especially grave error to assume that since we know the US is not going to start World War III, the next leaders of the Kremlin will also believe that — and act on that belief."

A different CIA paper reviewing the period makes the point that this generation of Soviet leaders were all traumatized by Operation Barbarossa in 1941, when the Soviet Union was betrayed and attacked by its ostensible friend and ally, Hitler's Germany.

So how close did it come? The document says we were lucky: “As it happened, the military officers in charge of the Able Archer exercise minimized this risk by doing nothing in the face of evidence that parts of the Soviet armed forces were moving to an unusual level of alert. But these officers acted out of instinct, not informed guidance.”

In due course, Ronald Reagan says in his memoir that he concluded that Soviets really did see the US as potential aggressors, and took steps to ease tensions, just as Mikhail Gorbachev in Moscow also started dialing back tensions.

The document concludes that US intelligence severely miscalculated in assessing Soviet reactions to the crisis. The document recommended various ways to improve intelligence risk assessment and analysis.

In terms of lessons for today, never assume you know what your enemy is thinking.

One word of caution, though, the PFIAB document was written in 1990 without access to original Soviet documents, and without interviewing current and former Soviet officials. Its main sources were a defector, who provided some documents such as KGB directives, and other human intelligence and signals intercepts, which are largely redacted in the published version.  So a historian would need more sources, for a full picture. Especially as the original writers of the US strategic intelligence estimates in 1984 are reported to still stand by their findings, that the Soviets were only blustering.

But then there's Gorbachev himself, who in February 1986 said: "Never, perhaps, in the postwar decades has the situation in the world been as explosive and, hence, more difficult and unfavorable as in the first half of the 1980s."