In the days after the Paris attacks, classes at the Great Mosque in Paris were canceled, though the mosque remained open.

The Great Mosque in Paris is guarded by soldiers in fatigues, armed with machine guns, though there’s only a sporadic bag check at the front door. Inside, the building looks like a traditional Moroccan mosque, with colorful tiles and a tranquil patio populated with cypress trees. You’d never know that people here are on edge.

Asma Aboubakari Soihili, a 20-year-old biology student at a nearby university, came to the mosque for midday prayers. She wears a headscarf and matching robe and she says she’s concerned about being singled out as a Muslim in the days since the Paris attacks. She says she finds the military presence comforting, but she’s worried about her community.

“Our religion is opposed to violence,” she says, “and I would like all French people to understand that.” 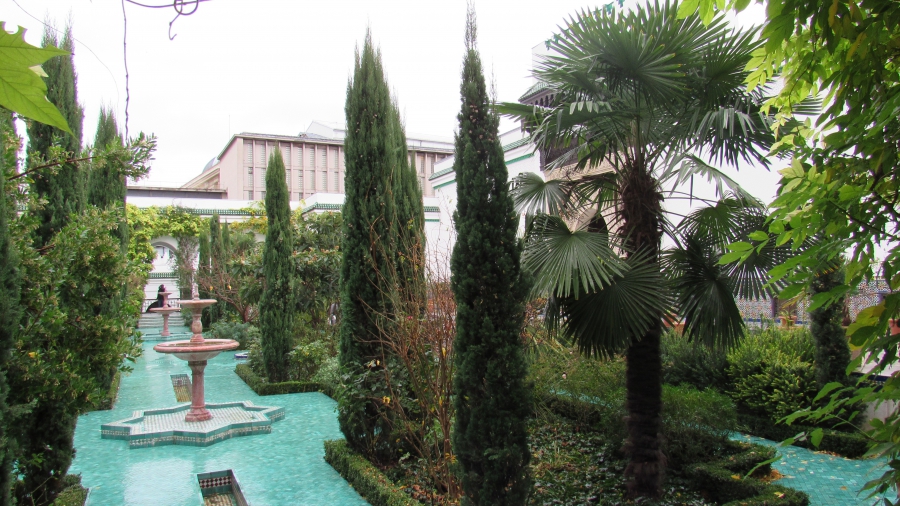 The courtyard of the Great Mosque of Paris was so calm and tranquil, you might never know that people visiting were on edge.

Another student here, 21-year-old Sakina, who doesn’t want to give her last name, is also worried.

“Besides the state of shock and this overwhelming sadness we feel at this time, we also experience another layer of sadness,” she says. “Every day, I try to be a good representative of my faith,” Sakina says, “and to show that it’s in harmony with French culture. And then all of a sudden, your work is ripped to shreds by an inhuman and irrational act,” she says. She tells me that she’s looking to Muslim leaders here to work with other religious authorities to help make sure Muslims aren’t cast as terrorists again.

Armed military guards stand outside the Great Mosque on contrast to the tranquility inside.

But the head of this mosque, Dalil Boubakeur, who wears a dark suit, says he’s fed up with having to prove again and again that the word Muslim isn’t a synonym for terrorist.

He thinks the media are to blame.

“The problem with the media” he says, “is that they want sensational items… you know… the man with a beard who’s going to say ‘Allahou Akbar’ and so on. Enough with that! The media need to take responsibility and show the moderate side of Islam, but they have no conscience. They’re the ones who have made Islam in France what it is today,” he adds.

When I ask what he was going to do about it, Boubakeur says, “I am exhausted Madam, heroes are exhausted, and we are tired of people not doing what they are supposed to do and hope for a miracle. Everyone has a shared responsibility in the future of France. If nobody gives a damn, well then, that’s that.” 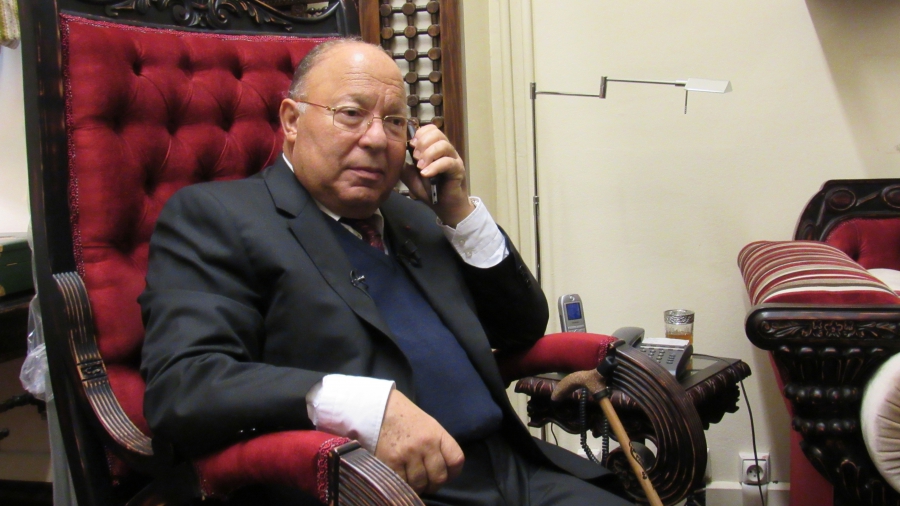 Dalil Boubakeur, the head of the mosque, says he's exhausted from having to prove again and again that Islam is not a religion of violence. He says the media is partly to blame.

Outside the mosque, another student, Moussa Chalabi, accompanies a group of Palestinian kids on a visit here.  Chalabi lost someone he knew in the attacks, a young Muslim woman. But despite his grief, he seems hopeful about things. He tells me he feels there is a big difference between what the Paris attacks and the attack on the Charlie Hebdo satirical magazine back in January.

“I felt real unity in the aftermath” he said, “in the sense that everyone was hit. It wasn’t like Muslims attacking the freedom of expression in France, it was terrorists attacking French people of all faiths.

He tells me that since the Friday night attacks, there has been some retaliation against Muslims — there’s been the “obligatory slice of bacon” stuck to the front doors of mosques. “Some idiots apparently think pork is to Muslims what Kryptonite is to Superman,” he says. “But on the whole, I feel that all French people are united against this.”