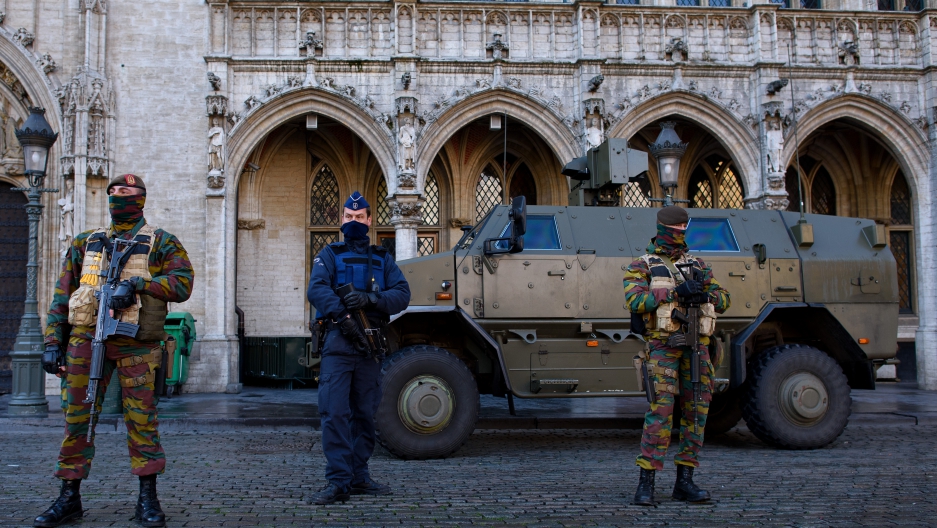 An armed policeman and two soldiers stand guard over Stadhuis Van Brussel on Nov. 23, 2015 in Brussels, Belgium. Security has been tightened in the nation's capital after police arrested sixteen suspected terrorists during more than 22 anti-terror raids around the city on Sunday.
Credit: Ben Pruchnie
Share

Officials have put the city of Brussels on lockdown for a third day as authorities hunt one of the suspects in the Paris attacks. They have carried out numerous raids and about 20 arrests in the hunt for Salah Abdeslam. A thousand police officers are still searching for him. Universities, schools and the city’s metro system remain closed on Monday, and the army is in the streets. One schoolteacher described the scene in the city as "like we are in a war."

Meanwhile, European leaders are working toward stronger action to take on the Islamic State, which claimed responsibility for the Paris killings. British Prime Minister David Cameron wants his lawmakers to back broadening Britain's role in the assaults against the terror group, including expanding airstrikes in Syria.

In the United States, the Paris attacks have ignited calls to ban Syrian refugees from settling there. That’s despite the fact that none of the alleged attackers identified so far were refugees, and that the US has a stringent refugee vetting process.

In Europe, however, thousands from Syria and other war-torn countries continue to arrive at its doors. Some refugees are already concerned about a backlash in their new homes.

GlobalPost’s Senior Correspondent Richard Hall spent time on the migrant trail at the height of the refugee crisis, and reported on the impact that Europe’s uncoordinated approach to border control was having on those fleeing war. Things could easily get worse.

Argentina just had a major election. Free-market lovers worldwide will be celebrating the result. Fans of lefty populist ways, not so much.

A conservative named Mauricio Macri won the presidency. If you don’t know him, he’s 56, used to be Buenos Aires’ mayor, and is a friend to big businesses and foreign investors. The man was making deals with the likes of Donald Trump when he was only 24 years old.

The region’s other right-wingers — like the ones in Venezuela’s jail cells — were encouraged by what this could represent for prospects in their upcoming elections.

A Macri administration will mean a major right turn away from incumbent President Cristina Fernandez de Kirchner and her late husband, ex-President Nestor Kirchner. The couple’s populist Peronistas have governed Latin America’s third-biggest economy for the last 12 years. Economists blame them for a long list of the country's ills, including an approaching recession, and for allegedly fudging statistics on poverty and inflation.

But there is one area they agree on. Just like his rivals, Macri will have no problem with energy companies fracking the heck out of Argentina’s immense fuel deposits. There’s plenty to play with. The country has the second-largest shale gas and fourth-largest shale oil reserves on the planet.

Earth-huggers are demanding to keep those resources where they are. But energy giant Shell has other plans.

Colorfully painted murals like these in parts of Buenos Aires are crying about what oil drilling does to the environment.

The issue did not appear on Sunday’s ballot.

Cats drinking Stella. Cats at the spa. Cats stuck in takeout boxes and lazing in bed; fuzzy kittens with pistols. These were just a few of the choice images to come out of some terrible circumstances in Belgium over the weekend, where the authorities had Brussels on lockdown. As the raids wore on on Sunday, police implored Belgians not to post anything on the web that might compromise their operations. The people complied. But a news blackout on social media means a void, and the void must be filled. Enter the cats of #BrusselsLockdown. The hashtag and ensuing flood of cat-centered memes and images promised anyone searching Twitter for sensitive details got served some feline absurdity instead.

So, did cats save the day in Brussels? No, not really. But the kitties did seem to help, if only for a moment of distraction. Today the federal police thanked them for offering cover, tweeting out a picture of a bowl of kibble with the message: “For the cats that helped us last night…help yourselves!”

The internet's a weird and wonderful place.