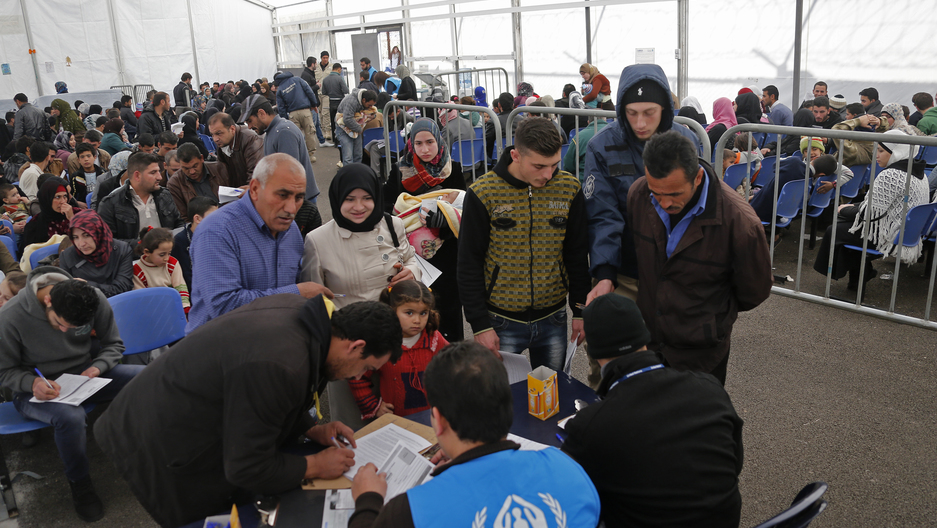 A family submitting an application at the UNHCR registration center in Tripoli, Lebanon.

This week, 47 House Democrats joined Republicans to pass a GOP-sponsored bill that would suspend an Obama Administration program to admit 10,000 Syrian refugees. The legislation mandates that high-level intelligence officials verify that each Syrian refugee poses no security risk.

In Massachusetts, Syrian refugees and their advocates are concerned about the tone and politics of this debate on both national and state levels.

For example, Donald Trump has a recurring theme these days on the campaign trail.

"I’m putting the people on notice that are coming here from Syria as part of this mass migration. If I win, they’re going back. They’re going back," Trump said at a recent rally in Keene, N.H.

“It's very bad for me, bad feeling,” one man says who has been listening to the rhetoric of Trump and other politicians.

This unidentified refugee, his wife and son arrived at Boston’s Logan Airport via Beirut, Lebanon four weeks ago — before an act of terrorism in Paris raised questions about Syrian immigration. Now this man — a doctor in Syria — so hopeful when he arrived, is fearful.

“I tell you before we are suffering from ISIS and terrorists there in Syria. And we run away from that terrorism there. And so the people looking at us as terrorists, I don’t know why.”

And he repeats again, “the people looking at us as terrorist — I don’t know why.”

Calls by the US House of Representatives and at least 29 of the nation’s governors to enact a stricter vetting process for Syrian refugees is winning wide-approval from the American public, according to a new Bloomberg poll. Fifty-three percent of Americans oppose resettling Syrians in the country. All but one governor making the call, Maggie Hassan, of New Hampshire, is a Republican.

Father Milad Selim is dean of St. George Orthodox Cathedral in Worcester, Massachusetts. Forty-five of about 100 Syrian refugees in Massachusetts have settled in Worcester since the war in Syria broke out. Father Milad says the US immigration vetting process is already among the strictest in the world. He should know. He and his family are from Iraq. He asks that America have just a little bit of sympathy for people made utterly destitute by war. 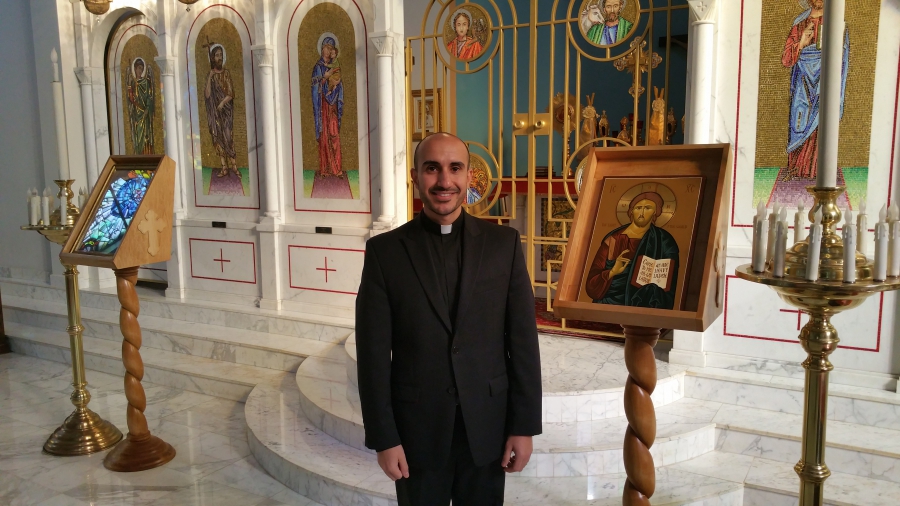 Father Milad Selim is Dean of St. George Orthodox Cathedral in Worcester, Mass. He is helping Syrian and Iraqi refugees in the area to get on their feet.

“My family came originally from Mosul, until recently a Christian community. Now you don’t have any Christians there. And when those people received a knock on their door telling them ‘you leave now. You convert or you get killed’ they were forced to leave with not even a paperwork that identifies them — not even an ID, nothing.”

Father Milad is counseling the new Syrian refugee I met, who asked not to be identified. Non-governmental organizations in Massachusetts are shielding most refugees from the press — fearing for their lives.

The climate now is a stark reversal from the mood of the country, and especially Massachusetts, just weeks ago. That's when the photo of a dead child, Alan Kurdi — washed up on the shores of Greece — provoked a surge of sympathy around the world for Syrian refugees. Germany threw open its doors. The Obama Administration raised its worldwide refugee quota from 70,000 to 100,000, reserving 10,000 slots for Syrians.

“What happened in Paris a few days ago, it reversed everything.“ 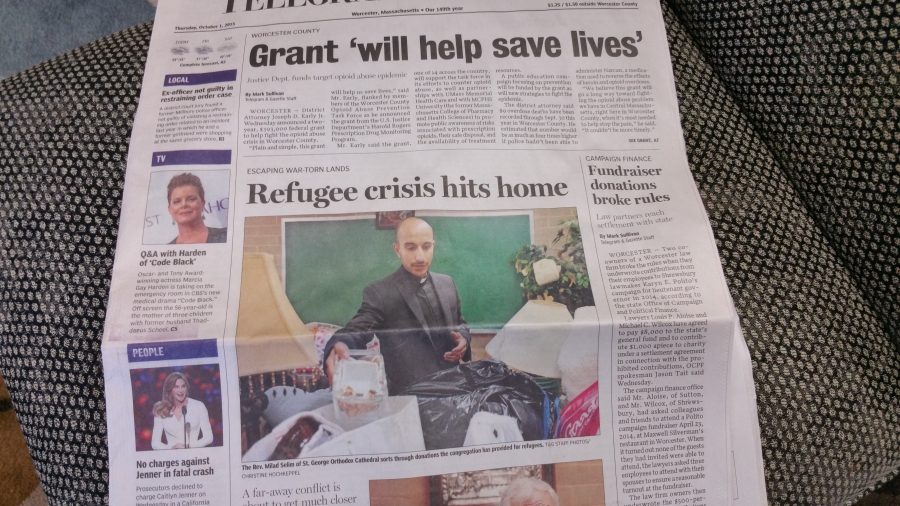 A Worcester Telegram and Gazette article about Syrians resettling in the city, published months before the Paris attacks.

Salah Asfoura is a Syrian American, the brother of the refugee. He's been in the country for the past 23 years, so he's sponsoring his brother and family in Worcester. Asfoura, a successful architect, seems genuinely shocked by the reversal of images from one of Syrian suffering to one of suspicion of Syrians.

“They’re using to achieve certain political goals they have. I mean I’m not in politics. I don’t know much about it, but what I see is completely ugly for me. It’s unhumane. The way they took the whole concept, you know what happened, and really reversed it and attacked the Syrian people over there, that’s how I see it. I mean the Syrian people have had enough suffering in five years.”

“I think it's first a knee-jerk reaction, but I think it's something deeper-seated in there.”

Ferguson is the rector of another St. George Orthodox church, in Boston's West Roxbury neighborhood. Hundreds of Arab American Christians worship here. Father Timothy says it's reasonable that Americans have questions about the refugee vetting process. But, he says, the rhetoric of some GOP presidential candidates, including Senator Ted Cruz and Jeb Bush, who are demanding only Christian Syrians be let in, is beyond the pale. “It might be some innate prejudice toward Arab-speaking people, toward Muslims, towards those people who are unrealistically associated with terrorism.”

Rev. Timothy, who visited Syria at the start of the civil war, says his congregation at one point had prepared for hundreds of Syrian refugees who were expected to come to Massachusetts. Now he fears, they never will, unless the US government speeds up resettlement. Meanwhile, Father Timothy is appealing to Massachusetts Governor Charlie Baker and Boston Mayor Marty Walsh to meet face to face with Syrian refugees.

“Every Syrian who’s here in the Greater Boston area, who wants to come to talk to the governor, who wants to talk to the mayor, please come to St. George Church hall on whatever day you choose. Our hall’s open to every single one of you, regardless to whatever part of Syria you come from, what your politics are, what your religion is. Come and tell the governor who you are. Tell the mayor who you are; how long you been here; where you went to school; where you work.”

Father Timothy says community leaders want the politicians to relax their current positions calling for a temporary ban on refugee resettlement. He says Syrians escaping war have already run out of time. That community meeting has been scheduled for Wednesday.