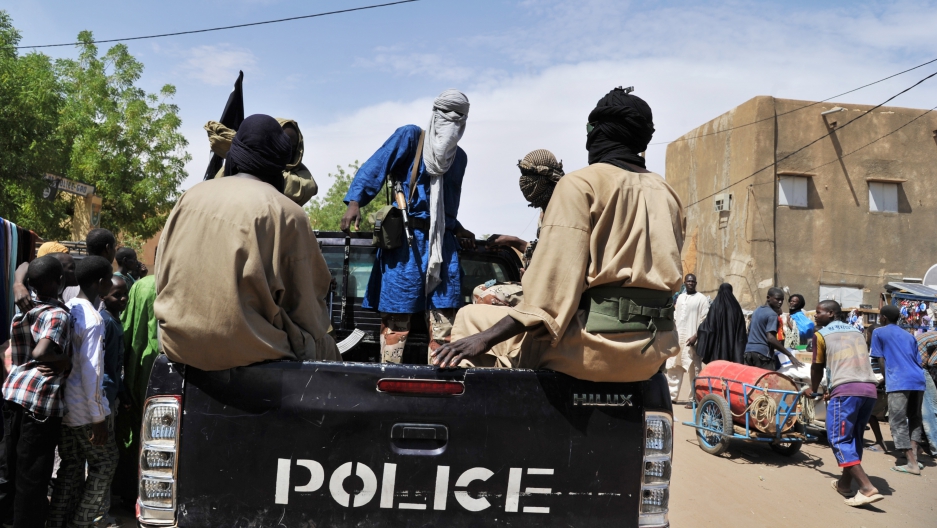 The Islamist police patrol in the streets of Gao, northern Mali, on July 16, 2012. Once one of West Africa's most stable democracies, Mali was plunged into turmoil on March 22, 2012 when a band of soldiers seized power in the capital Bamako, saying they were fed up with how the president was handling a Tuareg rebellion in the north. The ensuing chaos created a power vacuum and enabled the Tuareg ethnic rebels and Al-Qaeda-linked Islamist fighters to seize the northern half of the country.
Credit: ISSOUF SANOGO
Share

There’s been another major terrorist attack. Gunmen stormed a luxury hotel in Bamako, the capital of Mali, this morning. At least 170 people were taken hostage and now there is an operation underway by Mali security forces to free them.

A journalist near the location of the hotel told several media outlets that the hostage-takers were releasing Muslims who could recite a declaration of faith, and detaining non-Muslims. At least three people are believed to have died so far.

The high-end hotel is a common place for foreigners to stay in Mali. Both Americans and French nationals are believed to be among the hostages. China’s state-run news agency reported that “many Chinese” were staying at the hotel.

No group has claimed responsibility for this latest attack, which comes less than a week after the attacks on Paris that killed 129 people. But Twitter feeds belonging to Islamic State members and supporters erupted in celebration.

An Islamic State militant had earlier told Reuters that the Paris attacks were in part retaliation for France’s 2013 military campaign to take back control of northern Mali from Islamic militants aligned with Al Qaeda.

The Tuareg are a traditionally nomadic ethnic group that lives mostly in the interior of the Sahara. After North Africa gained independence from French colonialists and the region was hastily divided up into modern states, Tuareg lands were fractured. They've been trying to find a home ever since.

A few months after the Tuareg took control of parts of northern Mali, the country’s president was ousted in a coup d’etat led by members of the military.

That made things a whole lot worse. In the ensuing months several different Islamic militant groups — including one affiliated with Al Qaeda — seized the opportunity to assert themselves. The Tuareg at first welcomed their help. They quickly came to regret that decision. By July 2012, the militants were in full control of northern Mali, where they began applying Sharia, a strict interpretation of Islamic law.

This was before the Islamic State. It was the first time that an Al Qaeda group tried to claim territory. Suddenly Al Qaeda had its own state. The West, of course, couldn’t have that. So it intervened. France, after some soul-searching, launched a sweeping military operation in January 2013 that drove the militants out of northern Mali. Those militants have been conducting terrorist attacks ever since.

Progress toward closing the gap in what women and men are paid for the same jobs is slow at best. The World Economic Forum said in a recent report that at this pace, it will probably take another 118 years before women all over the world enjoy the same compensation men do. So, mark 2133 on your calendar?

The World Economic Forum ranked the world’s countries by their level of wage equality between men and women. It found that Rwanda has some of the fairest wages around. What’s interesting is that Rwanda is also one of a handful of countries on the planet that has more women in the workforce than men.

The United States, if you were wondering, placed a very distant and disappointing 74th.