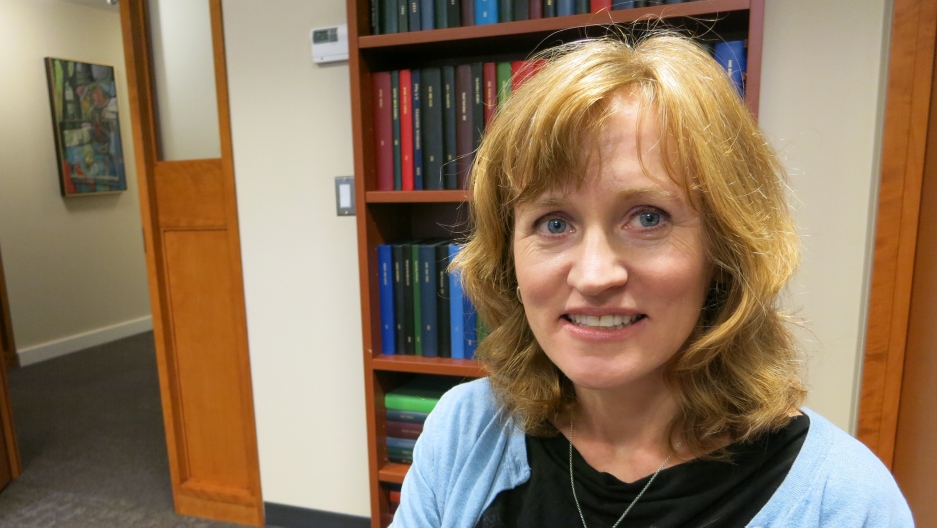 Jennifer Nagel, a philosopher at the University of Toronto, is among a group of people privately sponsoring a family from Syria to live in Canada.

Helping refugee arrivals find places to live, work, and go to school takes a lot of time and taxpayer money. In Canada, they've developed a unique system: ordinary citizens and residents share the load with the government and resettlement agencies.

With the latest refugee crisis from Syria, Canadians are again coming out by the thousands volunteering to help. Jennifer Nagel is among them. She’s the associate chair of the philosophy department at the University of Toronto.

“I’m an epistemologist, I work in the theory of knowledge.”

Two months ago, Nagel — like millions of people across the globe — was moved by the photo of a 3-year-old Syrian boy washed up on a beach in Turkey. So, she hatched an idea.

“I put up a Facebook post asking if there was anybody in my network who might be interested in sponsoring refugees, bringing them over. I’d heard about the private sponsorship of a refugees program in Canada.”

Quickly, 15 friends and friends of friends stepped forward. She showed me the group’s request for refugee profile form.

“It’s a very simple two-page form that any community group can fill out and just mail off to the government.”

The government did a background check on Nagel’s group — looking into tax returns, letters from employers and any criminal records. Everything checked out, so the Canadian government is now allowing the group to sponsor a Syrian family of six — a widow and five children living in a refugee camp in Lebanon.

The government also did a comprehensive security screening on the Syrian family, looking into their past history. Nagel says she’s not worried about potentially letting in bad guys. Her Syrian family has been identified as urgently needing protection.

Canada began encouraging small groups, of at least five Canadian citizens or residents, to sponsor refugees back in 1979 to help bring in additional Vietnamese. Since then, volunteers in Canada have helped resettle more than 225,000 refugees from across the globe, according to the Canadian Council for Refugees.

Canada is the only country that has the private sponsorship of refugees mandated into its immigration law. In 1986, the “People of Canada” were awarded the Nansen Refugee Award, presented annually by the United Nations High Commissioner for Refugees to an individual, group, or organization in recognition of outstanding service.

Nagel’s group, which they've named “Room for More,” is working to raise the required $33,000 to help support their Syrian family during their first year here. To do that, Nagel started a Facebook page and an online donation site.

“The money’s been coming in very rapidly. We’ve also had a lot of concrete offers of help: sofa beds, old dinette sets, mattresses.”

Raising funds and materials is the easy part.

“You have to develop a settlement plan and submit that along with your application to sponsor the family. You’ve really got to cover all practical needs that the family is going to have when they arrive in the country. So you’ve got to make sure that the children will be enrolled in school, the adults will be enrolled in English lessons. You promise to support them in looking for employment. You find them a doctor, find them a dentist. We’re going to sign up the 8-year-old kid in soccer lessons.”

Nagel’s group is on the hook for a year — after that, refugees are expected to be self-sufficient.

Privately sponsoring a refugee is complex. But the Canadian government offers training and support, and provides some funding to help the refugees. Local resettlement agencies also lend a hand.

In Toronto, the newly-formed group Lifeline Syria is recruiting, training, and assisting sponsors. Their goal is to help sponsor 1,000 Syrian refugees over the next two years.

“Our main focus is making everyone (private sponsors) feel that they’re being supported and the process is as easy as possible in quite a complex system.” said Alexandra Kotyk, project manager with Lifeline Syria. “We try and connect with all of the parties that need to be followed up with, we try and streamline paperwork, we try and give them training and resources.”

Nagel supports Lifeline Syria. Still, her group managed to navigate the process on their own. A refugee resettlement worker is helping with some logistics in Toronto, but Nagel says they’ll try and do as much as they can on their own when her Syrian family arrives.

“We are probably going to be dividing ourselves into different task areas,” said Nagel. “So, I can certainly see myself going grocery shopping with this family every weekend. I’d like to be involved with the kids. There are three teenage daughters; I have two sons but no daughters, so this could be fun for me. But we’ll see. It depends on the family as well, and it depends on how much contact they want with us. We want to respect their privacy. We want to be there for them, but we don’t want to be all over them.”

Nagel expects her Syrian family to arrive sometime before Christmas. By the way, they don’t speak English and she doesn’t know what they look like. She says they’re going to make a sign in Arabic and hold it up at the airport.

Studies have shown that private sponsorship of refugees has built stronger community ties between Canadians and incoming refugees.

“The refugees had access to the social networks of the sponsors increasing their own social capital,” said Naomi Alboim, a former deputy minister of citizenship and immigration for the province of Ontario. “The intercultural contact facilitated the integration of the refugees and created a more informed Canadian public …  Lifelong friendships were developed.”

That’s not meant to knock resettlement agencies. “The settlement counselors are experts in the field and are very familiar with all the services available,” adds Alboim, who is currently with the School of Policy Studies at Queen’s University.

And private sponsorship isn't a perfect system, of course. As noted, it's complex and requires private citizens and residents to raise their own money, which can be challenging. Critics contend that private sponsorship has allowed the Canadian government to shirk some of its own duties, to essentially download some of its work to civilians. That’s a worry now with the latest wave of Syrian refugees.

Canada’s new Liberal government recently pledged to settle 25,000 Syrian refugees in the next six weeks. (Though a new poll says a slight majority of Canadians think that’s too fast and several provincial officials have also expressed concern that speed is trumping security.) There are concerns that the Canadian government will use private sponsorship to help reach that target, which many argue would be breaking its promise.

UPDATE: Canada's government says its ambitious resettlement plan will focus on women, children and families. Unaccompanied men will not be included because of security concerns.