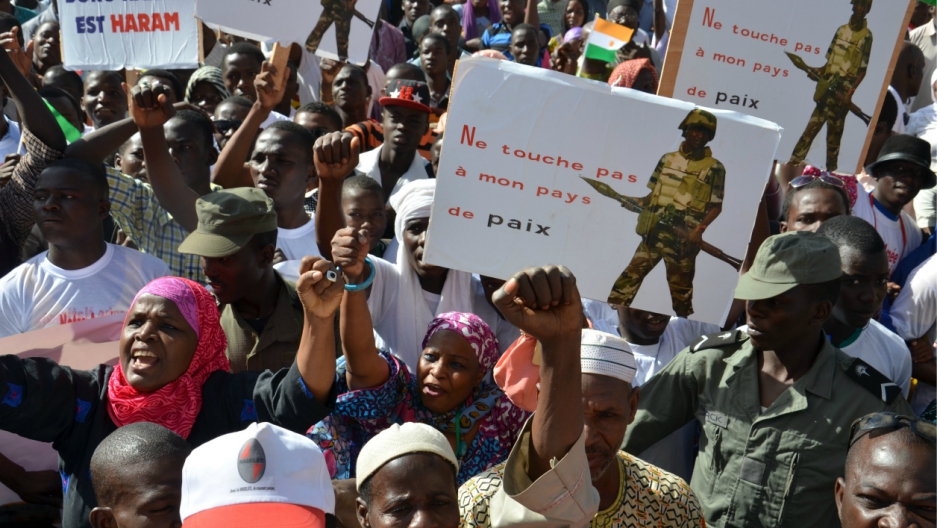 People hold signs reading "Don't touch to my peaceful country" during a protest against deadly raids by Boko Haram on Feb. 17, 2015 in Niamey. The radical sect struck across the border into Niger for the first time on Feb. 6, launching attacks on Bosso and the provincial capital of Diffa, both southeastern towns near Nigeria.
Credit: BOUREIMA HAMA
Share

In Nigeria’s northeast, where ordinary people have been targeted in horrific attacks since the militant Islamist group emerged in 2009, this week's news from the 2015 Global Terrorism Index won’t come as a surprise. But while the Islamic State (IS) has drawn the world's attention, there has been decidedly less international focus on Boko Haram’s campaign of terror in Africa’s most populous country and biggest economy.

Last year was particularly terrible. According to the index, released by the Institute for Economics and Peace, a think tank, Boko Haram caused the deaths of 6,664 people in 2014, mostly by guns and bombs. That’s a few hundred more than the high-profile IS. Seventy-seven percent of the people killed by Boko Haram were classified as private citizens, compared to 44 percent for IS.

More from GlobalPost: The real victims of Boko Haram

Nigeria was said to have experienced the largest overall increase in terrorist activity in 2014 — leading to a jump in deaths of more than 300 percent compared to 2013. "This is largely due to the increasing ruthlessness of Boko Haram,” the report said.

Some analysts have questioned the accuracy of the Nigeria figures, noting the serious challenges of getting accurate death tolls. But there is no doubt that scores of Nigerians have been killed by Boko Haram.

Earlier this year the group pledged allegiance to IS and its leader, and now considers itself the West Africa "province" of IS. Boko Haram, which is often translated as “Western education is forbidden,” is also known in Arabic as Jama'atu Ahlis Sunna Lidda'awati wal-Jihad, or “People Committed to the Propagation of the Prophet's Teachings and Jihad."

In a video released in March, Boko Haram’s leader Abubakar Shekau is seen swearing an oath of allegiance to IS. Shortly after, a spokesman for IS released an audio recording in which he accepted, and claimed that the "caliphate" had now expanded to West Africa and that "no one can stand in its path." But the exact nature and extent of the Boko Haram-IS relationship is unclear.

Together these two groups were responsible for 51 percent of the estimated 32,000 deaths from terrorist attacks in 2014, according to the index.

For more than six years Boko Haram has spread terror in northern Nigeria, with the goal of ruling the country and imposing a strict version of Sharia, Islamic law. The situation has intensified since January 2014 as the group stepped up attacks in Borno, Adamawa and Yobe states, seizing towns and territory.

But it has lost significant ground due to an ongoing military campaign by Nigeria and its neighbors, with President Muhammadu Buhari declaring that the group will be eradicated by the end of this year. Some analysts say that Boko Haram is returning to a bombing strategy due to the military pushback. Days after the terror attacks in Paris, militants launched two major bombings in Nigeria. In Yola, a city in northeastern Nigeria that became a safe haven for people fleeing Boko Haram, more than 30 people were killed Tuesday when a suicide bomber attacked a marketplace.

In Kano, twin bomb blasts Wednesday killed 13 people at a mobile phone market, and injured many more. The suicide bombers were both women, according to reports. The attacks had the hallmarks of Boko Haram, though the group did not claim responsibility.

Boko Haram stalks a part of the world — northeast Nigeria and border areas in neighboring Chad, Cameroon and Niger — that is far from any strategic Western locations. Their attacks haven't targeted Western institutions, with the one major exception being the 2011 car bombing of the United Nations building in Abuja.

As does IS, Boko Haram targets private citizens going about their daily lives: commuters at bus stations, shoppers and vendors at city markets, schoolgirls preparing to take exams. Mosques are frequent targets: The insurgents view Nigeria’s Muslims as insufficiently strict in adhering to Islamic laws.

In early 2014, on a reporting trip to Kano, a priest at Our Lady of Fatima Cathedral told me that he thought the security situation was improving in the city. There hadn’t been any bombings in nearly a year.

But Father Gabriel Ikor wisely warned never to underestimate Boko Haram: “When you think that all’s well, that’s when they strike.”

In late November of that year, 120 people were killed in an attack on Kano's Central Mosque. Two suicide bombers blew themselves up during Friday prayers, while gunmen opened fire on those trying to flee.

It was the 16th-deadliest terrorist attack of the year; according to the Global Terrorism Index, half of the world's 20 most fatal attacks were due to Boko Haram.