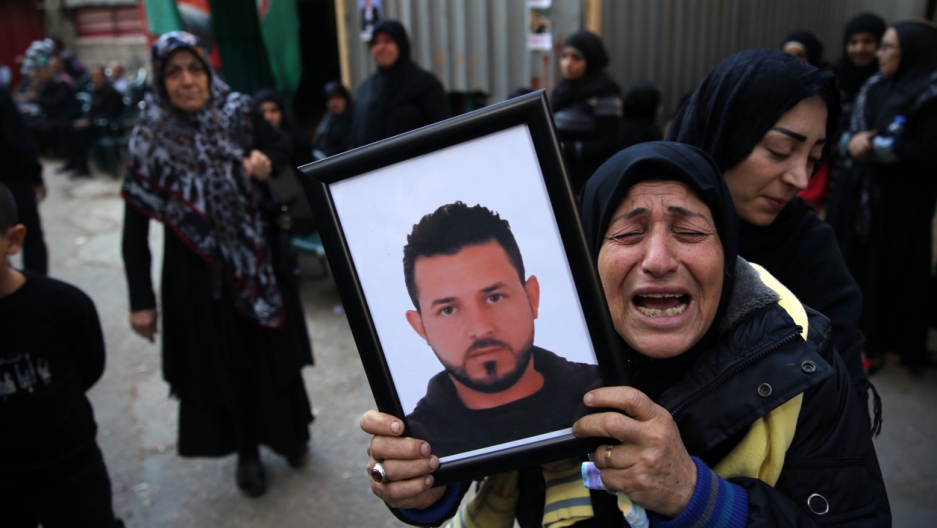 A relative mourns her loss after the twin bombing attack in Beirut on Nov. 13, 2015.
Share

It’s been confirmed: the Belgian man French officials believe was the mastermind of the Paris attacks — Abdelhamid Abaaoud — was killed in a raid Wednesday morning.

So that’s that. Abaaoud, however, was just one man. Several other suspects are still at large and the larger problem of the Islamic State has not gone away. To address it, French President Francois Hollande is hoping that the United States and Russia can bury their differences and coordinate on the battlefields in Iraq and Syria. He will be making back-to-back trips to Moscow and Washington next week to help make that happen.

Russia has been bombing Syria since early October. But it has mostly targeted Syrian rebel groups in support of Syrian President Bashar al-Assad. Some of those rebels are being supported by the United States, which believes Assad must go if the Islamic State is to be defeated. This is a major impasse that has yet to be resolved. So far there has been little coordination between the two military powers.

After the Islamic State took credit for the bombing of a Russian passenger over Egypt, however, Russia joined France in turning more attention to the Islamic State. It launched one its biggest bombing raids in decades on Tuesday, pummeling the Syrian city of Raqqa, which is the de facto home of the Islamic State.

There are signs that Russia and the West have arrived at some kind of détente, at least a temporary one, for their shared interest in defeating the Islamic State. Russia ordered its military to work with the French as “allies” on Tuesday, using carefully crafted language. Putin also huddled with Obama on the sidelines of the G20. On Wednesday Obama referred to Putin as a “constructive partner,” which was also carefully crafted language.

Even if these powers are able to coordinate in the war against the Islamic State, recent history demonstrates that more war might not be the best solution.

According to a newly released report, deaths from terrorism worldwide last year increased by 80 percent to the highest level ever. More than 32,000 people were killed in terrorist attacks in 2014, compared to about 18,000 the year before. Since 2000 there have been more than 60,000 terrorist attacks that have killed some 140,000 people.

So far in 2015 the Islamic State has credibly claimed responsibility for the deaths of 800 people outside of Iraq or Syria. Thousands upon thousands more have died at the hands of the Islamic State inside those countries.

In 2014 the worst terror offenders were the Islamic State and Boko Haram, an often-ignored terrorist organization based in Nigeria. Boko Haram made headlines for a while after it kidnapped more than 200 Nigerian schoolgirls, launching the global hashtag campaign #BringBackOurGirls. It never did bring them back. And the group has continued to indiscriminately bomb public spaces. On Tuesday it blew up a fruit and vegetable market in Yola, killing 38 people.

Like most conflicts in Africa, Boko Haram gets comparably little coverage. GlobalPost Senior Correspondent Erin Conway-Smith, however, visited Yola this year and interviewed victims of some of Boko Haram’s most heinous attacks. It’s a must-read.

“By all accounts, the number 88 stamped on each pill is a perverse tribute to one of the most riveting events in Myanmar’s history — a bloody 1988 uprising against military tyranny led by pro-democracy idol Aung San Suu Kyi.”

A months-long, in-depth investigation by Winn revealed how widespread the meth industry is in Myanmar. It supplies the whole region and is supported by the country’s military.

The country also just held its first free elections in a long time. Voters overwhelming chose the party of Suu Kyi in a move that will likely change Myanmar forever.

Now there’s a little pink pill to commemorate how the country got here. “The ’88 uprising offered a flash of hope that still resonates — so brightly, it seems, that drug lords can tap its symbolism to sell meth,” Winn writes.