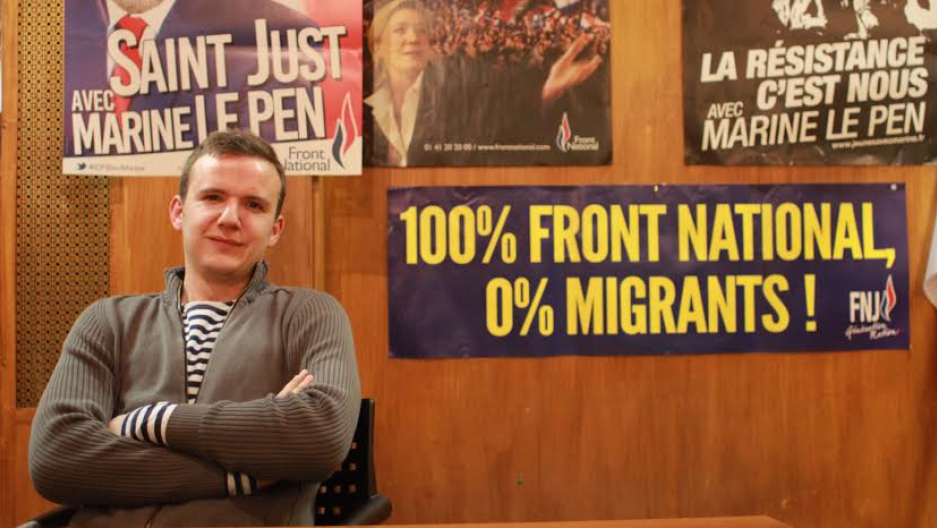 "If we don’t get power, we’re going to have a civil war in 10 years," says Cedric Cassagnes, one of the Front National youth leaders for the greater Paris region.

The Front National club room in the 13th arrondissement of Paris is like youth clubs everywhere: Coca-Cola in plastic cups; awkward flirting near the snack table. Someone has turned up on one of those weird razor skateboards with a handlebar.

Veronique Fornilli is one of the organizers of Wednesday night’s gathering. She’s in her early 20s, polite and efficient and friends with most of the people here. Her night shift as a nurse starts in an hour or two.

When I ask Veronique what kind of people come to a FN youth event, she laughs at my question. There’s nothing weird about being a Front National supporter, she explains. “We are normal people, young people! We go to the movies, we have some drinks sometimes: regular young French people.”

Since the terrorism attacks in Paris last week, Front National youth activists like Veronique are expecting a surge of support for their party. They are convinced that many more French people will now see things their way, the FN way. “I think a lot of people remember that Front National warned them a long time ago,” Veronique tells me.  “[Since the attacks] they’re seeing we were right all along.”

The Front National’s leader, Marine Le Pen, has built a career out of pushing the FN into the mainstream of French politics, shedding its old image as a racist and anti-semitic fringe group. And it is working. In 2012, Marine came third in the opening round of 2012 presidential election.

For years, her message has been that France and French culture is under threat from immigration — and particularly Muslim immigration.

I ask Veronique about the party’s reputation for racism. That’s all wrong, she says. We welcome people of any country or color — just so long as they love France.

Cedric Cassagnes is another of the National Front activists at tonight’s event. He works at a bank, near one of the cafes that was attacked by gunmen on Friday. He heard the gun shots and sirens himself, before his Facebook feed started going crazy. But he and his friends weren’t surprised by the news, he says.

“For us, we were prepared for this tragedy. In comparison to the rest [of France] we were not shocked. We knew this would happen.”

For Cedric, the attacks were expected because they are part of a larger conflict: the clash between Islamism and France. He is not a racist and does not have a problem with Muslim people, he says, but Islamic law is not compatible with French culture. And with immigration continuing, the future is only going to get more violent.

The evening’s lecture begins in the club room. An invited author speaks at length about the history of the French language, the greatness of French culture. On the surface it is all quite dry, quite academic.

But that’s the point, says Cedric. France’s new leaders need to be educated properly, to understand their history and culture. That way they will be ready to govern ready for power. He himself plans to run for office eventually.

On the wall across the room is another campaign poster.  It shows a young woman with the French flag painted on her face. And next to her a woman wearing a burqa. The slogan: “Choose your ghetto. Vote Front!” Cedric explains it’s a message to about the only two options facing France. “Choose between the French culture and the French values. Or Islamic laws. Vote for us or vote for Islamic laws.”

As the end of the evening, the speaker is wraps up with a Q&A. I find myself scanning the titles on the bookshelves near where I’m sitting. Cedric has explained that only patriotic books are allowed on the shelves — no ‘socialist’ titles. Near where I am sitting that means book like: “Will the 21st Century Be The Muslim Century?” and lots of hardbacks on French history. I spot a copy of the memoirs of Leni Riefenshahl’s, the Nazi filmmaker.

Then something unexpected happens. After one of the questions from the floor, the topic of racism comes up.

The speaker begins talking about the freedom to be a so-called racist:  “If I’m a ‘racist’, well then, I’m a racist. Who is going forbid from me being a racist?” he asks.

A guy at the back answers: “Taubira!” He means France’s socialist justice minister, Christiane Taubira, who is black.

Céline Hussonnois contributed to this report.