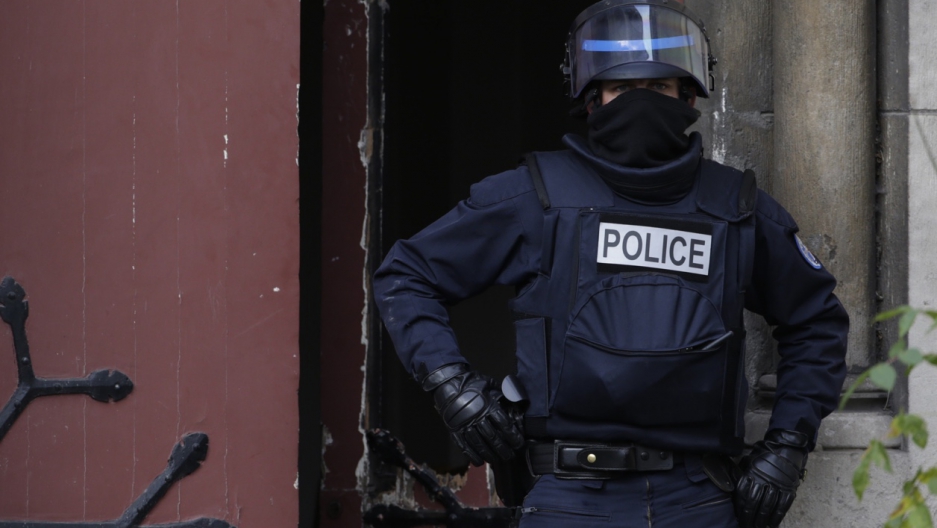 A policeman stands guard in front of a church in the northern Paris suburb of Saint-Denis on Nov. 18, 2015.
Share

French police appear to have zeroed in on the person they believe is the mastermind of the Paris attacks. In an early morning raid in a neighborhood north of the capital, security forces stormed an apartment.

It must have been the right place, or close to it, because several people inside the apartment opened fire on the police. One woman killed herself when she detonated an explosive vest. Another man died from both gunshot wounds and an exploded grenade, police said. Seven people were arrested in and around the home.

Authorities have not released any identities, but the target was Abdelhamid Abaaoud, the Belgian citizen who police think planned the whole thing. Abaaoud had been a target of airstrikes in Syria last year. At the time, according to The New York Times, Abaaoud’s own family said they hoped he had been killed in the strike. He wasn’t. And he made his way back to Europe.

The raid on Wednesday morning lasted about seven hours. Several police officers were “lightly” wounded. But a police dog named Diesel was killed. That’s why #JeSuisChien started trending on Twitter.

A little over a week ago, everything changed for Myanmar. It was enough to give us all hope that an end can come to even the world’s most intractable problems. Voters turned out in large numbers to cast ballots in free elections. And then they straight-up denounced the military leaders who had lorded over them for decades.

About 80 percent of eligible voters participated. And 75 percent of them voted for the National League of Democracy (NLD), the party led by Nobel Peace laureate and activist Aung San Suu Kyi. As GlobalPost Senior Correspondent Patrick Winn writes, the NLD pretty much “brands itself as the antithesis of the military tyranny.” It would have been hard for the military to lose any worse.

There is a lot to be happy about. There are also lots of challenges ahead. Suu Kyi and her party will still have to oppose the military, which by constitutional right is guaranteed a quarter of seats in parliament. The military also happens to be backed by half a million troops with attack aircraft and armored vehicles. So the new majority — assuming the military lets it assume power, as promised — will be walking a fine line.

The new government, which will hopefully take power early next year, will also have to address multiple civil wars smoldering in the hills, rampant child labor, toxic anti-Muslim bigotry, a massive military-backed meth trade, and probably a few seething generals plotting some sort of payback. It’s going to be an interesting few years ahead. Here are GlobalPost’s eight takeaways from this historic month for Myanmar.

Several American governors are doubling down on their refusal to take in any Syrian refugees. It is all a reaction to the Paris attacks, which is odd because no Syrian refugee was so far found to have been involved in the attacks. In fact, the attackers were likely all European citizens.

There are other reasons why refusing to take in refugees is a terrible idea. Here is a list of them for you. Despite all this, New Jersey Governor Chris Christie — who also happens to be running for president — came out and actually said publicly that he wouldn’t allow even “a 5-year-old Syrian orphan” to resettle in New Jersey. Syrian orphans everywhere probably just breathed a sigh of relief.

It’s okay though, there are other American governors who are happy to take in the refugees (not that governors have the authority to accept or deny refugees, anyway). And there’s also Scotland, which has reacted very differently.