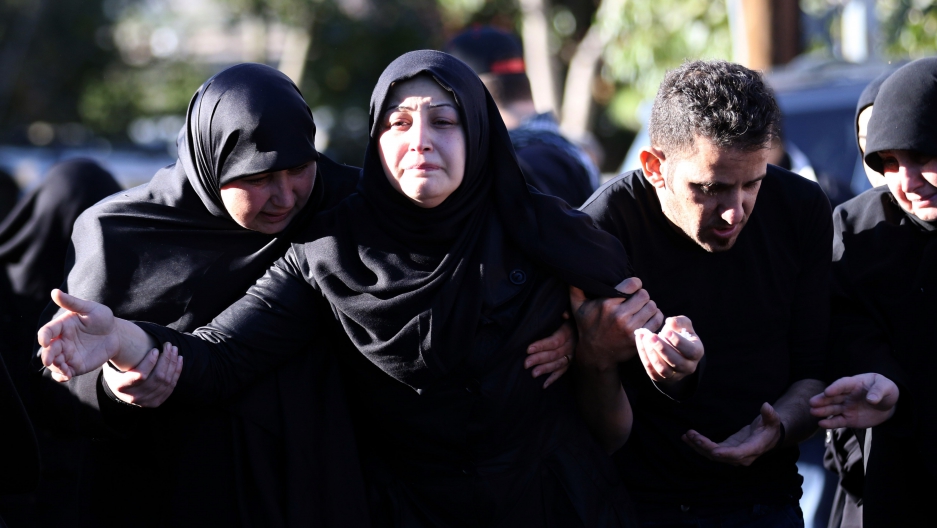 The wife (C) of Adel Termos, who was killed in a twin bombing attack that rocked a busy shopping street in the area of Burj al-Barajneh in Beirut's southern suburb, mourns during his funeral in the village of Tallussa in the Nabatiyeh governorate, south of Lebanon on November 13, 2015.
Credit: MAHMOUD ZAYYAT
Share

BEIRUT, Lebanon — It was a scene of chaos and confusion. Smoke filled the air and shattered glass crunched underfoot as the injured were raced away from the scene. Bodies lay strewn on the ground.

A bomb had just exploded on a busy shopping street in Bourj al-Barajneh, a neighborhood in Beirut’s southern suburbs. It was early evening and the street was packed with people, some returning home for the evening, others meeting friends.

Adel Termos, a 32-year-old father of two, had been drinking coffee at a cafe on the street when the explosion happened. His story of heroism during the attacks has spread far and wide in Lebanon, and thousands have paid tribute to the man who may have saved hundreds of lives.

More from GlobalPost: Witnesses to Beirut bombing describe carnage in the street

He survived the first bombing, and was standing about 100 meters away from where the explosion took place. This is when his neighbor, Hussein, saw him. Hussein had been helping the wounded and moving bodies at the site of the first explosion.

“I was carrying my injured friend to the hospital. I was about 15 meters away [from where Termos was standing].”

Then there was a commotion. Hussein saw another man he knew from the neighborhood, Mahmoud, with a gun drawn.

“He shot a guy on a motorcycle with another guy. So I knew they [on the motorcycle] were bombers. Then the guy who wasn’t shot dropped the motorcycle and was running towards the mosque where people are praying.”

That’s when Termos sprang into action.

“Adel pushed him away from the mosque and hit him. The guy shouted Allahu Akbar and exploded himself while Adel had hold of him. He saved about 200 people who were in the mosque.”

Hussein pointed to a blood spatter on another building near the site of the blast. “It is a school.”

Hussein’s account, given to GlobalPost on the night of the bombing and in the days following, matched those given by other witnesses.

Termos' story spread on social media, and his actions drew praise from across the world.

Hero. Adel Termos tackled a suicide bomber who was heading toward a crowded mosque in Beirut. RIP pic.twitter.com/ECgHT7tVb1

He leaves behind his wife Bassima, 6-year-old daughter Malak and 2-year-old son Akram.

Bassima Termos told CNN on Monday: “The kids and I are all doing fine. He made us proud, put our heads up high, what more do I need? He gave me dignity, pride, and respect."

Forty-three people were killed in the bombings, which were claimed by the Islamic State (IS). It was the deadliest suicide attack to hit Lebanon since the end of the country’s civil war in 1990.

The southern suburbs of Beirut are no strangers to such attacks. The largely Shia neighborhoods were the target of a concerted campaign in 2013 and 2014 carried out by radical Sunni militant groups from Syria, chief among them IS and the Al Qaeda affiliate Jabhat al-Nusra.

Both groups claimed the attacks were retaliation for the involvement of Hezbollah — a Lebanese Shia militant group and political party — in Syria’s civil war.

The party has sent thousands of fighters to Syria to join President Bashar al-Assad’s forces in their war against rebels trying to oust him. Hezbollah has fought both the radicals pitted against Assad and more moderate groups.

In its statement claiming responsibility for the bombings, IS promised more attacks against Shias. The group said two Palestinians and one Syrian had carried out the blasts.

"He is a guy that everyone loved and respected,” he said.