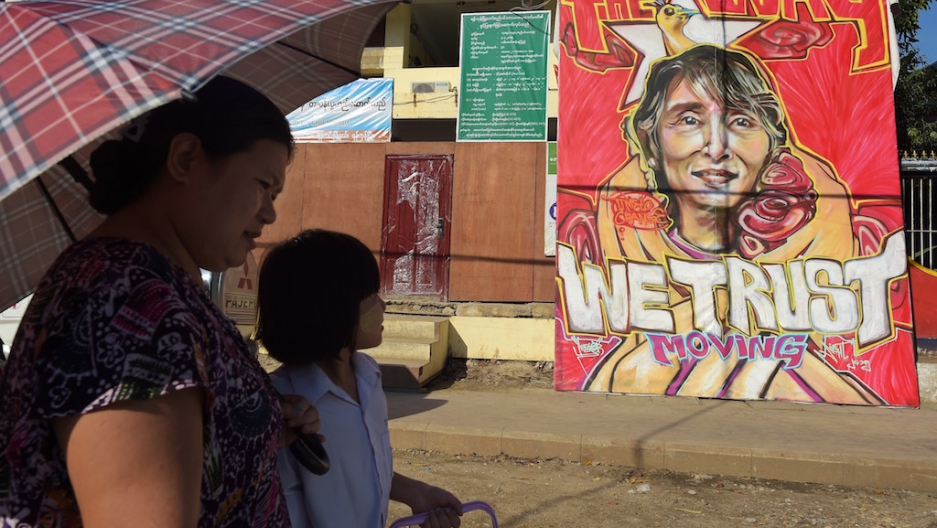 YANGON, Myanmar — Somewhere in Naypyidaw, Myanmar’s garishly constructed capital for ruling elites, army generals in khaki suits are choking on a bitter truth: the people they have lorded over for decades really can’t stand them.

On paper, the election was largely a standoff between Aung San Suu Kyi, the nation’s idolized dissident-in-chief, and a ruling party backed by the domineering army. But in effect, it was a referendum on five agonizing decades of military rule.

The outcome: a resounding “get lost” to the army from the bulk of Myanmar’s electorate. Around 80 percent of eligible voters turned out for the first — mostly — legit nationwide poll since 1960, a few years before the military seized power.

More than 75 percent of those voters chose Aung San Suu Kyi’s National League for Democracy (NLD) party, which brands itself as the antithesis of military tyranny. The word “landslide” doesn’t do it justice.

Why is this such a big deal?

Unless the military voids the election — which they’ve done before — we’re witnessing the bloodless ouster of one of the world’s most reviled regimes.

Myanmar’s army-backed ruling party did its best to convince the public that ending their reign would bring on Arab Spring-style mayhem to the streets. But few were buying it.

“We’ve woken up. We’re no longer afraid,” says Aung Kyaw Kyaw, a 45-year-old lawyer who voted in the election. “The system has been put into place for us to kick the military out. We just needed to summon the people.”

Supporters of the National League for Democracy gaze at a screen announcing election results outside party headquarters in Yangon, Myanmar. The party's victory in Nov. 8 elections triggered celebrations across the nation.

There are plenty of problems ahead. The new government, expected to take power early next year, will have to cope with the bleak legacy of army rule: civil wars smoldering in the hills, rampant child labor, toxic anti-Muslim bigotry and probably a few seething generals plotting some sort of payback. Running Myanmar is one of the hardest jobs on the planet.

Complicating the situation further is a constitutional rule, written by the army, that effectively bars Aung San Suu Kyi from assuming the presidency. No matter, she says, she'll just lead the nation through a proxy president under her control.

That sounds rough. So should we be happy about this election or not?

Yes. You’d have to be truly cynical not to be.

Anyone in Myanmar under the age of 50 has spent their entire life under a kleptocratic military regime. The army has hoarded their natural bounty, let schools and hospitals crumble and tortured those who dared complain.

But to vote — especially for the army’s rivals — is to finally access just a smidgen of power and a small say in how the country should be run.

Aung San Suu Kyi is both a globally beloved Nobel Peace Laureate and a shrewd political  strategist marred by flaws. To the people of Myanmar, she embodies the spirit of her father, a martyred revolutionary hero who helped kick out British colonial rulers.

But you don’t have to adore her or her party to feel inspired by this election.

The election has proven cathartic for many people in Myanmar. They deserve to bask in the election’s afterglow. Many have been partying their faces off.

A fan of Myanmar's National League for Democracy snaps a selfie outside the party's Yangon headquarters during a gleeful celebration on Nov. 9.

Will Aung San Suu Kyi seek revenge against the army for exploiting the country for so long?

No. Shortly after the election, she told the BBC that “we are not going in for vengeance” or a “series of Nuremberg trials.”

She’s not just being gracious. Her party can’t take down a military backed by roughly half a million troops plus attack aircraft and armored vehicles.

But she also can’t risk enraging an army whose officers will comprise a quarter of the new government’s positions. Under a constitution written by the army, 25 percent of parliamentary seats are reserved for military appointees. The military will also control the police force. Their cooperation will be needed to enforce any laws passed by the new government.

What about those civil wars in the hills? Can Aung San Suu Kyi end them?

Not really. Thanks in part to the colonial Brits, who drew Myanmar’s modern borders, the country includes large ethnic groups that would prefer autonomy. For decades, they have tried to fend off government control with guerrilla brigades.

But these grisly wars are waged by the military, which Aung San Suu Kyi’s party will have little to no control over.

To its credit, the army is currently pushing for a nationwide cease-fire agreement. So far, only eight of the 15 major armed groups are on board.

Myanmar is also an infamous producer of hard drugs. Can she at least shut down that trade?

Again, not really. Much of the region’s go-to drug — little pink meth pills — is churned out of lawless regions run by militias in the northern borderlands.

Parts of this billion-dollar trade are run by ethnic rebels. But as a GlobalPost investigation recently revealed, many militias overseen by Myanmar’s own army have also become key players in the drug trade.

Trying to dismantle these pro-government, drug-producing militias would lead to certain bloodshed. It would also weaken the army’s control over far-flung terrain.

Aung San Suu Kyi doesn’t have the authority to make this happen. Nor is she likely to provoke the military by making such demands.

Well, then what can Aung San Suu Kyi do to heal the country?

Plenty. She can attempt to overhaul the nation’s decrepit hospitals and schools. She can limit corruption by demanding high standards from her own party acolytes. She can manage the torrent of foreign aid that is likely to pour in once the NLD takes the reins.

She can also reassure Myanmar’s Muslims — who in recent years have experienced mob attacks and hate campaigns led by Buddhist monks — that they have a rightful place in Myanmar.

Wait. Hasn’t she been accused of neglecting Muslims?

That’s because, even among many of her supporters, the Rohingya are widely disliked and erroneously viewed as an invading force from neighboring Bangladesh.

But the rest of Myanmar’s Muslims — many of them well-to-do descendants of laborers and administrators brought over during British rule — are expecting her to prove more welcoming.

During the election, the NLD flat out refused to field Muslim candidates, says Sithu Maung. He’s a 28-year-old Muslim and former political prisoner who has endured torture at the military’s hands. He’s also an Aung San Suu Kyi devotee who’d hoped to run with her party.

“We still support her and look up to her,” Sithu Maung says. “What choice do we have? We obviously don’t support the military. So the choice for Muslims is very clear.”

“I am a citizen first, Muslim second,” he says. “Surely she can use Muslims to rebuild our country.”

It sounds like Myanmar is still mired in problems. Are you sure we’re happy about this election?

Yes. Because somewhere in Naypyidaw, a few generals may be brooding over glasses of scotch and soaking up the shame of their defeat. And that’s an image worth savoring.