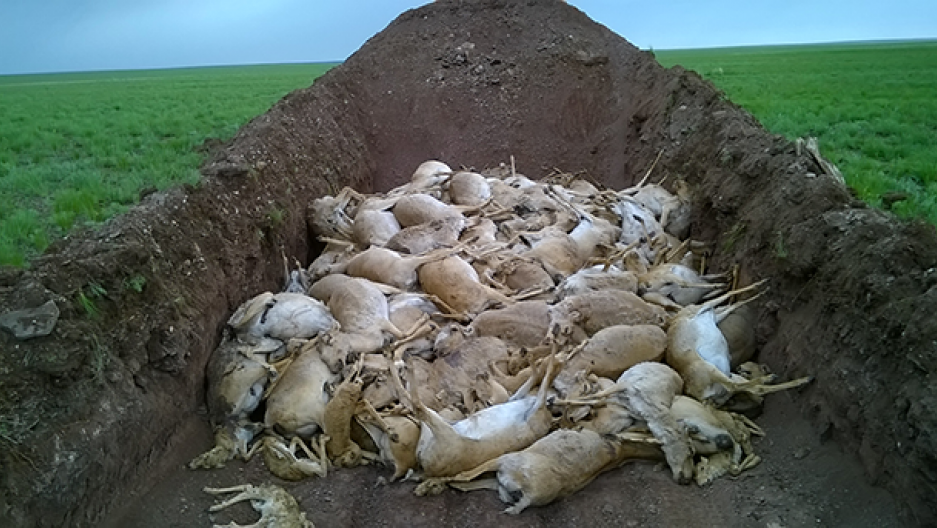 A mass grave of Saiga antelope. A mysterious disease has killed off nearly 80% of the Saiga population in Central Asia

The Saiga — tawny, bulbous-nosed antelopes that have roamed the desert steppe of Central Asia by the millions since the days of the woolly mammoth — are suddenly falling to a mysterious disease that has killed nearly 80 percent of the population, and scientists are scrambling to understand why.

Dr. Richard Kock, of the Royal Veterinary College in London, who has studied the saiga population, was actually on the scene when this tragic event began to unfold. He says it was unlike anything he has ever witnessed.

“It started with just a few and then gradually gathered pace over two or three days,” Kock explains. “The best description is that they were dying like flies. Eventually the landscape was completely littered with these animals…From moving and eating normally to death was just a matter of hours. So it was hopeless. We wouldn't have had a chance of doing much to help individuals.”

The saiga is a very unusual, ancient animal that predates the wooly mammoth. It is highly adapted to the extreme environment of the Central Asian steppe, where temperatures can range from 49 degrees below zero to 113 degrees. They migrate over huge distances. They are also one of the fastest hoofed animals on earth, capable of reaching speeds of up to 70 miles per hour.

As recently as 2014, the entire saiga population was about 300,000. The central group of about 250,000 is the key population, Kock says. When the die-off began, Kock and his colleagues monitored two additional population sites, one of about 60,000, another of 8,000. Gradually it became clear, however, that there were about 15 different die-off sites.

After the event, the Kazak government agreed to do a census to try to establish the mortality rate. They found that, at most, only 30,000 out of the 250,000 central population survived, Kock says.

But the most surprising thing was that in all of those aggregations, the death rate was 100 percent among animals that got sick. “I've worked in this field of infectious diseases for 35 years and I have never seen anything like that,” Kock says.

“From an epidemiological perspective, it was too quick to be an infectious disease,” Kock explains. “Transmission of an organism, like a cold virus or a gut pathogen or something, would take weeks, if not months, to move through a population of that size. This whole event was more or less over in a matter of days.” 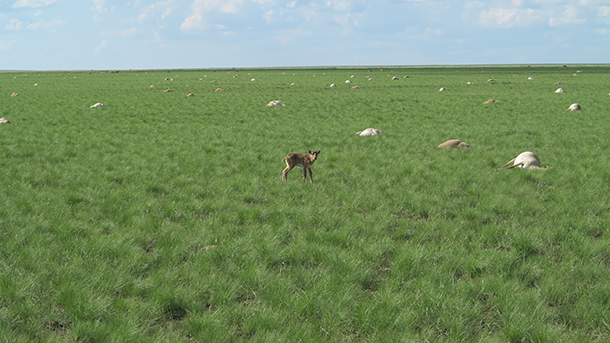 A solitary saiga stands in a landscape littered with carcasses.

After 32 in-depth postmortem examinations, Kock and his colleagues narrowed the cause to a bacteria called Pasteurella multocida, which is associated with a disease called hemorrhagic septocemia.

Pasteurella multocida is a ‘commensal parasite,’ which means that it can be latent. That is, while not a helpful bacteria, it is typically a neutral bacteria on the skin or in the body of an animal, that lives off of available nutrients. But under certain conditions, the bacteria can become virulent, Kock says, invading the body and causing a disease that leads to bleeding in the internal organs. The question is, what set the bacteria off among the saiga?

Some evidence suggests these opportunistic bacteria can be temperature sensitive. If the temperature suddenly rises in the environment where the bacteria live, they can suddenly switch to virulence. Stress can also cause this to happen, Kock says.

In domestic animals, the disease has often been associated with things like transportation — if you put cattle in a truck and drive them across United States, quite often they get what is called transport fever and that is related to the Pasteurella organism, Kock says.

“So we know stress is involved and the immune system is involved. [Now] the question is. what led to the immune system collapsing across a whole population,” Kock says. “Were talking about an area of 250,000 square kilometers. We're talking about 15 populations, varying from a few thousand to 60,000 in each of those aggregations. We're talking about synchronicity in terms of the individuals, as to their suddenly getting this disease. It's the most extraordinary phenomenon. It's like somebody waved a wand,” Kock says.

“Clearly we need to look at some overarching factors,” Kock continues. “Something in the environment that was affecting all the animals at the same time, as they developed this disease.”

Kock believes extreme weather was the most likely trigger. Just before the die-off, temperatures had risen quickly to 98 degrees and then dropped overnight to 23 degrees. But Kock suspects there is something more going on.

“If we look retrospectively, we see that 10 to 15 years ago the pattern of temperatures was in a lower range," he explains. "With climate change, we're seeing greater fluctuations, and this is an example of it, I think. Temperatures are rising very high at a time of year when that would not normally happen and then dropping very precipitously. So the range of drop is much greater than would've happened maybe 200 years ago, 300 years ago.”

“So, in a sense what we have here is a perfect storm and the thresholds for something like this to happen are reducing, and we can probably blame climate change for that,” Kock concludes.