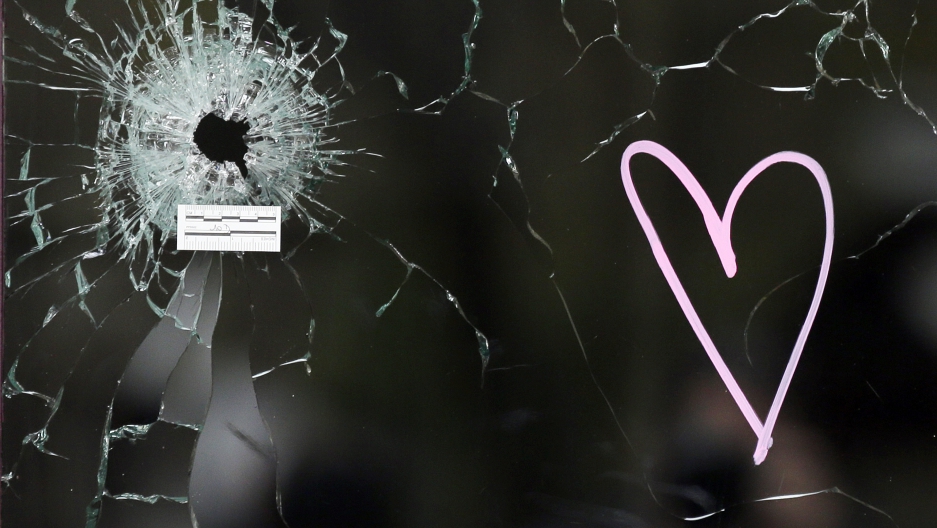 A bullet hole near Le Carillon restaurant, one of the attack sites in Paris.

The chaotic Balkan Wars wound down more than 15 years ago. But their aftermath lives on, possibly stretching all the way to the Paris attacks last Friday.

Eastern Europe is the likely source of the high-powered rifles the assailants used in Paris, according to analysts.

"At the end of the war, there were some 4 to 5 million semi-automatic weapons sloshing around the Balkans," says author Misha Glenny. "There were so many of these weapons that the price came down pretty rapidly, and you can now get an AK-47 from between $300 and $500, roughly speaking, on the black market."

German authorities are investigating whether a man arrested last week in Bavaria with assault weapons and explosives in his vehicle can be linked to the terrorist attacks. The  Montenegrin man was transporting eight Kalashnikov rifles with ammunition, two handguns, a revolver, two hand grenades and TNT.

"He was from what looks like to be a standard Balkan syndicate that was sending weapons up to Paris just at the time when the Islamist terrorists had put in a big order for them," Glenny says.

The criminal trading syndicates that emerged during the Balkan wars initially sold untaxed cigarettes and drugs, and trafficked women into the European Union. Since then, the same networks have been used to bring hundreds of thousands of weapons into Europe, according to Glenny.

"You have an open border policy for much of the European Union and that means it's easy to ship guns ... almost anywhere on the continental European Union," he says. "You can't get it into the country where I live, the UK, so easily because they do not have the same open borders."