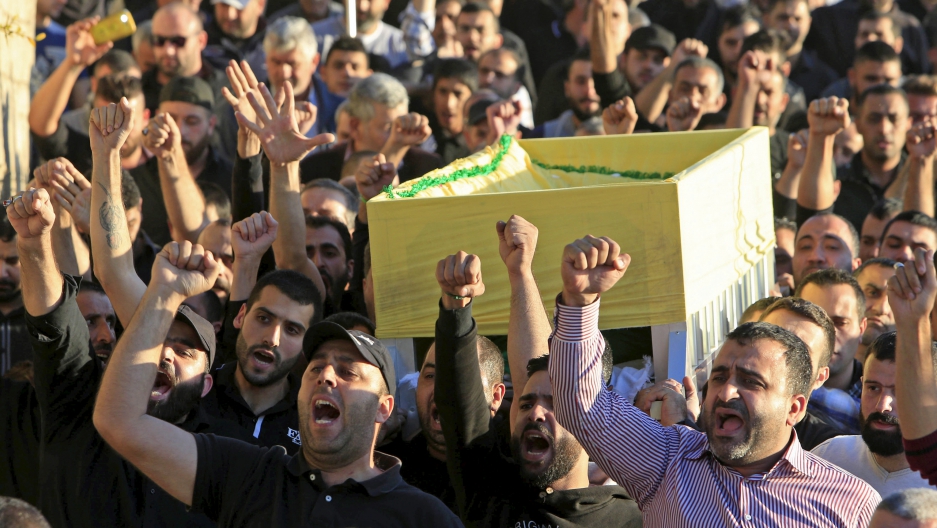 Relatives and Hezbollah members gesture as they carry the coffin of their comrade, Ali Abbas Dia, who was killed in the two explosions that occurred on Thursday in Beirut's southern suburbs, during his funeral in Baflay village, southern Lebanon November 13, 2015.

The terrorist attacks on Paris are resonating with people around the world.  That's true for blogger Elie Fares, a physician living in Beirut.

Beirut came under attack last week, a day before Paris. ISIS has claimed responsibility for two bomb blasts that hit a busy shopping street. More than 40 people were killed and over 200 more injured.

In his blog, A Separate State of Mind, Elie Fares, a physician living in Beirut writes on the day following the Paris attacks: “I woke up this morning to two broken cities. My friends in Paris who only yesterday were asking what was happening in Beirut were now on the opposite side of the line.

"Both our capitals were broken and scarred, old news to us perhaps but foreign territory to them. Today, 128 innocent civilians in Paris are no longer with us.

"Yesterday, 45 innocent civilians in Beirut were no longer with us. The death tolls keep rising, but we never seem to learn. Amid the chaos and tragedy of it all, one nagging thought wouldn’t leave my head. It’s the same thought that echoes inside my skull at every single one of these events, which are becoming sadly very recurrent: we don’t really matter.”

Does Beirut matter? Is it even on the radar compared to the world’s reaction to Paris?

“When my people died on the streets of Beirut on November 12th, world leaders did not rise in condemnation,“ writes Fares,  “There were no statements expressing sympathy with the Lebanese people. There was no global outrage that innocent people whose only fault was being somewhere at the wrong place and time should never have to go that way or that their families should never be broken that way or that someone’s sect or political background should never be a hyphen before feeling horrified at how their corpses burned on cement.”

In an interview, Fares talked more about this moral discrepancy, and why the horror that happened in Beirut last week just didn’t command the same attention as Paris:

By way of contrast, after the Paris attacks, there was an immediate outpouring of expressions of concern, solidarity and compassion for the victims.

“At first it made me feel good that there’s this shared feeling of shared humanity among everyone, and that regardless of where you come from or your country or your race, people were feeling sorry for the French victims,” says Fares.

“I thought that was very nice to see, but then when you think that my own city was  torn apart by violence which is not really commonplace for us anymore, I mean I’m not bitter, I’m not a bitter Lebanese, over the years we’ve come to grasp the notion that we don’t really matter in the global sense ... but it’s not okay to be silent about it, and it’s always important to raise your voice by highlighting how different the response to the attacks in Paris versus to the attacks in my city were, and to try to say, let’s talk about it.”

“It would be nice,” says Fares, “if someone would recognize our plight in Beirut every now and then.”

You can read more of Fares reflections here: From Beirut, This Is Paris: In A World That Doesn’t Care About Arab Lives.