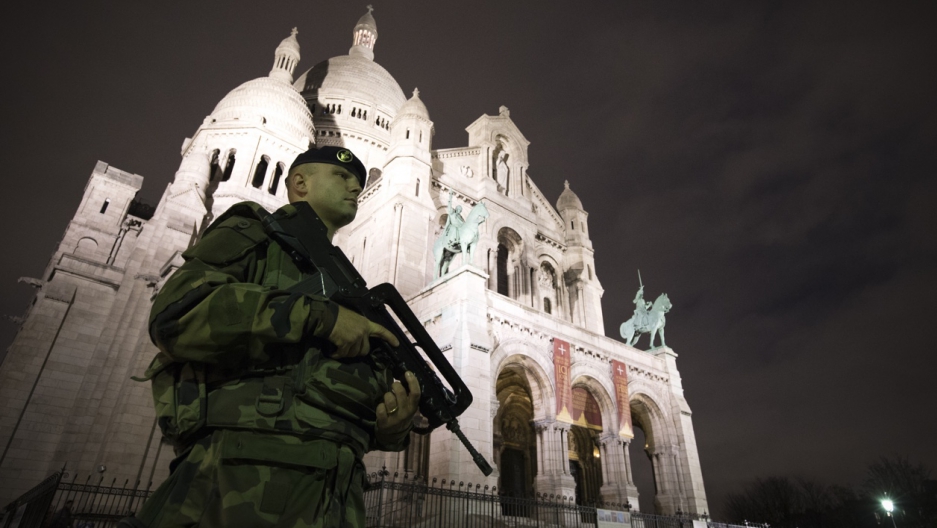 A French soldier in front of the Sacre Coeur Basilica on Nov. 16, 2015 in Paris, France.
Share

The French government is reacting to the Paris shootings as if following a script. It has already flexed its military might, launching symbolic airstrikes on Islamic State targets in Syria that were handed to them by the Americans.

Now it is talking about amending the Constitution so it can have the “flexibility” to conduct police raids without a warrant and place people under house arrest. And then — again, little surprise here — French President Francois Hollande said he would seek broader surveillance powers.

These are more or less the steps most governments go through when terror strikes. The United States after Sept. 11, 2001 immediately retaliated against Al Qaeda in the mountains of Afghanistan. It then passed the Patriot Act. The increased powers of the government to monitor its own citizens at home has been the subject of intense controversy ever since.

The thing is, France already has its own Patriot Act. And it already goes far beyond the American version. France has long had some of the Western world’s harshest counterterrorism laws. These laws were expanded after the Charlie Hebdo shootings in January to allow intelligence agencies to collect metadata in bulk — that controversial practice embraced by the US National Security Agency.

All that surveillance and police authority was not enough to prevent the Paris attacks on Friday, even though the mastermind and others involved were from a neighborhood in Belgium — one that's right next door to France, and well-known as a place where radicalism thrives. Turkey even warned the French government that the attack was coming. Yet it still happened. So now the government wants even more power.

The neighborhood in Belgium that is notorious for producing radicalized Europeans is called Molenbeek. Several of the alleged organizers of the Paris attacks came from there. It’s an immigrant neighborhood, mostly Moroccan immigrants and their descendants. About half the population is Muslim.

Right-wingers call the neighborhood "Mullahbeek." Belgian authorities have at times promised to “cleanse” the neighborhood, using the kind of language that raises alarm.

Molenbeek wasn’t always this way. And there are reasons why it is this way now. The primary driver of Molenbeek’s problems is unemployment. Among people under 35, unemployment is more than 30 percent. That’s a lot of young people with not a lot to do. The neighborhood is made up of tightly packed row houses and is severely overcrowded.

The old industrial neighborhood is just a short walk from the chic cafes of downtown Brussels. But few of the well-heeled shoppers dare venture over the narrow canal that separates the two districts of the city.

Clashes between police and locals instilled distrust in authority in recent years. And then came the wars in Syria and elsewhere in the Middle East, which have fueled radicalization among the neighborhood’s disaffected youth. Here’s a thought-provoking quote:

"My dad was a steel worker, and when our parents' generation came over here they focused on their work and the education of their children," Noureddine Imnadine, a Moroccan-born architect, told GlobalPost in 2012. "Many of us studied hard and did well, became architects, engineers, entrepreneurs, but nobody talks about that. Now times are different, there's not so much work around for this younger generation, so you have these kids hanging around on the streets, feeling excluded, stigmatized, angry. We need a social framework for these kids, to get them engaged in work or in some activities to get them off the street."

A couple dozen American governors have their own ideas, too. Doing the good work of thinking about the “safety” of their state’s residents, governors around the United States yesterday suddenly felt the urge to announce that they would not allow Syrian refugees to resettle in their states. Humanitarians, all of them.

US President Barack Obama earlier this year called for the immediate resettlement of 10,000 Syrian refugees in the United States. That is a tiny, tiny, miniscule fraction of the number of refugees needing homes around the world right now. Turkey alone has taken in some 2 million Syrians.

Obama’s announcement followed a wave of goodwill after a Syrian toddler seeking safety washed up drowned on a Mediterranean beach. Australia had just announced it would take in thousands of refugees. The European Union had agreed to take in 120,000. German Chancellor Angela Merkel was riding high as the world celebrated Germany’s response to the crisis.

Times, though, changed. Germany has already rolled back some of its promises. After the Paris attacks, the whole of Europe is debating ways to better secure borders. The refugees, of course, are not really the problem. War is. Most of these refugees are fleeing the very same terror that struck Paris.

All of this seemed lost on those US governors yesterday. Also lost on them: They don’t actually have the power to deny refugees homes in their states. That lies solely with the federal government.