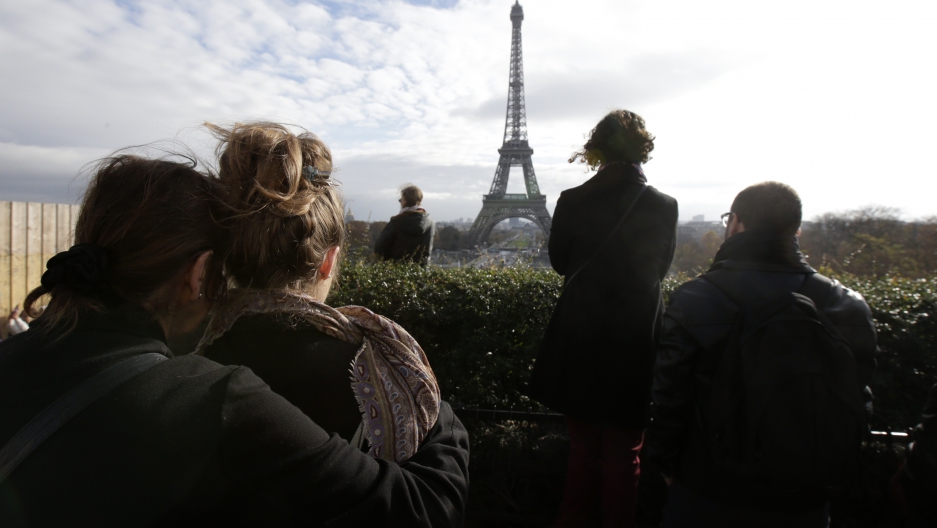 People observe a minute of silence at the Trocadero in front the Eiffel Tower to pay tribute to the victims of the series of deadly attacks on Friday in Paris, France, November 16, 2015.

This weekend's attacks in Paris have revealed a flip side to the City of Light. Why has France become such a target of Arab extremists? Many lifelong French citizens are Muslim, and the Muslim nation of Algeria was actually part of France in the 20th century.

“France is becoming a soft target in Europe,” says Samuel Laurent, author of "Al-Qaeda in France" and "The Islamic State.” “We have a very large community of Muslims in France, so therefore you just have to do a bit of math among this community that is mostly moderate — obviously we’re going to find some people that are sympathetic to the ideas of the Islamic State.”

“France is becoming weaker and weaker under the pressure of both the internal Muslim community that is getting radicalized, and also from the people coming back from Syria,” he says. “The numbers have been grossly underestimated by the French authorities.”

About 30,000 foreign fighters have joined ISIS, and about 1,800 French citizens are thought to be working jihadist networks across the globe, according to our partners at The New York Times.

“We saw something that is unprecedented in Europe, and probably unprecedented since September 11th in the US in terms of coordination and sophistication,” Laurent says of the Paris attacks. “We had people that were described by witnesses as a ‘war machine’—reloading their magazines in a very methodic and calm manner. The end was also perfectly known for all of them—these were suicide bombers, not really the kind we saw with Charlie Hebdo and the Hyper Cacher.”

Though Laurent believes the poll conducted by ICM does need to be considered, he says it should also be taken with a grain of salt since the survey size was relatively small — only about 3,000 people were questioned.

“We have to take it very carefully — we can’t draw any definite conclusions from it,” he says. “But it shows also that France is becoming a place where we see a lot of conversion, a lot of native French converting to Islam, radicalizing, going to Syria, coming back and spreading the message. Also, we have to say, frankly, that the French Secret Service is totally out in the cold now.”

“They are totally not able to cope with threat and cope with the size of the threat,” he says.

When it comes to preventing further attacks, Laurent hopes that France can take a page from the United States and roll out more aggressive and well-funded counterterrorism operations, but he’s not hopeful.

“Unfortunately, I think we’re sliding towards a way in which nothing is done to prevent the emergence of radical Islam,” he says. “Most likely I do not see any improvement or solution in the short-term. And there is a high risk that France is heading to war, and obviously that will have consequences for the whole continent.”

Without action, Laurent believes that some French citizens may soon take matters into their own hands if they feel they are not being protected.

“Even the prime minister said today that we should expect some other operation — some other terrorist attacks in the near future,” he says “After what happened, and in the current situation, it’s a deaf dialogue between radical Islam and the rest of France. No measures have been taken, so there’s no way to appease both sides, therefore the situation is extremely bleak, to say the least.”

This story first aired as an interview on PRI's The Takeaway, a public radio program that invites you to be aprt of the American conversation.