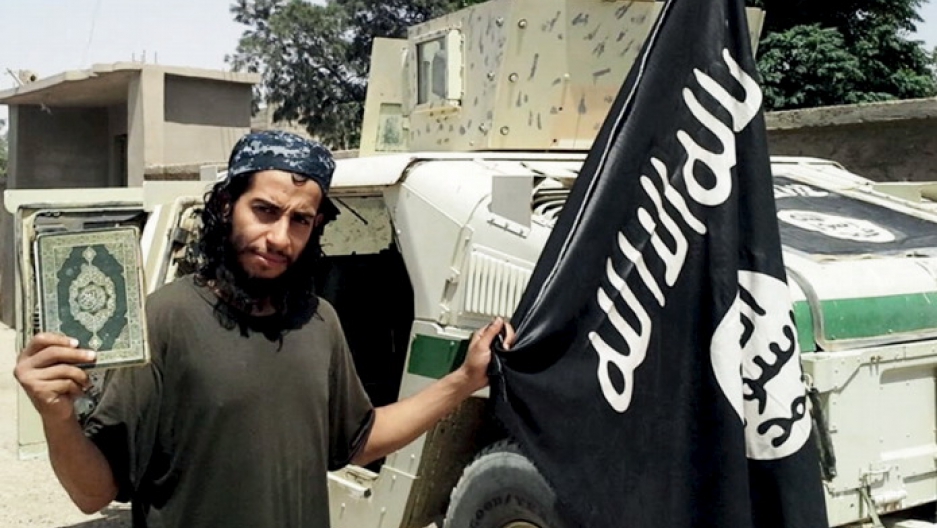 This undated photograph of a man described as Abdelhamid Abaaoud was published by the ISIS online magazine Dabiq and posted on a social media website. He is the Belgian national suspected of being the master planner behind Friday's deadly attacks in Paris.

French authorities are pointing the finger at ISIS. And they have named a 27-year-old Belgian man named Abdelhamid Abaaoud who fought with ISIS in Syria as the mastermind behind Friday’s deadly assault in Paris.

“France is at war,” President Francois Hollande told French lawmakers on Monday. The French president said that the attacks were, “planned in Syria, organized in Belgium, [and] perpetrated on our soil with French complicity.”

ISIS was born out of the chaos of Iraq and Syria. But do the Paris attacks mark a new strategy for the extremist group? We asked J.M. Berger about that. He’s the author of ISIS: The State of Terror.  Berger says there is a “vanishingly small” chance that the Paris attacks were not carried out by ISIS. The following is a transcript of the interview with Berger, lightly edited for clarity.

Q: If ISIS was indeed behind these attacks, does it represent a real game changer? Is ISIS trying something different?

Berger: We’ve seen ISIS carry out bombings abroad before, most notably in March in Yemen, where they bombed the Shia mosques in Sanaa. ISIS is really pursuing a strategy of escalating provocations. This is the latest in that series of provocations. While they had hostages [at times in the past], they didn’t need to leave their borders to provoke the West or countries in the region. But now, they’re moving toward more of a terrorism model. It’s not just Paris. In the last couple of weeks we’ve seen three major terrorist attacks attributed to ISIS in places outside of Iraq and Syria.

Q: ISIS has said for a long time that they’re not just interested in building a caliphate in the Middle East, but that they want everyone around the world to accept their beliefs, right?

Berger: Yes. These attacks are not necessarily designed to win hearts and minds. There is an element of that. ISIS is making a very deliberate play for the small percentage of people who are inclined towards violence, sort of violence junkies. It wants those people to be energized and to emulate what they see in a copycat manner. This is also more finely tuned to increase the involvement of foreign powers in the Syrian civil war. Iraq and Syria are a flashpoint for what’s happening. Without Iraq and Syria, we really wouldn’t have an ISIS. The more countries that get involved with more competing agendas, the more complicated this conflict becomes and the harder it is to resolve. I think this is a deliberate part of their strategy.

Q: It didn’t take long for France to start bombing Raqqa, the ISIS stronghold in northern Syria. But it sounds like you’re saying that’s what ISIS wanted.

Berger: I think that is part of the formula. If you go back to February, with the capture of the Jordanian pilot. ISIS took some pressure from Jordan, which agreed to join the coalition against it. They captured this [Jordanian] pilot who was carrying out an operation against ISIS. They burned him alive. And Jordan immediately massed forces on the border with Iraq. Then, ISIS began hitting them with suicide bombings, trying to lure them over the border. If Jordanian forces had made an incursion into Iraq, it would have created huge complications with the Iraqi government and would have really escalated tensions. I think that is really their game plan. They want as many players with competing agendas into the field [of Iraq and Syria] as possible. We can see how these competing agendas make it impossible, for instance, to resolve the Syrian civil war. We can’t get anyone to agree to what happens to [Syrian president, Bashar] Assad. And that is a huge asset for ISIS, because as long as we can’t agree on what to do about Assad, then we can’t really resolve the ISIS problem.

Q: What do you think are the big risks with the anti-ISIS coalition’s approach?

Berger: Right now, it’s very difficult to see how we’re going to progress past the loggerheads we’re at over Assad. The containment strategy may eventually cause ISIS to collapse. ISIS’s economy is really based on confiscation of goods and funds from the people who live in its territories. As long as it is held back from capturing new towns, there is only a limited amount of blood they can squeeze from that stone. So, it’s possible that we could see a tipping point and ISIS could collapse very quickly on its internal, economic strength, and its unpopularity. But we have no idea it would take for that to start happening.

Q: Some experts saw the attack in Paris as a long-shot, one-off by ISIS, meaning they would not be able to pull off another similar attack. What do you think? Was this an over-reach on the part of ISIS?

Berger: I don’t think so. There are two components to this and we saw it play out with al-Shabab [in Somalia] over the last year. Al-Shabab was a medium-sized insurgency. And when it was pushed out of its territories and lost a lot of its ability to govern space in Somalia, that freed up people who were in charge [things like] checkpoints and policing to be terrorists. So, we saw a huge increase in terrorism from al-Shabab after they lost their territory. ISIS is much bigger than al-Shabab. It has thousands and thousands of people, many more operatives and more money than al-Qaeda had on 9-11. ISIS certainly has the capacity to hit the West, to hit areas outside of its areas of control, probably repeatedly if it wants to. I think we need to be prepared for that prospect. We also need to be prepared for the prospect that if we do somehow put together a military coalition that goes in takes away the territory of ISIS, we’re essentially freeing up tens of thousands of fighters to become terrorists instead.

Q: It doesn’t sound like there are a lot of easy solutions here.

Berger: No. Usually people don’t come away from conversations with me with a smile on their face unfortunately.

Q: Today, ISIS released a video saying that Washington will also feel the pain, like Paris. What do you make of that?

Berger: We’ve long seen threats against Washington. ISIS really has a high tempo of verbal threats that it issues over social media and its video propaganda. It’s not necessarily indicative of the fact that they have the capacity to strike in Washington. I would say that hitting in the United States with an attack similar to the one we saw in Paris would be much more difficult for them. But I don’t think it’s outside of the realm of possibility.