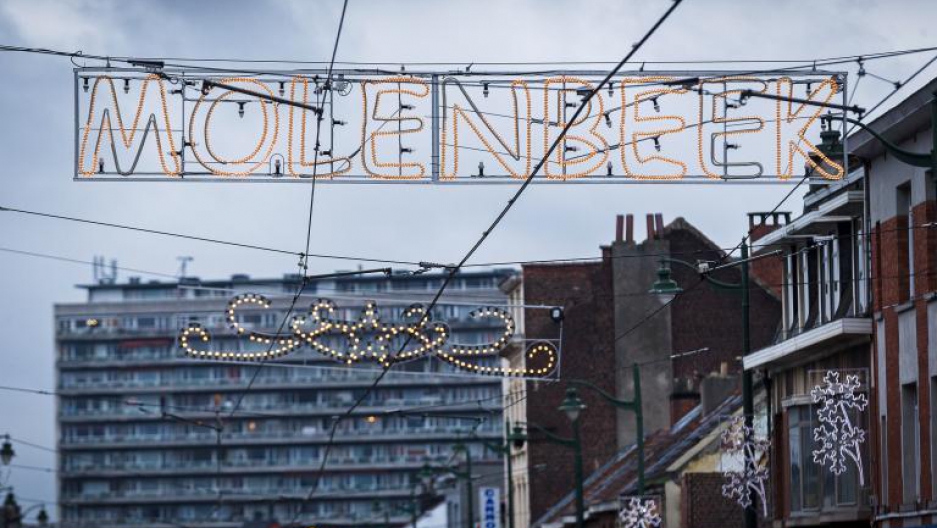 This Nov. 16, 2015 photo shows Christmas lights in the municipality of Sint-Jans-Molenbeek (also known as Molenbeek-Saint-Jean, or just Molenbeek) in Brussels. Multiple people were arrested there during weekend searches to find suspects in the Nov. 13 terror attacks in Paris.
Credit: JAMES ARTHUR GEKIERE
Share

LISBON, Portugal — The Brussels neighborhood of Molenbeek is in the world spotlight like never before, as police move in looking for suspects linked to Friday's murderous attacks in Paris.

The gritty inner-city district with a majority Muslim population is being portrayed as a jihadist breeding ground, a no-go area for the police where extremists have been free to plot terror.

Besides the suspected links to Paris, a would-be gunman wrestled to the ground by American tourists on a high-speed train to Paris in August got his AK-47 from Molenbeek, prosecutors say.

The Frenchman of Algerian origin who killed four people at Brussels' Jewish Museum was living there, as were two terror suspects shot dead by Belgian police in January.

"Almost every time, there is a link to Molenbeek," Belgian Prime Minister Charles Michel said over the weekend.

Belgian authorities, who have long been criticized for a lax approach to radicals in the neighborhood, vowed to crack down. Justice Minister Jan Jambon pledged he'd oversee an operation to "cleanse" the area. Security forces conduct operations in the Molenbeek district of Brussels on Nov. 16, 2015.

But Molenbeek's problems are not new. As Brussels correspondent for GlobalPost, I reported from the district in 2012, when Belgium's then-foreign minister jokingly compared the area to Afghanistan and far-right websites were already calling it "Mullahbeek."

Molenbeek made headlines that summer when violence broke out following an attempt by police to check the identity of a woman wearing a niqab, which has been illegal in Belgium since 2010. She resisted, and in a scuffle a policewoman suffered a broken nose.

In the neighborhood rumors spread that the woman had been stripped and manhandled by male officers. That night several dozen youths clashed with police.

Days later another policewoman and a male colleague were stabbed in a Molenbeek subway station by a suspected extremist who traveled from France to "avenge the honor" of the veiled woman.

More from GlobalPost: Brussels against the world

The incidents sparked outrage among Belgian politicians. There were calls for Islamist extremists to be deprived of their Belgian nationality and deported.

Community leaders pointed out that the niqab-clad woman at the center of the incident was a native "Belgo-Belgian," without roots abroad, while the two injured policewomen were Muslims of Moroccan origin.

Since then the area's problems have worsened. Wars in Syria and elsewhere in the Middle East have fueled radicalization among disaffected youth.

A country of 10 million, Belgium is believed to have produced an outsized number of foreign fighters for the ranks of IS and other radical groups in Syria. It's estimated more than 350 Belgian nationals may have joined the conflict.

Over half of Molenbeek's population of about 95,000 is Muslim, mostly Moroccan immigrants and their descendents. The area shares many of the problems of high crime, rampant youth unemployment and overcrowded housing common to poor immigrant neighborhoods around Europe.

Unemployment among people under 35 is above 30 percent.

"My dad was a steel worker, and when our parents' generation came over here they focused on their work and the education of their children," Noureddine Imnadine, a Moroccan-born architect, told me in 2012.

"Many of us studied hard and did well, became architects, engineers, entrepreneurs, but nobody talks about that," he told me in his office in the neighborhood where he grew up. "Now times are different, there's not so much work around for this younger generation, so you have these kids hanging around on the streets, feeling excluded, stigmatized, angry. We need a social framework for these kids, to get them engaged in work or in some activities to get them off the street."

The tightly packed row-house streets at the heart of Molenbeek's old industrial neighborhoods are just a short walk from the boutiques and chic cafes of downtown Brussels, but few well-heeled shoppers venture over the narrow canal that separates the district from the city center.

On the bright summer day when I visited, Molenbeek didn't appear so scary. Cafe terraces were filled with men gossiping over glasses of mint tea. Matrons in bright "djellaba" robes shopped for pastries scented with saffron and orange blossom, while newer immigrants from Poland or central Africa mingled in the line for groceries at the Dial Soussi Moroccan supermarket.

"When Belgo-Belgians from outside do see the real Molenbeek, they are often astonished to discover that it's not like they've been told," local businessman Moutapha Beggar told me. People take part in a "multi-colored" march for peace and ''living together,'' organized by the residents of Molenbeek, on June 24, 2012.

After riots in the early 1990s the local officials in Molenbeek and Brussels city authorities launched efforts to improve integration. Services to fight "social exclusion" were set up, including a House of Cultures that sought to engage all sections of society in the arts. Funding was provided for a prestigious soccer academy for local youngsters.

Then gentrification began in parts of Molenbeek. Warehouses and factories were converted into fancy apartments, artists' studios and office space to attract new residents and business into the area.

Yet staff at companies who moved in complained of robberies and vandalism. Women in particular accused Molenbeek city hall of minimizing street crime and harassment.

"Youngsters have snatched our handbags, they have broken the windows of our cars, they have insulted us verbally to the extent that we're scared to our stomachs to go into the street," employees of the BBDO advertising agency wrote to the then-mayor.

The right fueled alienation by blaming the whole community for crime and social problems, he said, while the left turned a blind eye to intolerance from religious conservatives because of political correctness or fear of losing votes. Moderate Muslims were caught in the middle.

"There's a sort of cultural relativism, there are some parties that are prepared to accept the unacceptable on women's rights and other issues. They argue it's a cultural thing, instead of upholding universal rights," Benabid told me back in 2012. "That has to change."

Three years on, the politicians may finally heed his words.