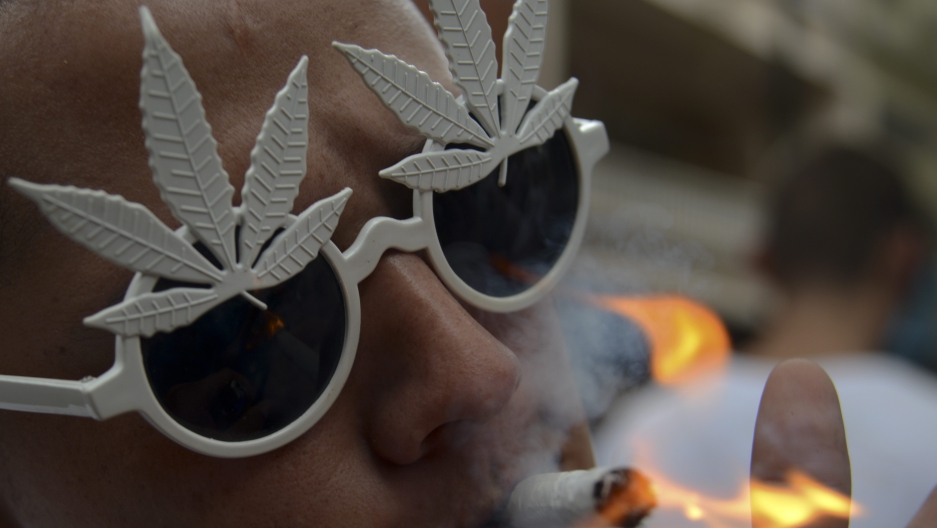 A man smokes marijuana during a protest for its legalization in Medellin, Colombia on May 2, 2015.
Share

He said he will sign the new measure into law this week, marking a bold departure both for his center right administration and for Colombia, a staunch longtime ally of Washington in the war on drugs.

“It has already been scientifically proven that marijuana has many medicinal attributes,” Santos told the BBC.

“There is no problem in legalizing and using marijuana for medicinal uses. It’s not the same for other drugs because there is no scientific proof that cocaine or heroin are good for … some kind of medicine.”

Colombia continues to outlaw the recreational use of all drugs although the law does tolerate the possession of small amounts of drugs for personal consumption.

The move is particularly significant given Colombia’s status as the source of most of the cocaine in the US market. Despite Santos’ insistence on drawing a line between cocaine and cannabis — especially when the latter is used clinically rather than recreationally — some are seeing a connection with his past calls for a debate about decriminalizing harder drugs.

Santos’ reasoning is that the cost of the drug war in lives, money and law enforcement resources has been too high. He also believes that legalization would undercut the ruthless criminal cartels’ business model.

That view has also been strengthened by the Santos administration’s recent decision to stop killing coca crops, the key ingredient in cocaine, by spraying them from the air with glyphosate, a herbicide that has long been suspected of causing health problems among local communities.

Hannah Hetzer, a Latin America specialist at the Drug Policy Alliance, a US group campaigning for narcotics reform, welcomed Colombia’s decision, emphasizing how it came hot on the heels of the Mexican high court’s decision to permit recreational pot smoking.

“Latin American countries have long been raising their voices globally against the negative effects of prohibition but what this shows, along with last week’s decision in Mexico, is that they are now really ready to step up and take action,” Hetzer told GlobalPost.

“Medical marijuana and cocaine are distinct. But this rolling back of some of the punitive policies does seek to undo some of the damage caused by the drug war, just like Santos’ decision to stop using glyphosate.”

More from GlobalPost: Meet the Peruvian Rasta behind a landmark case for the right to grow weed

But not everyone in Colombia is pleased. The strongest voice against the decree came from Attorney General Alejandro Ordoñez, who warned that it was part of a national trend in counter-narcotics policy “that weakens the fight against drugs and threatens citizens.”

And there was also some criticism from a more surprising quarter, Senator Juan Manuel Galan, a long-time campaigner for drug law reform in Colombia, whose father was assassinated as he ran for president in the 1980s on orders from druglord Pablo Escobar.

Galan, who has been working on his own bill to legalize medical marijuana, warned the decree was “improvised” and left loopholes that failed to offer legal certainty to patients and would allow transnational corporation to squeeze small local producers out of the market.

If Santos does sign the decree, Colombia will join several other Latin American nations where medical marijuana is already legal. Chile harvested its first ever crop earlier this year. And Uruguay has fully legalized cannabis, including for recreational purposes, with the state not just regulating but even growing the plant.