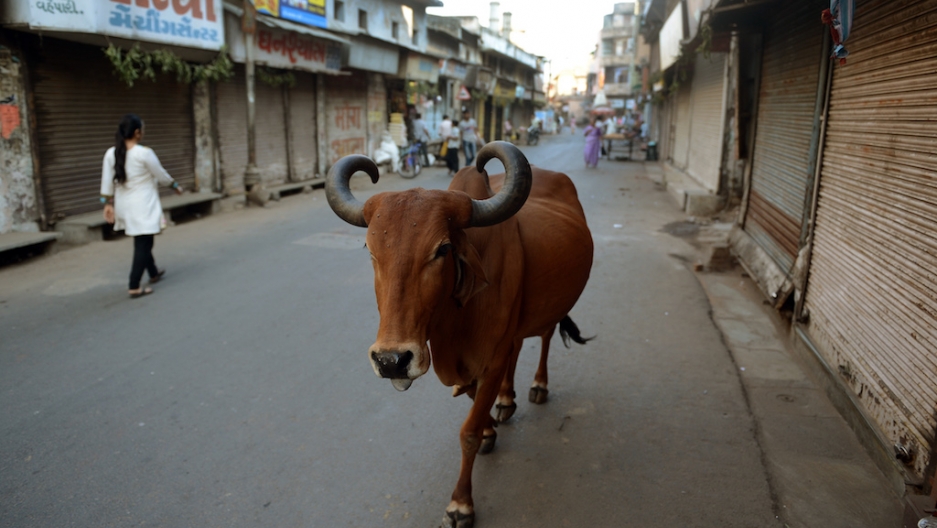 NEW DELHI, India — Animals hold a lot of social and political significance in India. Hindus consider the cow sacred, Muslims find the pig impure, and Parsis are put on towers of silence after death to be eaten by vultures.

For most Indians, though, these creatures aren’t just religious symbols — they’re neighbors. The country’s biggest cities are filled with urban wildlife, most noticeably the millions of stray cows and dogs living on India’s streets.

In New Delhi, for example, it’s not unusual to find a cow loitering, unperturbed, in the middle of the road. Unafraid of traffic, they often cause logjams or accidents, as speeding vehicles stop dead or swerve to avoid hitting the holy creatures. Commuters, however frustrated by the delay, can do nothing but try to convince the cow to move along, because hurting one in any way would enrage Hindus.

Stray dogs and puppies are not treated as gently. Many Indians love, feed and care for the street dogs in their neighborhoods, but others consider them an annoyance — even a danger. Some dogs get aggressive, and in a country where rabies is endemic, a bite can prove fatal.

What to do about stray dogs is now a matter for India’s Supreme Court. On Nov. 18, judges will decide whether local governments have the authority to kill street dogs that are a “nuisance” to people.

Their ruling could affect hundreds of thousands of strays in states like Kerala, where authorities face a dilemma over how to control a vast canine population. The state is estimated to have more than 200,000 stray dogs on its streets and residents have long demanded action to reduce their numbers, with some vigilantes even taking matters into their own hands.

Any proposal to cull dogs has met with fierce opposition from animal rights activists all over India, however, who this summer called on foreign travelers to boycott Kerala — which depends heavily on tourism — over alleged animal cruelty. The Animal Welfare Board of India, which advises the government on animal policy, filed a petition in July with the Supreme Court in a bid to block indiscriminate culling.

Instead, the board invokes rules established in 2001 that require local authorities to vaccinate and sterilize street dogs, while allowing them to euthanize only dogs that are fatally ill or injured.

“[These rules] are not being followed, in most places,” S. Chinny Krishna, vice chairman of the Animal Welfare Board, told GlobalPost. “We have the finest animal welfare laws in the world, bar none, but implementation is virtually zero.”

If the Supreme Court rules against culling next week, Krishna hopes that it will convince states to invest in sterilization and vaccination programs, which he says are a more humane, safer and more effective way to control the population of stray dogs and prevent the spread of rabies.

Homeless people and animals warm themselves around a fire in Allahabad, January 23, 2013.

If the treatment of street dogs is hotly debated, India’s street cows are largely ignored. They, too, can be a nuisance and a danger to city dwellers, and the animals themselves risk being hit by speeding vehicles or grazing on poisonous waste. And yet no policy exists to govern their care, control or removal.

“As far as stray cows are concerned, [the rules] vary from state to state and from local body to local body,” said Krishna. “There are no nationwide rules.”

The Delhi High Court ordered all stray cattle to be removed from the streets of the capital in 2002, but the animals can frequently be seen chewing wayside trash here and in other cities.

Where do they come from? According to PETA India, bulls, male calves and cows that have “dried out” are often turned out of dairy farms because they do not produce milk. Some farmers sell such cattle to slaughterhouses, but many others are discouraged by religious objections and the rise of militant Hindu “cow protection” groups, who have taken to attacking trucks that transport cattle and beating up farmers who they suspect of sending cows to their death. Abandoning cows is often considered the safer option.

According to Nikunj Sharma, one of PETA India’s campaign strategists, even cows that aren’t abandoned often find themselves on the streets — illegal dairies cut costs by allowing the cows to feed themselves off waste lying in the road.

Some attempts have been made at a local level to regulate illegal dairies and mandate proper care of cattle. City authorities are usually directed to impound street cows, release them to owners for a fee, and auction or rehome unclaimed animals. Some local governments have their own cowsheds, where confiscated or ownerless cattle are taken to live out their days.

Yet these “retirement” sheds are not necessarily a happy ending either. Twenty years ago, the Delhi government created 10 such shelters. By last year, only five survived, amid complaints of a lack of funding or oversight. Out of 49,000 cows kept in these shelters, authorities reported in 2011, 46,000 died in three years.

Many of the animals are severely malnourished by the time they reach a new home, caretakers say. Trash, plastic, shoes and even metal is found in their stomachs.

In a country where eating beef can get you killed, cows seem to get a lot more of India’s attention when they’re dead than they do when they’re alive.