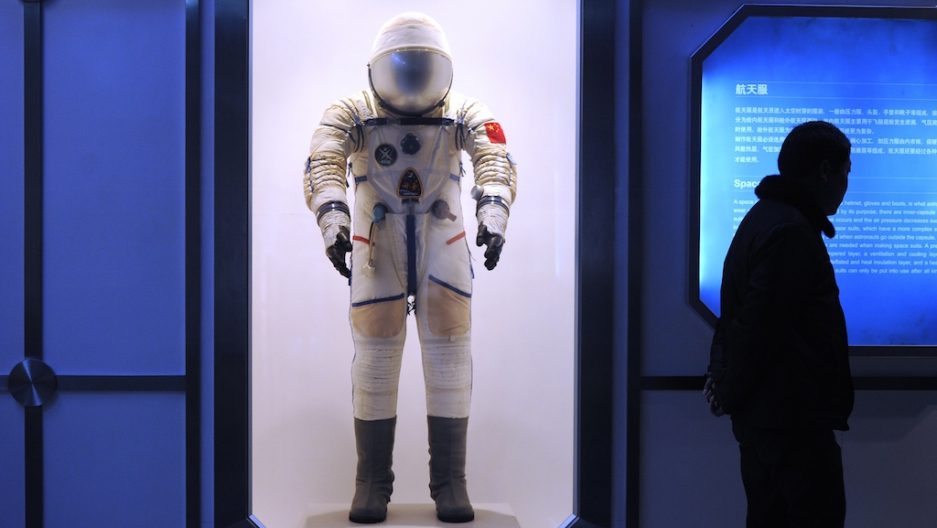 Two of the biggest space movies of recent years, "Gravity" and "The Martian," imagine American astronauts turning to China for help. That scenario, once far-fetched, is increasingly likely these days as China rapidly becomes a leader in space exploration.

Most of the world welcomes it. The United States does not.

Crossing frontiers isn’t entirely new for China. What media popularly call its “rise” is really a return — for most of human history, China’s was the greatest civilization on Earth. China was also the world’s most intrepid explorer. Fixing his eyes on the stars and braving the seas in the longest wooden ships ever built, the Chinese admiral Zheng He may have beaten Columbus to North America, and circumnavigated the globe before Magellan.

Then China went dark for almost 600 years. But today it’s probing the limits of the known world once more, fixed on the very same stars — now with the hopes of visiting them.

China is building the world's largest radio telescope, which will outmeasure the American-run, 1,000-foot-wide Arecibo Observatory in Puerto Rico by more than 600 feet. It also has plans for the world's biggest solar telescope, nearly twice the size of the giant one that the US is currently constructing in Hawaii. This month China unveiled its Mars probe; its space lab will launch next year; and officials hope to place their first manned space station in orbit around 2022.

More from GlobalPost: Why a little country like Paraguay is launching a space program

The US, however, is torn on the issue. While September saw the inaugural China-US Civil Space Dialogue between US State Department and China National Space Administration officials in Beijing, NASA and the White House Office of Science and Technology Policy (OSTP) are banned from using federal funds to collaborate with the country or any Chinese companies in any way. NASA cannot even allow Chinese officials to set foot on agency property.

But the ban won’t last, NASA chief Charles Bolden said last month, “because everybody ... who has any hope of a human spaceflight program ... will go to whoever will fly their people.”

That could soon be China, which has already shown impressive progress by launching its first satellite, carrying the first taikonaut (Chinese astronaut) into space, orbiting the moon, managing its first space walk, mastering orbital docking and landing its first lunar rover.

While a source of national pride, China’s space program bears none of the apocalyptic hostility that characterized the 20th-century Space Race. In fact, when Yang Liwei became the first taikonaut to enter space in October 2003, he celebrated with a show of international solidarity, displaying the Chinese and UN flags side by side.

China has since collaborated with Brazil, Germany, France, Italy, Russia, Sweden, the European Space Agency — but, conspicuously, not the US. What explains the United States’ singular stance?

“It’s really important that we keep the Red Chinese out of our space program.”

“The answer,” writes Joan Johnson-Freese, professor of national security affairs at the US Naval War College, “might well be realism versus political theater.”

Taking a stand against Chinese human rights abuses, it was former Republican Representative Frank Wolf of Virginia — who once compared China to Nazi Germany — who inserted the 2011 federal budget clause banning NASA and the OSTP from bilateral cooperation with China.

As a result, Chinese scientists cannot board the International Space Station (ISS), and in 2013 Chinese participants were banned from attending a conference on NASA’s space telescope program because it took place at one of the agency’s facilities (the ban was eventually reversed after Wolf called it a misunderstanding of the law). Johnson-Freese notes: “There was a joke that if a NASA employee was on a DC Metro car with an Asian, he or she better switch cars.”

And things may only get worse. Wolf retired as chair of the House subcommittee that funds NASA this year but was replaced by Republican Representative John Culbertson of Texas, who has said he will continue to “keep the Red Chinese out of our space program.”

One argument for doing so is to hold China accountable for its record on human rights — although defending the freedoms of Chinese artists and journalists by throwing roadblocks in the way of Chinese scientists hardly seems like progress. There’s also nothing to suggest that position will have any impact on Beijing’s policies, especially when the US is alone in shunning China’s space program.

More from GlobalPost: How Russia could strangle the US space program

The other reason is that some US intelligence officials worry a technological exchange with China could lead to weaponization.

These fears were partly vindicated when, in January 2007, China used one of its own weather satellites as target practice, obliterating it with a ballistic missile and creating the largest cloud of space debris in human history. The ISS crew subsequently had to take refuge in escape capsules.

Chinese foreign ministry spokesperson Liu Jianchao dismissed concerns at the time. “There’s no need to feel threatened about this,” he said. “We are not going to get into any arms race in space.”

Yet the US-China Economic and Security Review Commission, in a report due to be published this month, states that China is developing what it calls “a broad and robust array” of space weapons, including missiles that can take out satellites.

“The common enemy is complexity and cost.”

According to Baoying Heixi, professor of aerospace engineering at Tsinghua University, these are exaggerations.

“China is a developing country,” he told GlobalPost. “Its industry and technology base is still very weak. Passing [the] US space program needs many hundred years — or never.”

Still, China’s progress — without US help — has been mighty. There seems little reason to fear the Chinese stealing US technology when they’re getting by so well without it.

The potential value of collaboration is in fact the same thing its critics cite: the protection of resources.

“The long-term goals are the same from country to country,” the former commander of the ISS, Chris Hadfield, said during a trip to China last year. “The combined objective is trying to understand the rest of the universe. The common enemy is complexity and cost.”

David Volodzko is based in Chengdu, China, where he writes for The Diplomat and is the author of the blog Rational Consent.