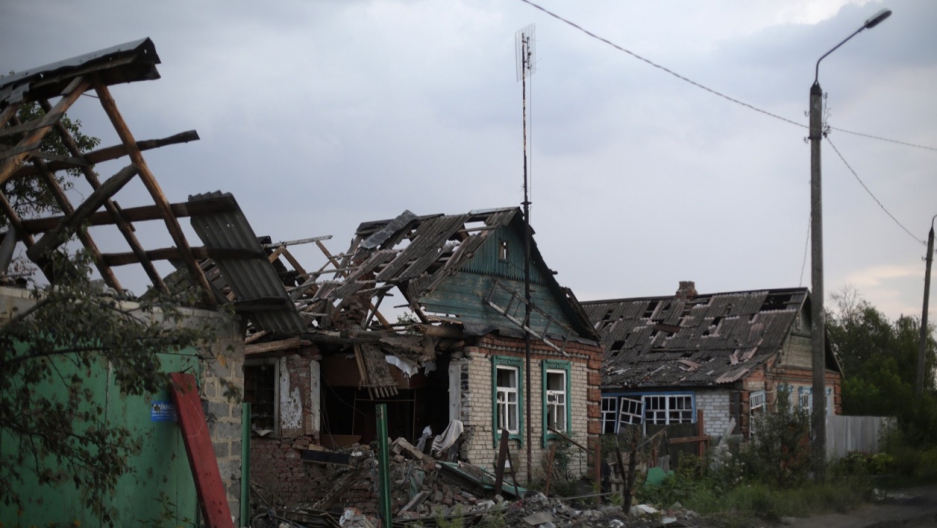 Houses destroyed by combat between the Ukrainian armed forces and pro-Russian militants in the village of Semenivka, near the eastern Ukrainian city of Slavyansk.
Credit: Anatoli Stepanov
Share

SEMENIVKA, Ukraine — The sound of a soldering iron crackles as Raisa Onishchenko hobbles near the empty foundation of her home in eastern Ukraine.

Artillery fire during the war between Ukraine's government troops and pro-Russia rebels destroyed her modest house just outside the city of Slovyansk. Now it's finally being rebuilt. But it took a year and a half before anyone did anything about it, she says.

“They’re just starting this now,” Onishchenko, 79, says through tears, “but this house could have been rebuilt long ago.”

The war ended for Slovyansk and nearby areas when Ukrainian forces liberated them from the separatists in July 2014, but its damaging effects still linger. Most visible are the bombed-out houses like Onishchenko’s that still stand virtually untouched.

Local residents are grappling with the fact that scores of destroyed homes still haven't been rebuilt, which they blame on the government.

It's difficult to pinpoint exactly why it's taken so long. Ukraine's tanking economy and an expensive war with Moscow-backed rebels, that only recently cooled down, definitely haven’t helped.

If it wasn’t for the Luxembourg Red Cross, which is spearheading the reconstruction effort on Onishchenko’s house, she might have had to spend her final years in the stand-alone brick kitchen on her small plot of land. A construction worker helps rebuild Raisa Onishchenko’s home in the village of Semenivka.

Another Semenivka resident, 50-year-old Viktor Kodinets, remembers how he and his family spent two days in their cellar in June 2014, waiting for the shelling to ease up.

Luckily, the artillery barrage left them unscathed. But it reduced their brick house to mostly rubble.

Kodinets says the former regional governor visited the area in the past year pledging funds for reconstruction, but that not much was done. He adds that he’s been promised around $500 in compensation by officials.

“What kind of help is that?” Kodinets asks.

Foreign organizations have stepped in to help the local authorities, who connect them with residents most in need. The Luxembourg Red Cross, for instance, is currently rebuilding 10 houses in three different areas, according to Tommaso Merlo, the group's Ukraine Mission chief. They expect to put up between 20 and 30 next year.

Just one house costs about $13,200 to rebuild, Merlo says. Those who don't qualify for assistance have been forced to rebuild their homes at their own expense. The remains of Viktor Kodinets’ house, which has not yet been rebuilt, can be seen in the background.

Luckily, though, no one in Semenivka — where village leader Vera Kostyreva estimates around 50 houses were totally damaged — was left homeless. Most former residents have gone to stay with family or friends in nearby Ukrainian cities, or in Russia.

“A big thanks to all the people who help us,” she said, “but the authorities have offended us.”

Meanwhile, the situation closer to the front lines — which saw more prolonged and intense fighting — is dire. Local residents there reportedly face shortages of food and medicine in addition to a lack of proper housing.

In total, more than 2 million people have been displaced by the fighting since April 2014.

Here in the Slovyansk area, the slow pace of reconstruction has also contributed to growing local anger at the central government in Kyiv. Local elections here last month saw a surge in support for a controversial opposition party that’s associated with the old guard under ousted President Viktor Yanukovych.

Vadim Lyakh, the newly elected mayor of Slovyansk from that party, claims his city has attempted to compensate victims to whatever degree it can.

But he blames Kyiv for not providing enough cash for meaningful reconstruction.

“The process is being delayed very significantly,” Lyakh told GlobalPost, “and it should’ve been taken care of already.”