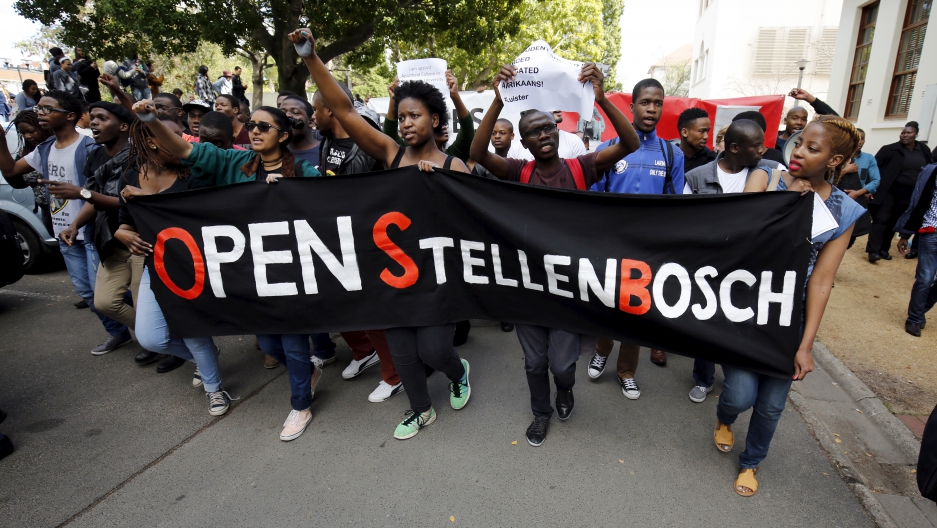 Students march with a banner during a protest at South Africa's Stellenbosch University in this picture taken September 1, 2015.

Activists at Stellenbosch University in South Africa are celebrating a big win. After months of protests the university administration has decided to drop Afrikaans as a language of instruction and switch to English.

"We are definitely breaking down huge barriers with this move," says student Simone Cupido, spokesperson for the Open Stellenbosch group that led the fight.

"At Stellenbosch University we intend using language in a way that is oriented towards engagement with knowledge in a diverse society and to ensure equitable access to learning and teaching opportunities for all students," a university statement read.

"Since English is the common language in South Africa, all learning at Stellenbosch University will be facilitated in English, and substantial academic support will be provided in other South African languages, according to students' needs. At the same time, by means of its Language Policy and Language Plan, the University is committed to the creation of spaces within which English, Afrikaans, isiXhosa and other languages can flourish. In particular, the University remains committed to the further development of Afrikaans and isiXhosa as academic languages."

It's a big symbolic victory for activists as Stellenbosch was once the intellectual home of apartheid ideology.

During the apartheid era it was completely white and Afrikaans but it is now about 40 percent black.

Protesters complained black students faced language discrimination since Afrikaans is a third language for them at best.

In contrast, everyone in South Africa learns English from the second grade.

"Black students were dropping out because they couldn't understand it," says Cupido. "Afrikaans is a strong characteristic of apartheid and apartheid ideology so for us it is echoing of apartheid sentiment."

She says "it was a long year of protest and fighting in every forum."

A documentary called "Luister" (the Afrikaans word for "listen") crystallized the issue and galvanized the movement when it came out in June.

It portrays black students talking about the racism they experience at Stellenbosch and the difficulties they have understanding Afrikaans.

"The release of the documentary opened a conversation about language being exclusionary," says Cupido. "Before that it was hard to explain."

The language issue is just one piece of a larger struggle by activists at South African universities to "decolonize" their campuses.

The students on campus today were born as apartheid was ending. Cupido says they were promised education and equal rights.

Instead they are inheriting a country still plagued by deep inequities. They feel a kinship with the protesters at the University of Missouri.

Cupido says she's watching the situation in the US with "bated breath."

"I think the black body should be accepted in our educational institutions in all ways and I think that is something admirable to fight for ... to make a space for equal education for all."