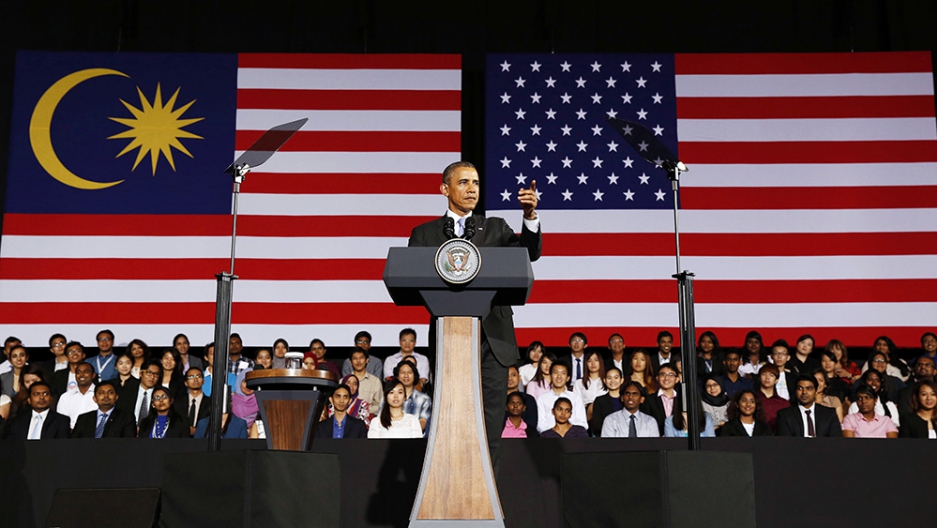 US President Barack Obama pauses after being introduced at the Young Southeast Asian Leaders Initiative Town Hall at University of Malaya in Kuala Lumpur April 27, 2014.

“Selamat Datang, Mr. President!” As a Malaysian, I would like to welcome President Barack Obama, who is making his second visit to Malaysia in less than seven months. While there, he should notice a few key facts about how the country treats women.

In April, President Obama became the first US president to visit Malaysia in nearly 50 years. On that visit, Obama called for equal opportunities for Malaysia’s non-Muslim minority. This time, his top priority is the Trans-Pacific Partnership, a massive free trade deal with Malaysia and 11 other countries across the region.

As part of PRI's Across Women's Lives coverage, we want to help brief Obama on the status of women in Malaysia. And you can join the effort on social media by using the hashtag, #WhatObamaShouldKnow.

Malaysia was ranked 107th out of 142 countries in the World Economic Forum's Global Gender Gap Report 2014 — one of the two worst performing countries in Southeast Asia, along with Cambodia. (East Timor and Myanmar were not ranked.)

A closer look at this annual index published by the World Economic Forum to measure gender equality shows that Malaysia was given some of the lowest scores in terms of women's political empowerment. The chart below shows the details.

The weak position of Malaysian women in the public space is confirmed by another international gender index. The Social Institutions & Gender Index 2014 published by the OECD Development Center ranked Malaysia as the country with the highest "restricted civil liberties" in Southeast Asia. The ranking includes negative attitudes toward women as public figures or as leaders.

The same index found that Malaysia has the second highest "discriminatory family code" in the region after Indonesia. "Discriminatory family code" refers to social institutions that limit women’s decision-making power and undervalue their status in the household. This is especially true for Muslim women, who are deprived of certain rights under Sharia laws. For example, Muslim men are allowed to marry up to four women and are granted an automatic right to divorce, while women need the approval of a judge if they want a divorce.

Malaysia practices a unique dual justice system that allows the Sharia laws to run in parallel with secular laws. The Islamic laws only apply to Muslims, who make up approximately 61 percent of the population. The growth of conservative Islam since the 1970s has led to a narrower interpretation of Islamic laws and teachings.

The discrimination against Muslim women was epitomized by a recent debate over the definition of marital rape following a rape awareness campaign launched in April with the tagline "Rape is rape. No excuse."

Islamic conservatives, including a state-appointed mufti, challenged the campaign, arguing that men can always have sex with their spouses even without their consent.

“Even the Prophet says even when they’re riding on the back of the camel, when the husband asks her, she must give ... So there’s no such thing as rape in marriage. This is made by European people, why should we follow?” Harussani Zakaria, mufti of the Malaysian state of Perak, told a local newspaper.

The muftis in Malaysia are given power to issue Fatwa, which are legally binding for every Muslim.

Two months later, this view on marital rape was backed by the government when the law minister Nancy Shukri, one of the three female ministers in the cabinet, told the parliament that marital rape is not a crime and there is no plan to amend the law.

Islamic laws and religious norms also hold Malaysia back from fully complying with the United Nations Convention on the Elimination of All Forms of Discrimination Against Women. The country has made several exceptions with regard to women's equality in marriage and family relations.

The discrimination does not stop at Muslim women. Muslim men who want to be women are also facing growing persecution by the religious authority.

In June of this year, religious officials raided a wedding party held in a private home and arrested 17 transgender women invited as guests, including a minor. One was reportedly beaten, choked and kicked by the officials during the arrest. A Sharia court later fined and jailed the 16 adults for seven days. They were put in the male prison and had their heads shaved.

The offense? Men posing as women, which is a crime under a state Sharia law.

According to Human Right Watch, while some states in Malaysia also criminalize women posing as men, all arrests to date under these laws have targeted transgender women.

In a report released last year, the international human rights watchdog pointed out that transgender people in Malaysia are fired from their jobs, evicted from their homes, physically and sexually assaulted, and denied access to health care because of their gender identities.

“When public officials or private individuals commit violence against transgender people, the victims face serious obstacles — and at times further sexual abuse — from the police who are supposed to be helping them,” said the report.

Transgender rights suffered a blow last month when the Malaysian federal court, the highest court in the country, overturned the judgments of two lower courts and reinstated a state law that criminalizes cross-dressing of males as females.

Rights group Justice for Sisters found that the court's decision has triggered a wave of raids and arrests against the transgender community in several states.

Malaysia was identified by the US State Department and the United Nations as both a destination as well as a transit country for women and children subjected to sex trafficking.

In her preliminary report published in March this year after a visit to Malaysia, Maria Grazia Giammarinaro, UN Special Rapporteur on trafficking in persons, stated that trafficking of young foreign women and children, particularly from neighboring countries, for the purpose of sexual exploitation is prevalent in the country.

“These young women and children mostly end up into the commercial sex trade following deceptive recruitment practices for legal work in Malaysia.

“There is also information about women and girls from South Asia entering into brokered marriages with older men in Malaysia and subsequently being forced into domestic servitude and forced prostitution,” her report states.

Human trafficking in Malaysia attracted international attention in May when several mass graves of suspected trafficking victims were found along Malaysia’s border with Thailand, and again in July, when the US upgraded Malaysia from tier three, the worst ranking in its 2015 Trafficking in Persons report, to tier two.

The upgrade was criticized by anti-trafficking groups and activists as a political decision to facilitate Malaysia’s participation in the Trans-Pacific Partnership, as US legislation bars Obama to fast-track trade negotiation with countries in tier three.

A Reuters report published in August revealed that human rights experts at the State Department concluded that Malaysia should remain in tier three as the trafficking conditions in the country hadn’t improved. However they were overruled by senior American diplomats and pressured to inflate the assessment of Malaysia.

Several US lawmakers have since called for an internal probe into the controversial ranking.

On top of all this, Malaysian prime minister Najib Razak, who recently claimed he is the only prime minister in the world to be able to play golf with Obama, has been implicated in a financial scandal. 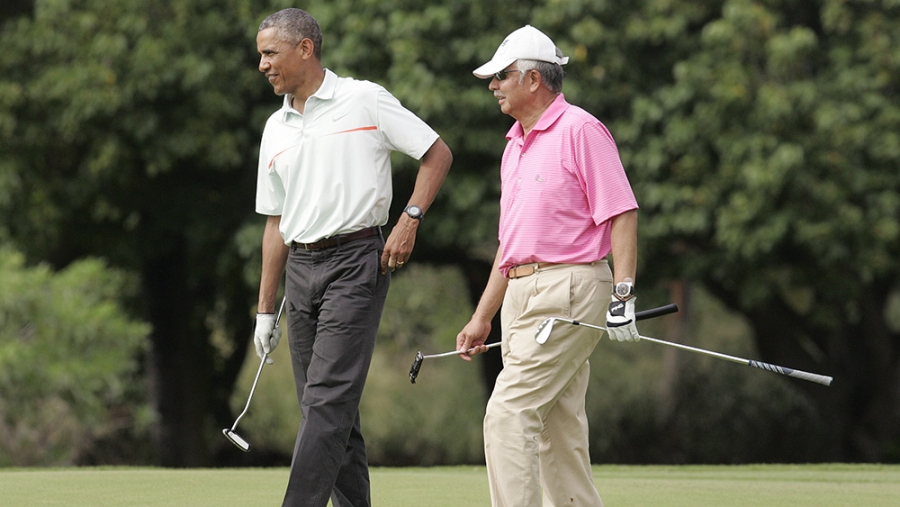 US President Barack Obama and Malaysia's Prime Minister Najib Razak walk off the 18th hole while playing a round of golf at the Clipper Golf course on Marine Corps Base Hawaii during Obama's Christmas holiday vacation in Kaneohe, Hawaii, December 24, 2014.

Razak’s opponents say he’s capitalizing on his cozy relationship with Obama while his support within the country wavers. That may provide even more reason for Obama to raise questions about the status of women during his visit to Malaysia.