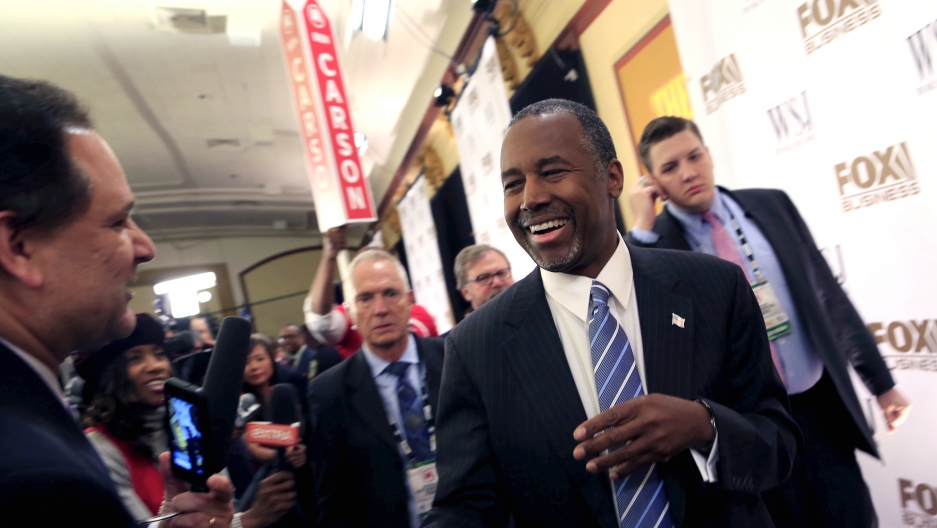 Ben Carson takes questions from the media in the spin room after the debate held by Fox Business Network for the top 2016 U.S. Republican candidates in Milwaukee, Wisconsin on November 10, 2015.

Russia is a threat. Gitmo should stay open. America must always stand with Israel.

All three of them.

At this point in the 2016 campaign, it’s hardly a surprise that an outsider candidate’s positions on international affairs are still a work in progress. But Carson’s views are already setting off some alarm bells.

During this week’s debate, Carson was reminded that he did not support the US-led invasion of Iraq in 2003, nor did he agree with the decision to send a large American force into Afghanistan. Still, Carson said he wants to see a more robust US military campaign against ISIS in Syria and Iraq.

"You have to continue to face them, because our goal is not to contain them, but to destroy them before they destroy us," Carson said. He also mentioned that “the Chinese are there” in Syria.

As outlandish as that notion sounds, one of Carson’s advisers, Armstrong Williams, told MSNBC on Thursday that the statement was no gaffe.

"From your perspective and what most people know, maybe that is inaccurate," Williams told MSNBC. "From our own intelligence and what Dr. Carson's been told by people who are on the ground who are involved in that region of the world, it has been told to him may times over and over, that the Chinese are there."

Armstrong went on to say that a news story might emerge in the coming days that would back up the candidate’s comments about Chinese intervention in Syria. (In 2005, Armstrong received withering criticism after revelations that he promoted the Bush administration's "No Child Left Behind" policy on various outlets without disclosing he had been paid $240,000 by the Bush administion to do so.)

Carson’s go-to adviser on matters of foreign policy and national security is retired US Army Maj. Gen. Robert Dees, who met Carson at church early this year. "In a short time I came to recognize Dr. Carson had the right reflexes, and after 30-plus years in the military, I can size up a leader," Dees told CNN.

But some of the views expressed by Dees should be cause for real concern, argues James Bamford, the author of The Shadow Factory: The Ultra-Secret NSA from 9/11 to the Eavesdropping on America.

Bamford says Dees, “has indulged in anti-Muslim bigotry and advocated for a national security strategy centered on Christian evangelism.”

In a video shot last September at a conference for conservative political activists, Dees talked about the security situation in the Middle East.

Bamford says this sentiment appears to square with Carson’s past comments about Muslims being unfit to ever be US president. “[Carson] may have walked it back a bit, but I think that pretty much stands out as his view,” Bamford says.

Dees, who holds a position at Liberty University, has spent recent years working with evangelical Christian groups to convert members of the US military to Christian evangelism, Bamford says.

Their goal is to spread a Christian religious message to active duty military personnel, Bamford says, “and then use the military, in his words, to ‘indoctrinate’ the American public.”

Beyond that, Dees expressed his efforts to spread the evangelical message abroad in a 2007 Youtube video.

As a candidate, Carson has yet to articulate his ideas on foreign policy and national security in any detail. Until he does, Bamford says examining the views of his closest adviser could provide some insight and “serious cause for concern.”