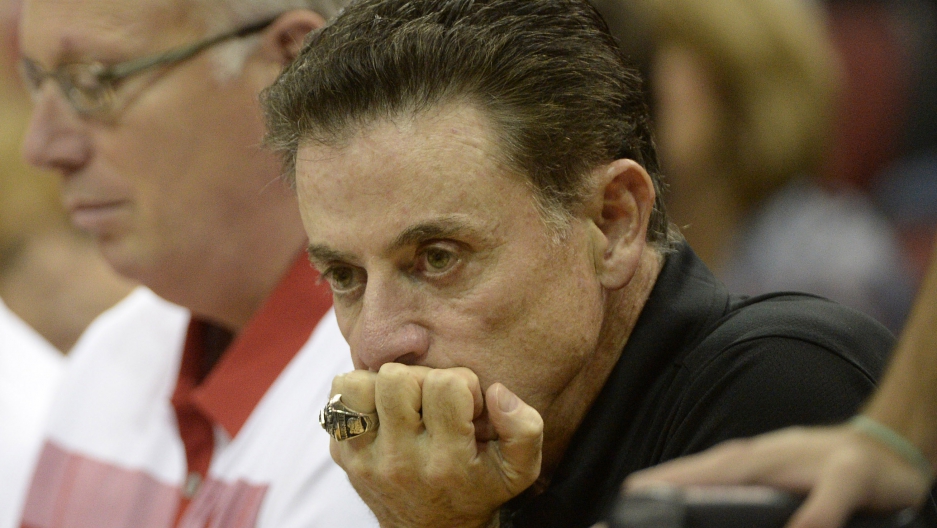 The college basketball season will open this weekend to much fanfare, but an escort-shaped shadow looms, cast by Louisville coach Rick Pitino and his staff's alleged recruitment tactics.

Pitino claims he had no knowledge that paid sex was being used to help recruit the high school players he so coveted — a statement that makes him either a liar or a very bad coach. Sort of like President Nixon during Watergate. If he knew, he was a criminal, and if he didn’t know, he was a pathetically bad administrator.

But there’s more to this scandal than determining what Pitino did or didn’t know. The truly scandalous aspect of the whole ordeal is that institutionalized sexism has become such a routine part of the game behind the game. Women are bait; women are rewards — they are not people. That's the message being conveyed.

Several years ago, I was an expert witness in a case involving four female students at the University of Colorado who had been gang raped by football recruits. The criminal case ended with plea bargains. The civil case, contesting that the university administration knew, or should have known about these rapes, was eventually dismissed after the coach, athletic director, chancellor and president all resigned in disgrace.

In depositions, other coaches discussed the pressure on them to use women’s bodies as a recruiting tool. In one case, boosters paid members of a sorority $1,000 each to be an escort for the weekend and show the recruits a good time. In other cases, recruits would greet their varsity hosts by asking “When do I get laid? I got laid at University X, and I got laid at University Y. If I don’t get laid, I’m not coming here.”

Events like this are remarkably commonplace, and they suggest, often, that male bonding and team camaraderie can be cemented by collective use of women. These activities normalize the buying of sex, as if it’s nothing more than a party.

It’s become so commonplace that often our response is to yawn in bemused resignation. “Everyone does it,” some will say. But that is simply not true. The vast majority of men do not buy sex. And the vast majority don’t think it’s right to buy or rent women’s bodies.

In fact, the Louisville scandal has erupted at a time when there’s enormous political debate and new initiatives to curb sex trafficking, with support from both men and women. Men all over the country are awakening to the underlying challenge of modern feminism and the demands it places on all of us to treat each other decently. These men are thinking seriously and constructively about masculinity and what it should mean today.

I keep thinking about those recruits who don’t feel comfortable with having sex purchased for them, the ones whose values, whether religious or secular, require that they treat women with equal dignity and respect. Are they not, also, coerced by teammates and coaches into behaviors they might find denigrating to women and demeaning to them as men?

Our nation’s coaches have a great opportunity to influence young men, to promote those virtues that have sustained us over millennia: honor, integrity, courage. Buying sex to entice recruits instills all the wrong values: entitlement, contempt for women.

Coach Pitino says he will not resign. “I will not let you down,” he promises.  Sadly, he — and his staff — already have.

Michael Kimmel is the director of the Center for the Study of Men and Masculinities at Stony Brook University.