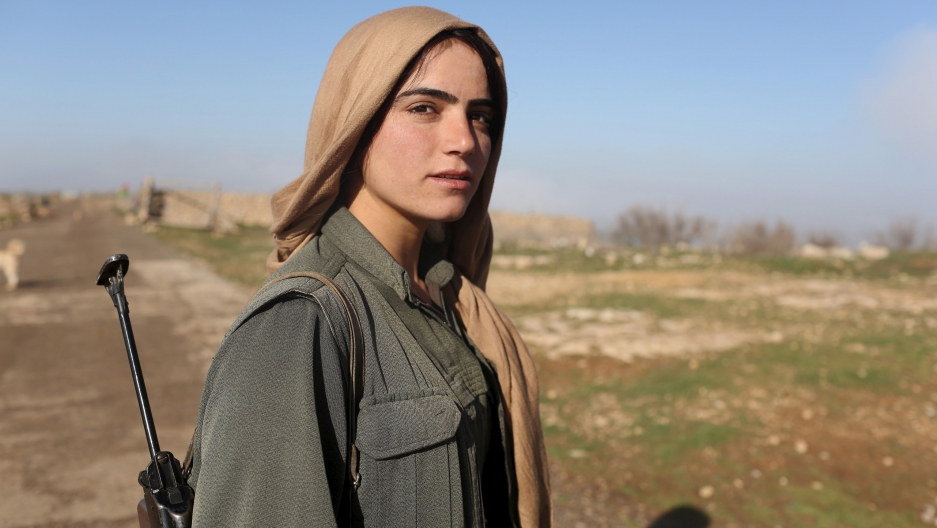 Boots on the ground, Iraq 2015. A female fighter of the Kurdistan Workers Party (PKK) - one of the groups involved in the new attack - stands near a security position near Sinjar, earlier this year.

The battle for Sinjar is on. The campaign to re-take the key town in northern Iraq from ISIS began with a massive US air campaign. Then Kurdish and allied forces moved in to cut the main roads in and out of town.

“The airstrikes woke us up,” says BuzzFeed’s Mike Giglio, who spent the night sleeping on Mount Sinjar, which overlooks the town. “And we watched the explosions from a distance.”

US warplanes carried out dozens of attacks, as the ground troops moved in. “Eventually we went down as well, to the outskirts of town,” says Giglio, “the airstrikes just hitting constantly … the pounding, you could feel it in your chest.”

Inside the city, ISIS struck back at the portion of town that the Kurds have held for the past few months, with suicide bombs and infantry assaults. The air attacks make up one of the heaviest air offensives since the US entered the war against ISIS last year.

American ground troops are not thought to be taking part, but there are likely special forces assisting with calling in the airstrikes, says Giglio. “I could have sworn I saw some Americans watching over ISIS from a ridgeline, embedded with the Peshmerga, but I didn’t get the chance to ask, and I could be wrong."

Sinjar was central to that intervention in 2014. That’s where ISIS began massacring men from the Yazidi religious minority and enslaving their women after they captured Sinjar. Hundreds of Yazidi troops are taking part in the new offensive.

Sinjar is important because it sits on the main road linking Mosul — the biggest city held by ISIS in Iraq — with Raqqa, the capital of the Islamic State, across the frontier in neighboring Syria.

The town is also highly symbolic for the Kurds, since their defeat there last year was a devastating blow to the Peshmerga’s reputation as a formidable battlefield force.

Troops involved on the ground include the Peshmerga forces of the Kurdistan regional government in northern Iraq; the Yazidis; together with forces from the Kurdistan Workers Party, the PKK (an outlawed separatist group from Turkey), plus their allies from Syria, the YPG. These include several units of women soldiers.