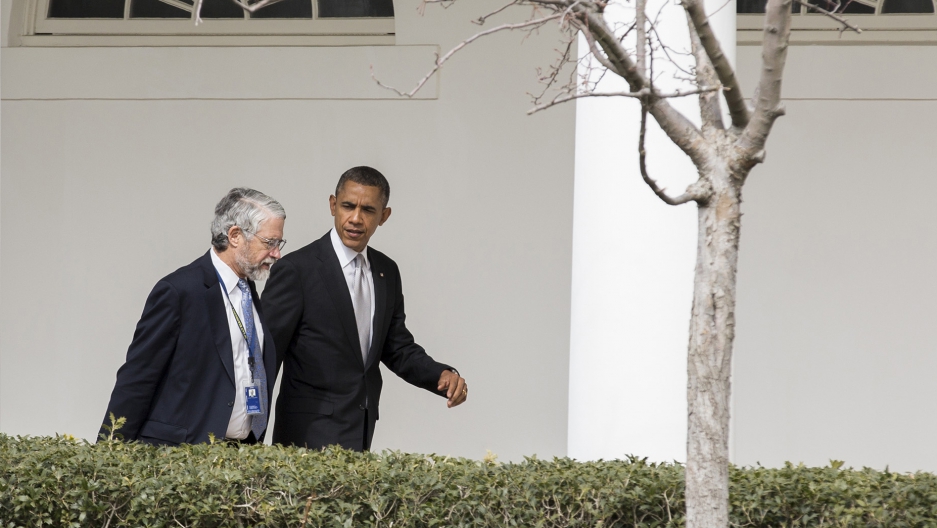 John Holdren, President Obama's chief science advisor, says he's optimistic about the world's nations striking a strong climate deal next month in Paris, in part because both the motivation and the means to fight the climate crisis are "growing all the time."

The global climate crisis has only gotten worse in the six years since the last big international climate summit in Copenhagen ended in near-failure. The pollution-cutting pledges made by the world’s nations heading into the next big UN climate summit in Paris in a few weeks aren’t enough to avoid likely catastrophic warming of the earth’s atmosphere. The US Congress remains dead-set against any action to address climate change.

And yet John Holdren, president Obama’s chief adviser on climate change and other scientific issues, is optimistic about our ability to meet the challenge and avert a climate catastrophe.

Holdren, who’s an MIT and Stanford-trained physicist and now heads the White House Office of Science and Technology Policy, says the technology for reducing our dependence on carbon-intensive fossil fuels is advancing rapidly.

“The cost of solar energy is plummeting,” Holdren says. “The cost of wind energy is falling. The ability to increase energy efficiency in ways that reduce emissions continues to impress. So as time goes on, and as our technologies get even better, countries are going to be able to be more ambitious (in their de-carbonizing efforts) because they're going to understand they can actually do it, and they can do it in a cost-effective way.”

One of the keys to making this happen, Holdren says, is to come out of the Paris summit in early December with a flexible global agreement that encourages countries to do more to cut greenhouse gas pollution as time goes on.

Holdren acknowledges that the commitments countries have made so far heading into to the Paris summit “are not sufficient” by themselves to avoid overshooting the 2-degree Celsius rise in global temperatures from pre-industrial levels agreed in Copenhagen as the upper limit of tolerable. In fact, he says, “no one ever imagined that these commitments… would suffice.” But, he says, they are a big step in the right direction.

“So the aim of the Paris conference is to come up with the framework that embeds the possibility—indeed the likelihood—of additional ambition” over time, Holdren says. “We think that will happen. Countries are going to continue to ratchet up their ambition as a matter of self-interest.”

Of course the “self-interest” of countries stems from the fact that since the Copenhagen summit the danger from climate change has only become more clear and present.

“We've learned a lot more and it’s increased our sense of urgency” since 2009, Holdren says. “All around the world we are experiencing torrential downpours in increased frequency and magnitude. We're seeing climate impact on the severity of drought in many parts of the world. Wildfires, which people had hardly thought about in 2009, are proving to be a big deal. And the understanding of sea level rise has improved greatly since then. We now know that there is the possibility of as much as two meters (6.5 feet) of sea level rise in this century.

That sea level rise would put much of the New York, Miami, San Francisco Bay and Boston areas under water.

“I believe, and I think most climate scientist believe, we are already experiencing dangerous” effects, Holdren says. “The question is, can we avoid truly unmanageable, truly catastrophic degrees of climate change?”

In answer to his own question, Holdren says, “we very much hope that we can.”

Holdren says that despite a constant stream of international crises and domestic challenges, president Obama “puts a very high priority” on addressing the climate crisis. And in the last few months the administration believes it has set the stage for considerable progress in Paris with its new plan to cut emissions from power plants and agreements with China, now the world’s largest CO2 polluter, to work together “toward a low-carbon transformation of the global economy this century.”

Still, given the scale and consequences of the crisis, Holdren’s optimism is not unbounded, especially given the political divide on the issue in Washington.

“I worry, and I know the president worries, that we haven't done enough,” Holdren says. “We are doing everything we can right now using executive authorities, things we can get done without requiring an act of Congress. But we could get more done if we had the congress with us. And I very much look forward to the day when Congress comes on board and works with the executive branch to do more to address this challenge.”