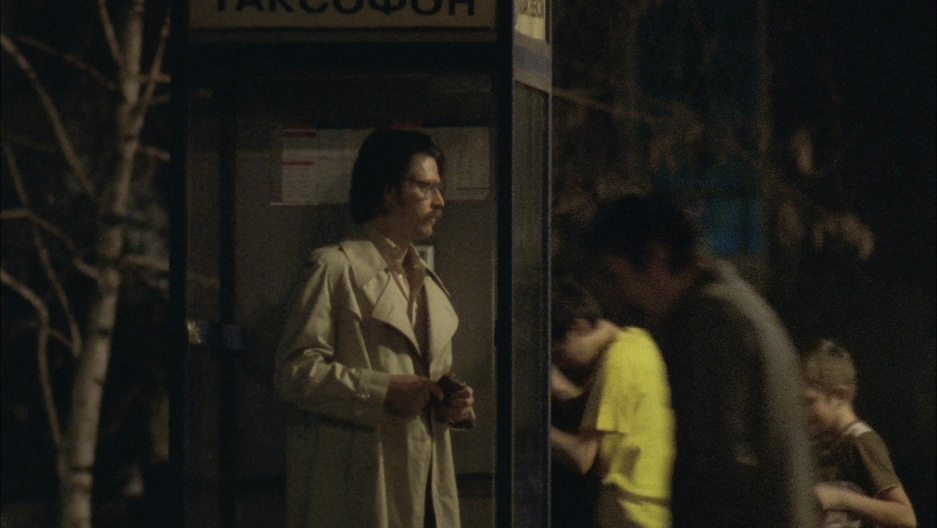 The movie "whiteonwhite:algorithmicnoir"is a thriller unlike any other. Eve Sussman directed it with her collaborators, known as theRufus Corporation. They shot most of the footage in Kazakhstan, improvising the script and taking advantage of the Soviet Union's once-grand, now crumbling utopian architecture.

The feel is paranoid sci-fi thriller, along the lines of Jean-Luc Godard's "Alphaville."In the movie, an American engineer, Holz, gets a job in a mysterious foreign place called City A, and "starts finding out things are wrong," Sussman says. "The water supply seems to be drugged with lithium; time seems to be slowing down; people are running out of language. The people who hired him may not be who he thinks they are. Everything is a little bit beyond his control."

But Sussman decided to edit the film in an unorthodox way. Working with programmer Jeff Garneau, Sussman designed a computer system that assembles thousands of clips of footage, voiceovers, and scoring elements in an ever-changing succession. There is no one version of "whiteonwhite." "The things I liked the most in my films and in other people's films were the things that happened by serendipity, that happened out of luck. And so I started wondering, 'Could we build a machine that would give us more luck than we could ever have in real life?'"

She calls the program the Serendipity Machine. "We start the computer before the audience enters, and it will always order in a different way, so there is no beginning, middle, or end, and it runs forever."

Sussman's film is state-of-the-art technology, but it's not trendy. "Because it's computer-driven, the first thing people ask is, 'Is it interactive? I want to get in there and tell it to show me only the shots of birds [for example].' My response to that is, 'It's a movie, and you're the audience!'" she says. "You are interacting with it by filling in the gaps between the narratives."

The trailer below is just one sample of the movie, since"whiteonwhite"changes with each screening. You can watch an online version of the filmhere.