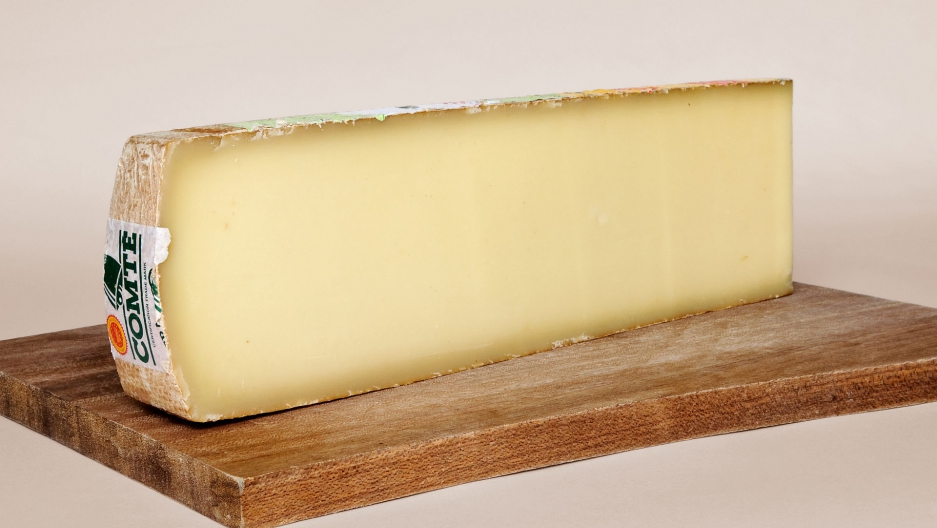 You can “say cheese” as often as you like, but no one in the eastern French town Goux-les-Usiers is smiling.

Police are investigating a crime there. Here’s what we know so far:

Under the cover of darkness, a gang of cheese thieves cut through a barbed-wire fence and used a crowbar to break into a Napiot dairy near the Swiss border. They made off with 100 wheels of hard, aged Comté cheese. Dairy farmers there are now considering installing security cameras.

“In a way it sounds like a joke,” says Ulla Majoube. She’s on the case. She's a food writer for L'Express in Paris.

“I mean they came at night, they used a simple crowbar to break in, to steal four tons of cheese! When you think of a heist, you think of a jewelry heist or a bank robbery, but you don’t think about cheese. But actually it does make sense. Cheese costs a lot of money and there is a black market for it.”

100 wheels of comté stolen - they must be crackers if they think they'll get away with it! https://t.co/NiKvuubcXD pic.twitter.com/KPSNuSM4vP

In all, over 8,818 pounds of Comté cheese has gone missing. Typically this sweet and nutty tasting French artisan cheese sells for up around $43 per pound or more depending on how long it’s aged, and whether it’s sold wholesale or by the individual slice at Christmas farmer’s markets that are popping up this time of year.

In the unlikely event that you come across a pale, creamy yellow wheel of Comté, check the designation of origin stamped on it. Normally the stamp verifies that it’s made from milk that comes from the unpasteurized milk of Montbéliarde or Simmental cows that feast on the lush summer grasses that grow in the Franche-Comté region of eastern France. If the stamp matches the numbers assigned to the Napiot dairy in Goux-les-Usiers, it could also prove that the cheese was stolen.

But France exports lots of Comté cheese. Chances are good there’s plenty of non-contraband Comté out there. I’m told it goes as well in a ham sandwich, it grates and melts well, pairs well with pinot noir, and it even complements a peppery saucisson. That’s a French sausage.

These French cheese thieves need to #Comté their senses quickly.The cops will sniff them out:https://t.co/MwEDOHH8Jt pic.twitter.com/8gcFTCONY5