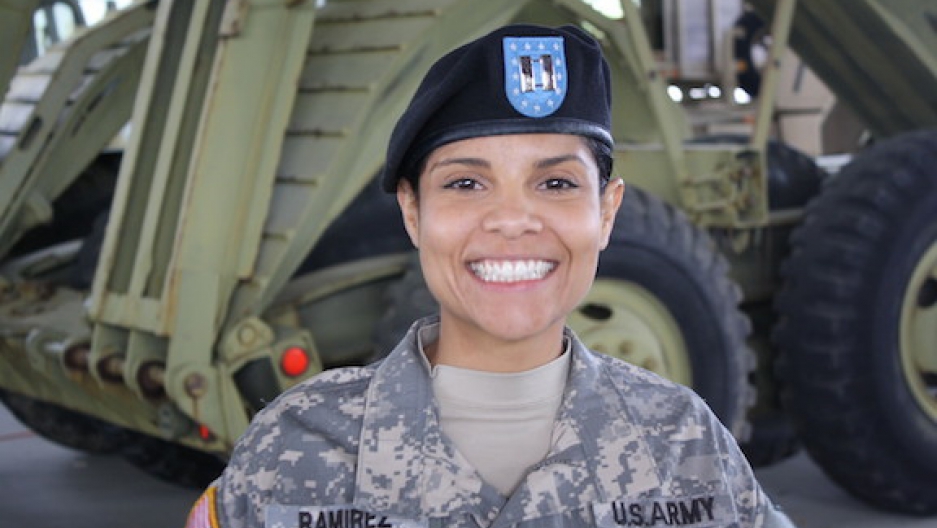 When Iraq war veteran Isaura Ramirez retired after 13 years in the Army, she found herself battling a new sort of enemy: depression.

The former captain says a 15-month deployment in Iraq left her feeling alienated and alone, even after she returned home. But she turned a corner, she says, thanks in part to her husband, who enrolled her in a comedy class.

"It's a great therapy," says the native of Puerto Rico. "There are days when I don't want to get out of bed, and my world seems like it's falling apart, but comedy is holding me together."

Comedian Ramirez got her start at the William & Mary Center for Veterans Engagement and the Armed Services Arts Partnership.  The center’s Comedy Bootcamp is an eight week comedy writing and performing class for veterans, service members, and military family members.

For part of her stage act, Ramirez draw inspiration from her time in the Army. Here’s one story she likes to tell.

“I miss being in uniform, just walking around, everyone comes up to you and says ‘Thank you.’ One time I was at a store and I had this mom come up to me with her 5-year-old daughter. And she said, 'My daughter wants to thank you for your service.'

"And I’m thinking, 'That was smart, I wish I’d thought of that.’ It was almost like she was saying, ‘Thank you for fighting for my freedom so I don’t have to make the same stupid career choice.'”

In fact, Ramirez takes pride in her Army service. Her LinkedIn profile highlights her deployment in Iraq in support of Operation Iraqi Freedom where she led, trained, and resourced a team of more than thirty truck drivers that completed over 400 missions delivering cargo and equipment throughout western Iraq.

“And then they switched me to training the Iraqi army. That was interesting,” she says. “I was a transportation officer, and I barely know how to change a tire.” Luckily, she says, her staff included knowledgeable sergeants. “I just had to come up with the concept,” she adds, “and we got the job done.”

But Ramirez remembers lonely hours during her 15 months in Iraq. “I’m a female Hispanic officer. There was no one there that looked like me that I could hang out with,” she recalls. “I was only around people from 9 to 5 … Then I was by myself, and I just got used to it.”

Isolation became a way of life for Ramirez, which she only began to confront in therapy. And now, in comedy.

“It helps me really change my outlook on life,” she says. “When something bad happens to me now, I’m like ‘this is going to be great material,’ whereas before I would just dwell on it and get more and more angry and spiral more into my depression.”

While Ramirez pursues a career in comedy she has no illusions about the challenges ahead. “But,” she notes, “one phrase I continue to hear again and again in the world of comedy is 'Fake it until you make it.’” Isaura Ramirez says that in uniform — and onstage — that guiding principle has given her the strength to keep going. “I only hope that my story helps other people get through tough times."

Callie Crossley: Women in the military are still fighting the battle against invisibility