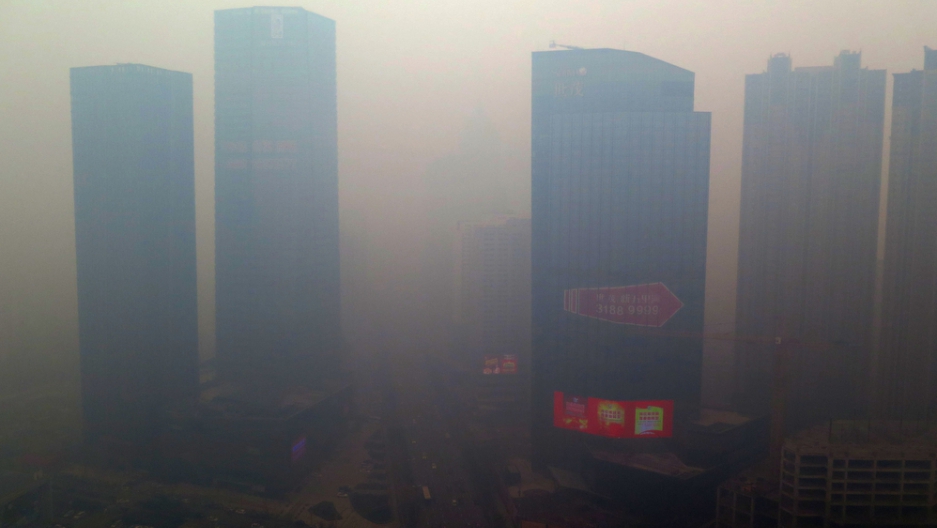 Residential buildings in Shenyang, in northeastern China, are shrouded in smog on Nov. 8, 2015.
Share

China probably doesn't want you looking at these photos right now, especially since the world is less than three weeks away from the much-anticipated UN climate change conference in Paris.

In Shenyang, a city of more than 8 million people, pollution readings were “the highest ever,” according to Greenpeace.

I truly lived "Under the Dome" today #Shenyang #China pic.twitter.com/RfVKyCvT4I

Apocalyptic scenes such as these are common in northern China during the winter, when the country cranks up its coal-fired public heating systems to keep people warm.

It's not only an embarrassing image for China, it's a diplomatic problem for its government. Representatives from more than 190 countries will meet beginning Nov. 30 to hash out a new global deal on climate change. One of the goals is to set targets for the reduction of carbon emissions.

Beijing has already agreed to reduce its heavy reliance on fossil fuels. It has invested more than any other country in renewable energy technology and its coal consumption is falling. The country has also drawn praise for setting a deadline of 2030 for its carbon emissions to peak.

But these new images are a reminder of how difficult it is going to be to meet that target. China’s carbon dioxide emissions accounted for 29 percent of the world’s total in 2013. They were twice the US level. Coal is still used to produce most of its energy. And the construction of dirty coal-fired power plants continues. That has made China the world’s biggest polluter and a key player in the climate talks.

Photos showing buildings rendered invisible by poisonous smog will likely increase the pressure on the carbon-belching country to take on more of the burden in the fight against climate change — and not obstruct the summit like critics say it did in Copenhagen.

China, of course, isn't the only problem. Plenty of other governments, including the United States, will be feeling the pressure at the climate talks.

The UN-accredited World Energy Council ranks countries based on their energy policies, energy accessibility, affordability and environmental sustainability. It's latest ranking, known as the Energy Trilemma Index, gave only two countries (out of 130) its top rating: Switzerland and Sweden.

Britain was downgraded after its government scrapped some renewable energy subsidies, while the United States and South Africa were added to the “negative watch list” for energy security issues.

A new report offered a glimmer of hope. It found that efforts among the Group of 20 major economies resulted in the falling of per capita greenhouse gas emissions in 11 countries, including the United States, Canada and Australia. Unfortunately per capita emissions are still rising in the world's most populous countries, China and India.

And that's a big problem for everyone.