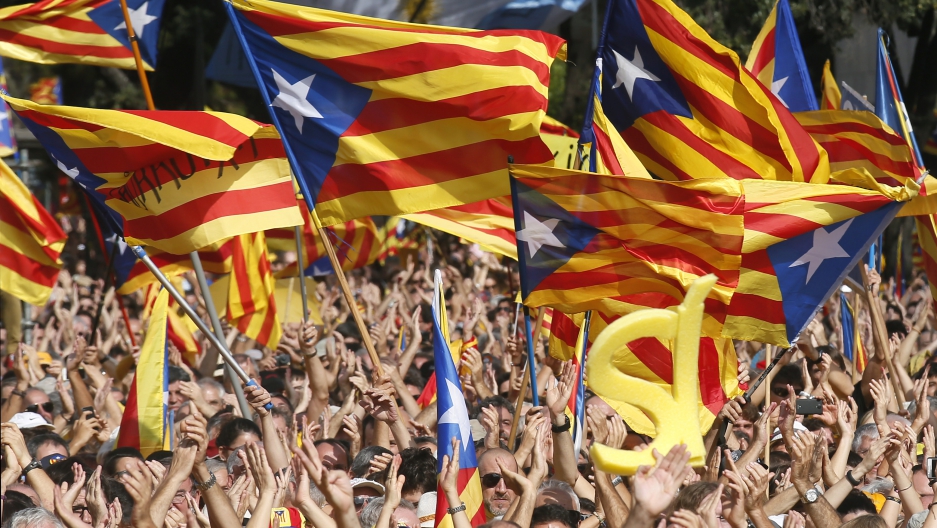 Sometimes a country comes face to face with an issue that’s so big and divisive, it seems only the highest court in the land could possibly sort it out. Kind of like how the US Supreme Court had to decide between Bush and Gore back in 2000.

Well, they're having a similar moment in Spain right now. But it's not about who should lead the country. It’s about whether the country should remain intact as it is right now. Big existential stuff.

At issue is whether the northeastern region of Catalonia, on the border with France, should be allowed to break free and go its own way. Separatist leaders in Barcelona say Catalonia should be independent from Spain because it has its own culture and language, and they’re tired of taking orders from Madrid.

But Spain’s national government is against it, and has asked the country's Constitutional Court to block Catalonia’s drive for independence. The court accepted the government’s appeal. So now what happens?

“Right now, we’re entering uncharted waters,” said Joseph Wilson, a freelance reporter in Barcelona who’s been covering the Catalan independence movement for the past few years. “We have a regional government that seems very prepared to defy Spanish law. Once that happens, it’s difficult to tell what comes next.”

This dramatic showdown between Madrid and Barcelona has very long roots. But the argument has now landed on the Constitutional Court’s lap because of a resolution passed by the Catalan regional parliament.

That measure set up a road map for Catalonia to break away from Spain within 18 months, and it requires Catalan officials to start setting up new institutions to handle the proposed new nation’s affairs. It also gives those officials permission to defy any orders from Madrid.

That includes the ruling from the Constitutional Court suspending the Catalan resolution to secede. Officials who disobey that ruling could face removal from their post and hefty fines. But given the tensions between Madrid and Barcelona, it’s not clear how those penalties would be enforced.

Spain’s prime minister, Mariano Rajoy, has said he will simply not allow Catalonia to secede. He accuses the separatists of trampling Spain’s sovereignty and centuries of unity. According to his government, breaking up that union is not something that Catalonia can do unilaterally.

At the local level, in Catalonia, support for a split from Spain has been growing for some time but it’s far from unanimous.

“Opinion polls consistently show that about 50 percent of Catalans want to separate now, another 50 percent roughly want to remain a part of Spain,” said Wilson.

That would seem to indicate a stalemate. So why the push to secede now? In a word, politics.

Catalonia’s regional government is currently controlled by pro-separatist parties. They won a majority of parliamentary seats in a vote last September, despite securing just 48 percent of the vote. “That’s the argument the politicians who are against independence use,” Wilson noted. “They say … there’s not a significant majority of Catalans who want independence.”

Both sides in this showdown have a lot at stake. While Catalonia accounts for about a fifth of Spain’s overall economic output, secession risks isolating the region from the rest of Europe. That’s because an independent Catalonia — unlike Spain — would not be a member of the European Union.

And while it’s impossible to predict where this is all going, reporter Joe Wilson thinks something has already changed in Barcelona. “If you talked to people here 5 or 10 years ago, very few people would have imagined they’d ever see an independent Catalonia.  But you could say there are a lot more people who believe it’s a real possibility now.”