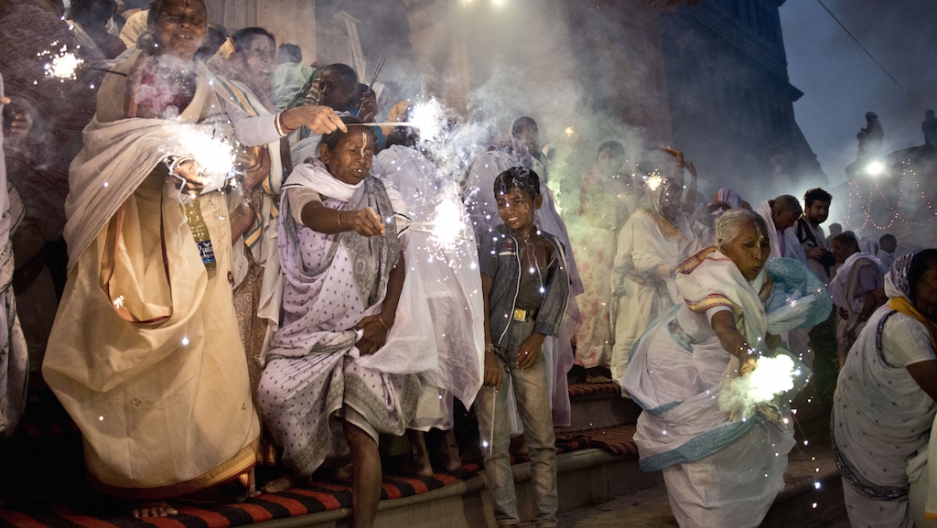 Indians wave sparklers as they celebrate the Hindu festival Diwali on the banks of the Yamuna river in the northern city of Vrindavan, Oct. 21, 2014.
Credit: ROBERTO SCHMIDT
Share

NEW DELHI, India — In the week leading up to the Hindu festival of Diwali, which falls this year on Nov. 11, every neighborhood in India becomes more beautiful. Houses are cleaned out, decorative lamps are lit, families reunite and gifts are exchanged. Diwali is considered to be the Hindu new year, the day on which winter “officially” arrives, and a time to pray for prosperity by felicitating the goddess of wealth.

It is also the day that air pollution across India spikes to five to eight times above the safe standard.

Two practices define Diwali — lighting earthen lamps all over the house, and setting off firecrackers. According to children’s rights NGO Bachpan Bachao Andolan, India produces nearly $38 million worth of firecrackers every year, most of which are sold in the weeks leading up to Diwali. Entire towns are dedicated to the manufacture of these fireworks. Every Indian child grows up knowing the names of each different kind.

Many Indian children, though, are too familiar with firecrackers — because they make them.

“During the festive season thousands of children are trafficked and used as cheap labor … and made to work in very hazardous conditions where a blast or tiny spark often leads to accidents,” says R.S. Chaurasia, the chairperson of Bachpan Bachao Andolan, which is currently campaigning against fireworks.

Chaurasia gave the example of Sivakasi town in the state of Tamil Nadu, which he said was home to 80 percent of India’s fireworks production. Fatal accidents and fires in its factories are an annual affair. According to Chaurasia, ignoring safety measures and hiring children allows for massive profit margins.

Consumers aren’t safe, either. Fire hazards and burn injuries during celebrations are common. And according to the Center for Science and Environment (CSE), a policy research organization, standards for what goes into fireworks are either non-existent or not imposed, allowing firecrackers to emit abundant toxic fumes into the environment.

CSE readings show that levels of carbon dioxide and particulate matter — particles of pollution suspended in the air — increase significantly during the festivities leading up to Diwali, and are the highest on the day itself. Last Diwali in Delhi, for example, the center recorded a level of PM2.5 — measuring the fine particulate matter that can enter the lungs and bloodstream — that was ten times the recommended standard. It was three times as high as Delhi’s average real levels, which are already considered unsafe.

“The body’s filtering mechanism doesn’t work against this small particulate matter,” Polash Mukherjee, a research associate at the CSE who has worked extensively on firecracker emissions, told GlobalPost. “It causes an exaggeration of respiratory illnesses, and the most affected group is really young children.”

Advocates recently came up with a novel way to highlight the problem: They petitioned the Supreme Court on behalf of their infant children. Two 6-month-olds and a 14-month-old appealed for immediate restrictions on the use of fireworks on the basis of their fundamental right to life and clean air.

“Our lungs have not yet fully developed and we cannot take further pollution through bursting of crackers,” said the petition, drafted by the toddlers’ families. “The smoke … during the festivals of Dussehra [a Hindu celebration in October] and Diwali virtually clogs the atmosphere and magnifies the risk of contracting lung diseases.”

Unsurprisingly, a Sivakasi-based group opposed the plea, claiming that the lives of 1.3 million employees of the firecracker industry would be affected.

The Supreme Court responded that the use of loud fireworks between 10 p.m. and 6 a.m. is already prohibited to limit noise pollution, and said that an all-out ban was unrealistic. It turned down the petition, instead reprimanding the government for not publishing public service advertisements discouraging firecrackers as it had asked in a ruling 10 years ago.

More from GlobalPost: India is learning what happens when you treat sanitation workers like garbage

The reluctance of authorities to take action in the face of all the evidence comes down to a combination of religious zeal and environmental apathy. Hindus say it is their religious right to set off firecrackers, while manufacturers insist that any spike in pollution from their products is only temporary. Amid India’s chronically dirty air, industry leaders argue, a few festivities are not a factor in the country’s respiratory problems.

Experts contest both assertions. Several campaigns against firecrackers point out that while lamps are a symbolic part of Diwali celebrations, firecrackers are purely celebratory — which means they could easily be curtailed, if not banned, without keeping Hindus from their religious rites.

The question of pollution is even harder to ignore. According to Mukherjee of the CSE, the air pollution around Diwali aggravates the ill effects of Delhi’s notoriously smoggy winter on people with respiratory problems. And the problem is not limited to temporary carbon dioxide and particulate matter levels.

“[Firecrackers also release] elements like heavy metals, which stay in the atmosphere for a long time and percolate into underground water, and stay in the soil for a much longer period,” Mukherjee said. Extended exposure can affect the kidneys, liver and the central nervous system.

And however temporary some festive air pollution may be, it adds to the problem of survival in India’s metropolitan cities. “People are leaving Delhi,” said Mukherjee. “Expatriates are returning to their own countries because they say Delhi is not safe for their kids, but we have to work here.”