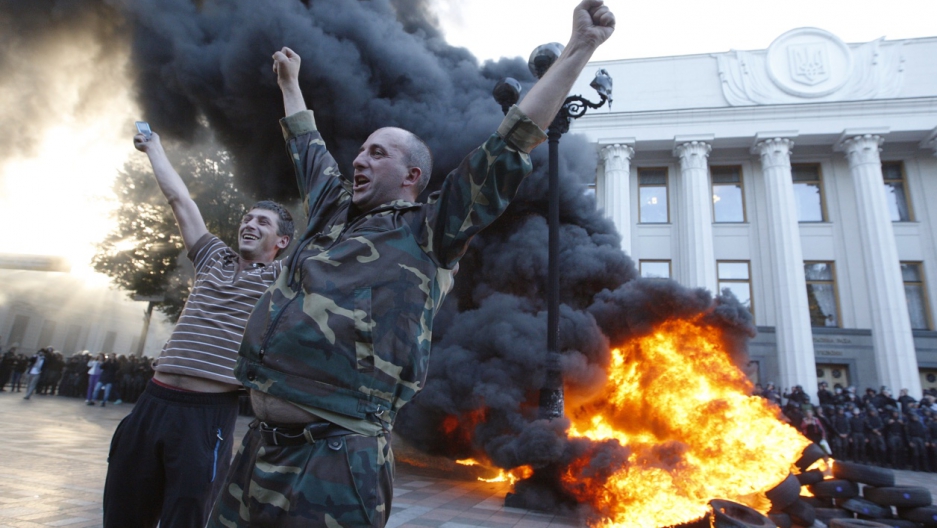 Protesters react as tires burn outside the Ukrainian Parliament on Sept. 16, 2014. Out-of-control corruption was one of the central reasons for the protests.
Share

KYIV, Ukraine — Even before the alleged assassination attempt, it was clear Viktor Shokin wasn’t the most popular guy in Ukraine.

The country’s controversial prosecutor general has been criticized repeatedly for failing to jail corrupt senior officials and undermining an anti-corruption effort that would pull Ukraine closer to the European Union.

That’s a problem, since cracking down on graft and sidling up to Europe were two keys demands of last year’s street revolution. Even top Western officials, including the US ambassador to Ukraine, have publicly criticized Shokin.

Last week, the Ukraine branch of watchdog Transparency International claimed the country’s chief jurist was “personally responsible” for failing to make good on his promises to battle graft. It said the 63-year-old had picked dubious bureaucrats, who served under ousted ex-President Viktor Yanukovych, to choose a new anti-corruption prosecutor.

More from GlobalPost: Ukraine's ousted autocrat is suing the country for violating his human rights

“Shokin’s attempt to create a puppet anti-corruption body is evidence of his stubborn resistance to conduct any reforms,” the watchdog said in a statement, “both within the prosecutor’s office and in the anti-corruption sphere.”

Since Shokin is a presidential nominee, Ukrainian President Petro Poroshenko has taken serious heat as his enabler – including some smear campaigns by local activists:

Then came the assassination attempt: investigators say a sniper, armed with a heat-sensing scope, fired three rounds into Shokin’s office late on Nov. 2 but that bulletproof glass foiled the attempt.

Yet in the murky world of Ukrainian politics, where violence has become disturbingly commonplace, it remains unclear who’s responsible for the brazen attempt.

The Shokin scandal is just a small drop in the ocean of corruption here. Discontent with both the president and Prime Minister Arseniy Yatsenyuk has been steadily growing, along with allegations that both men are flouting the law to shield their own interests.

That’s not only bad news for Ukraine’s civil society, but for its tattered economy: Western aid is dependent on enacting reforms, and just last week, Washington pledged another $1 billion loan — so long as Kyiv’s battle with corruption stays on track.

Observers say the country’s Western partners and its burgeoning civil society should be prepared to battle vested interests in Ukraine.

“This is a big fight,” wrote Brian Bonner, chief editor of the English-language Kyiv Post. “Victory is not ensured.”