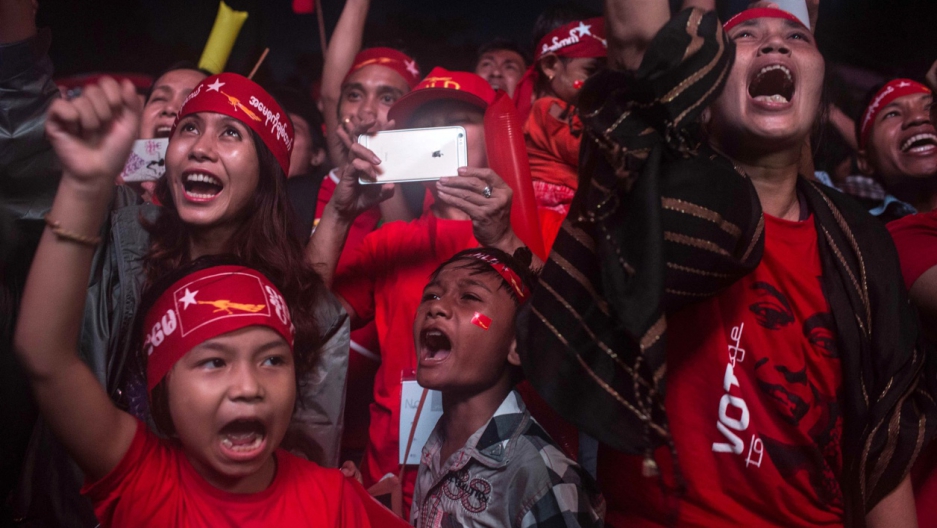 A person takes a picture with a camera phone as crowds gather for the election result announcement in front of the National League for Democracy's headquarters after Myanmar's first free and fair election on Nov. 9, 2015 in Yangon, Myanmar.
Share

This is a great quote:

“Nationwide, we won in some parts, and we lost in some parts. But we had a greater share of the losses.” That’s U Htay Oo, the ruling party leader in Myanmar, speaking to the Burmese media after elections there on Sunday.

He was putting it lightly. The elections essentially pitted the military against the pro-democracy movement. There was huge voter turnout across the country. It all unfolded relatively peacefully. And the military was crushed.

For decades Myanmar was an isolated authoritarian state. It began to open up several years ago, granting more freedoms — like, say, democratic elections — to its long-oppressed population. If it continues on this path, the United States has promised Myanmar aid and investment.

Results won’t be in for a while. But assuming the military elites don’t try to rig the results — or refuse to give up power — it will be the first time in almost five decades that the people of Myanmar voted freely.

What’s more, it looks like the National League for Democracy (NLD), led by Aung San Suu Kyi, will almost certainly have a majority in parliament. The military jailed Suu Kyi for 15 years for her outspoken calls for democracy.

The current constitution in Myanmar, which was written by the military, reserves a quarter of parliament’s seats for military representatives. So Suu Kyi’s party would need to win two-thirds of the available seats to have the kind of majority that could sideline the military. Based on exit polling, most election observers say that is a real possibility. That would means the NLD could choose a president and pass laws without support or input from the current military rulers. That would be huge.

It’s hard to know what the NLD would do with that power, though. While it says many of the right things, the party’s leaders, including Suu Kyi, are not without controversy.

The Nobel Peace laureate, for instance, has chided farmers who were using their newfound right to free speech to oppose the nation’s largest mine. The mine is a joint operation between a Chinese weapons firm and Myanmar’s military. GlobalPost Senior Correspondent Patrick Winn wrote that many saw Suu Kyi’s support of the mine as a failure to back fellow dissidents against an abusive military.

You can’t talk about reform in Myanmar without talking about the Rohingya. The Rohinyga are an ethnic group in Myanmar that also happens to be Muslim. Myanmar is mostly Buddhist. The Rohingya are one of the most persecuted groups of people in the world.

The Rohingya can't get married and they can't have passports. That makes them stateless. And that's the least of it. Officials straight up deny the existence of the Rohingya, calling them illegal immigrants from Bangladesh, even though many have lived in Myanmar for generations. Some are so scared to live in Myanmar they crowd barely functioning boats and push off, hoping for the best. Regional navies are not friendly when the Rohingya reach nearby shores. Some end up in these shocking death camps in Thailand.

So where does Suu Kyi fall on this issue? She’s disturbingly silent. In a 2013 interview with GlobalPost, Suu Kyi’s spokesman and confidante, Nyan Win, confirmed that the human rights leader had no plans to champion the Rohingya cause despite criticism swirling around her silence on the crisis.

“She believes, in Burma, there is no Rohingya ethnic group,” he said. “It is a made-up name of the Bengali. So she can’t say anything about Rohingya. But there is international pressure for her to speak about Rohingya. It’s a problem.”

Maybe some in Myanmar will soon be freer. But probably not everyone.

Budi Waseso, Indonesia’s anti-drugs chief, must be on drugs. To up security in a country where jail administration is notoriously corrupt, he has come up with a plan to build a prison island for drug offenders on death row that is surrounded by some kind of moat. He is then going to travel the country collecting the most aggressive crocodiles he can find. This, he says, will help prevent prisoners from escaping.

"We will place as many crocodiles as we can there. I will search for the most ferocious type of crocodile," he was quoted as saying by local news website Tempo.

His reasoning? You can’t bribe a crocodile. The plan is, um, still in the early stages.