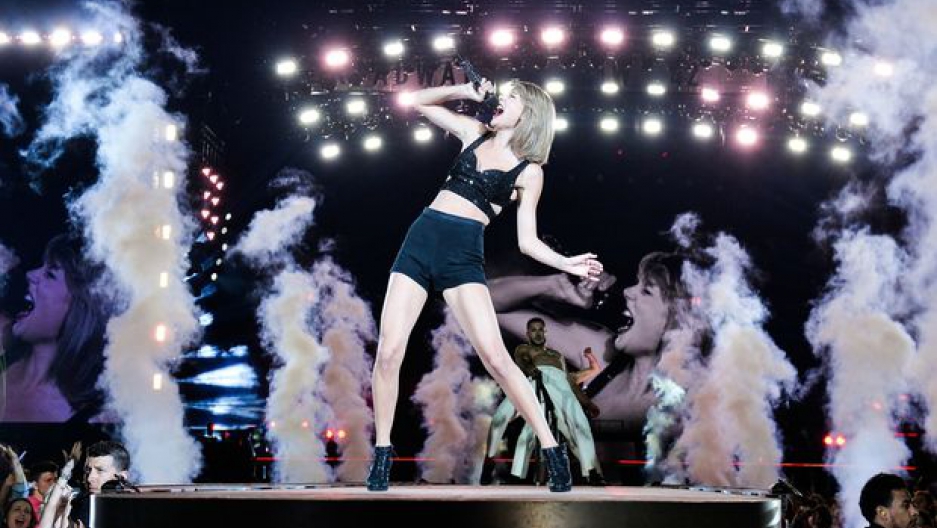 Taylor Swift in a Toronto performance of her 1989 world tour

We all know that pop hits — and the stars who sing them — are carefully managed products. John Seabrook, the author of a new book called “The Song Machine” explains how today’s pop songs are the result of an assembly-line method.

“What is new is that rather than have a melody writer and a lyric writer sit down together in a room, with production added later, now the production comes first. The reason it’s done that way is, it’s a much faster way of producing a large number of songs. You can have a producer write a few tracks, send them out digitally to a number of melody writers, and get multiple potential songs for every track they’ve composed,” Seabrook says.

As Seabrook explains, pop songs are now mostly about an underlying “musical bed” focused on a chord progression, beats, and a very short melodic phrase that usually comes at the chorus. “It distills the melodic essence of the song without actually giving you much of a melody. It's the essence of the melody.”

Modern pop also includes a method known as “comping” wherein a singer records phrases or even single words over and over. “So you can take 40 takes on one line and 40 takes on another line and then out of those 40 takes just take the very best take or even half the line. And you get a vocal that is in no way natural, but just absolutely pops out of the record,” Seabrook says.

This industrialized method of producing songs means that many of the same people write songs for various artists, and many songs sound the same. In fact, in the case of Beyonce’s “Halo” and Kelly Clarkson’s “Already Gone,” the songs actually are the same.

“It is the same track, literally. Ryan Tedder made the same track and sent it out to two different melody writers. Two different songs were written. Somebody screwed up and forgot or something happened, and Beyonce came out with “Halo.” Kelly Clarkson was about to release “Already Gone” and wanted to pull it from her record. That didn’t happen, and in fact it went on to become just as big a hit as “Halo.” So I guess the listeners either didn't notice or didn't care,” Seabrook says.

Today’s pop machine has its roots in 1990s Sweden, with a DJ whose artistic name was Denniz Pop and who combined rhythmic R&B with pop music to create wildly successful hits.

“Several advantages worked for the Swedes. We come from a world where, you know, white people aren't supposed to be writing R&B songs. But the Swedes, they sat down and they didn't care,” Seabrook says. “They also didn't have the baggage of all of our highfalutin English metaphors and double entendres and witticisms. They don't take English to that level and so they tend to listen more to the syllables and how they match up with the sounds and care less about what the line means.”

This new way of producing music may not be the same way the Beatles wrote songs, but Seabrook stays away from calling people like Max Martin and pop stars like Taylor Swift hacks.

“Max Martin ... he's some kind of genius. Comparing his work to the body of the Beatles’ work, you don't really see any developments. You don’t feel the politics, you don't feel what's going on outside,” Seabrook says. “There’s an old Taylor [Swift] and a new Taylor, and the dividing line is when Max Martin started writing songs with her last album, Red. It’s really almost two different singers. They both have incredible qualities but they have very different kinds of appeal.”

The next singer Seabrook predicts will succumb to the modern machine of the pop industry?

“The next one who's going to join the dark side is Adele,” Seabrook says. “I guarantee you that Adele will have Max Martin songs on this coming album.”