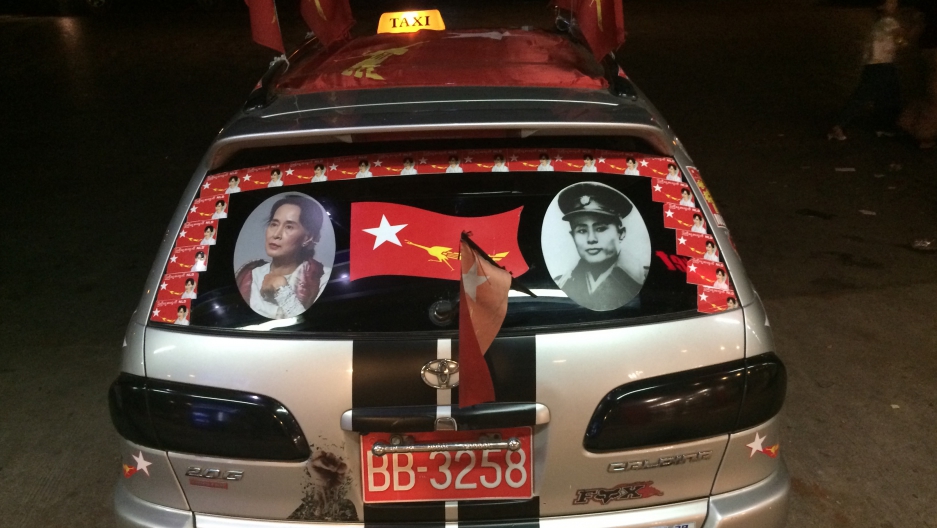 A taxi in Yangon decorated for Myanmar's election: a picture of Aung San Suu Kyi (l), and her late father, Aung San (r), who is revered as the father of modern Burma.

In today’s Myanmar, you might almost forget that Aung San died nearly 70 years ago.

Young politicians still put his photo in their office. Rock singers still write songs about him.

And on the streets of Yangon, you can buy Aung San’s photo right next to photos of his daughter: Nobel Peace Prize winner Aung San Suu Kyi.

Sithu Maung, a student, says when he was growing up, his teachers would talk about General Aung San. “But they didn't explain about student leader Aung San.”

Back in the 1930s when the country was part of the far-flung British Empire, Aung San was a student at the respected Rangoon University. And, with the student union, he started leading protests against Britain’s imperial rule.

After the war, General Aung San signed an agreement with Britain in 1947, guaranteeing Burma independence within a year. And his government also negotiated a landmark deal guaranteeing rights to several of the country’s ethnic minorities.

But just months before independence became official, Aung San and six members of his Cabinet were assassinated. He was 32.

Thant Myint-U, a historian and writer whose grandfather served in the government with Aung San, says at the time of Aung San’s death, Burma was already struggling.

“The country had almost no institutions, no people with experience in government, the economy was in ruins, every ethnic minority wanted to go in a different direction. It would have taken a miracle to hold things together.”

After the coup, Aung San was downplayed some, but still celebrated — as the father of modern Burma; the founder of the military that now ran or subjugated the country. His face was on the currency, in textbooks and in government buildings.

Just one minor detail was missing — his role as student leader who protested oppression was brushed aside.

But that didn’t mean everyone forgot.

In 1988, huge student-led protests broke out against the military dictatorship — and many of those students marched holding the photo of Aung San.

The military junta crushed the protests, killing thousands and imprisoning more. And it’s here where the legacy of Aung San got tricky, at least for the military government. Because this is when his daughter, Aung San Suu Kyi, emerged as the leader and symbol of the fight against Burma’s oppressive military dictatorship.

Historian Thant Myint-U says it became a bit of a Catch-22 for the military leaders, because they could no longer celebrate Aung San and use him to bolster their legitimacy without invoking his daughter.

But “it was impossible to simply erase him completely, not just from people’s memories but even from the school books and official texts,” Thant Myint-U says.

The government tried, though, and over time Aung San’s face even disappeared from the Burmese currency. But Aung San’s stature as a national hero only grew, and as one Burmese recently put it, he’s become almost deified.

Sithu Maung, who was a student leader in the 2007 protests, known as the Saffron Revolution, says, “Aung San is a role model. Not only for me but for every youth.”

In 2010, the military government gingerly began embracing Aung San again. They re-opened his museum in Yangon for daily visits, and when Suu Kyi met military man-turned President Thein Sein in 2011, a portrait of Aung San hung prominently in the background.

In many ways, today’s Burma reflects Aung San’s Burma. Students like Sithu Maung still lead protests; some were recently arrested. The country is struggling with how to give rights to ethnic minorities. And although she’s faced some criticism lately, the leader most Burmese still pin their hopes on is Aung San’s daughter, Aung San Suu Kyi.

When it comes to Aung San Suu Kyi, Sithu Maung says something that you hear, kind of, a lot. “Basically, people love Aung San Suu Kyi because she’s the daughter of Aung San. She has his blood.”

Of course, Suu Kyi is a respected leader in her own right, but it has been a transition. At campaign rallies she often stands on a stage flanked by two large photos: one of her and one of her father. People sing songs — songs for her and songs for him.