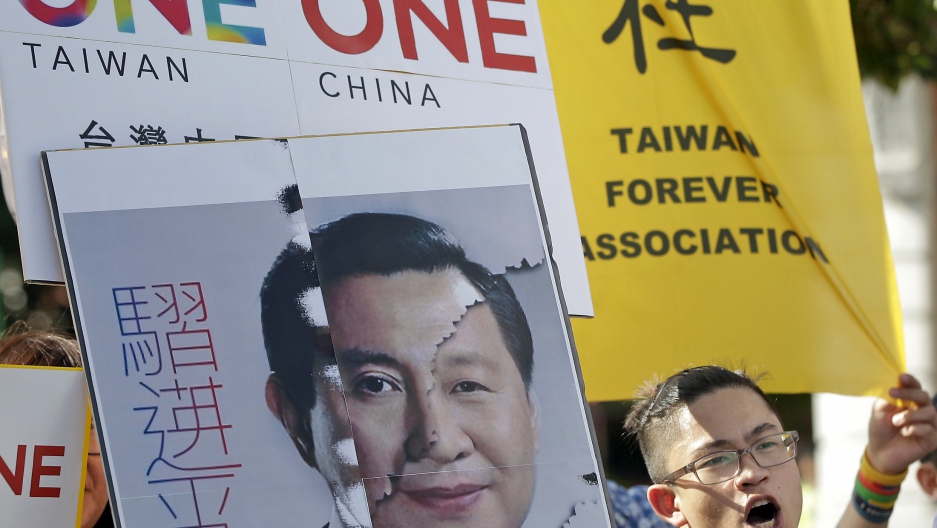 An activist holds a placard showing the merged faces of Taiwan's President Ma Ying-jeou and China's President Xi Jinping, to protest against the upcoming Singapore summit meeting between the two leaders.

It’s been 66 years since the guns stopped firing in the Chinese civil war. The Communists won, conquering the entire mainland. But many of their Nationalist enemies were able to escape, and were able to hold on to the island province of Taiwan, thanks partly to the protection of US naval power.

The nationalists maintained the principle that they were the legitimate government of all China. Meanwhile, Beijing denounced them and their ‘renegade province.’ Relations were hostile for decades.

On Saturday, the presidents of both Chinas will meet for the first time. Beijing’s Xi Jinping will meet his Taiwanese counter-part, Ma Ying-jeou, in neutral Singapore.

“On the surface, it’s quite an historic breakthrough between the two sides,” says the BBC’s Cindy Sui in the Taiwanese capital, Taipei. “After all, they have never signed a peace treaty since the civil war ended in 1949.”

It’s also significant, she adds, because it’s one of the last unresolved issues of the Cold War, and she offers a comparison. “Imagine President Obama meeting with Raul Castro. That would be huge news worldwide. So this is something similar ... and unlike Cuba and the United States, the two sides have yet to normalize relations.”

“But at the same time,” Sui continues, “we have to look at it from the perspective of what has happened in Taiwan over the last few years.”

“Relations have improved in an unprecedented way since President Ma Ying-jeou came into power (in 2008) and started building warmer ties and reducing tensions with Beijing,” says Sui. "[But] we have a significant portion of the population here that is quite suspicious of closer ties with China. They see it as potentially hurting Taiwan’s sovereignty and independence.”

Many Taiwanese do not identify with the old Nationalist idea of Taiwan as home base of the 'Republic of China,' especially those descended from the people who lived there before 1949. Some don’t see Taiwan as being part of China at all, and support the idea of full independence and sovereignty for the island state.

“So given that President Ma only has about six months left in office — his last term in office — and given the public opinion in Taiwan, his hands are tied, and he really can’t sign any agreements with Beijing. He can’t even issue a joint statement, with President Xi Jinping from China. So basically, it’s just a chance for the two leaders to talk, and perhaps build mutual trust between the two sides, and just to get to know each other better.”

To make the meeting go smoothly, no flags or other state symbols will be visible, the two leaders will only address each other as ‘Mister’, and they’ll even split the dinner tab. “That’s very unusual in Chinese culture,” says Sui, “to split the bill at a banquet. But they have agreed to each pay their own share.”