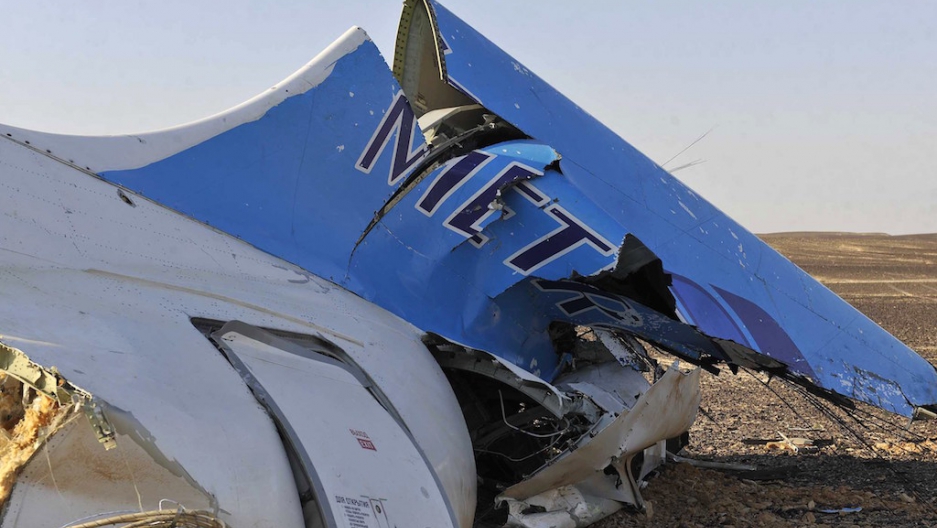 A handout picture from the Egyptian Prime Minister's office shows the wreckage of a crashed A321 Russian airliner in a mountainous area of Egypt's Sinai Peninsula on October 31, 2015.
Credit: SELIMAN AL-OTEIFI
Share

They think it was a bomb.

That’s the answer to the question everyone’s been asking since a Russian plane broke up in mid-air as it flew over Egypt last weekend: Why?

US officials now say that it’s “a highly possible scenario” that Metrojet Flight 9268 was bombed. Unspecified intelligence indicates that the crash was a terrorist attack, possibly by Islamic State or its affiliates, confidential sources have been telling the press. UK Prime Minister David Cameron has said the disaster was “more likely than not” caused by a bomb and has ordered British airlines to suspend flights to and from Sharm el-Sheikh on the Sinai peninsula, leaving hundreds of tourists stranded.

The allies are convinced. Egypt and Russia, not so much. Both call the bomb theory speculation and caution against jumping to conclusions before the investigation is complete. And when will that be? Not for many more months.

Certain sections of the UK’s press — even, on occasion, its prime minister — are fond of referring to migrants seeking to reach Britain as a “swarm.”

Call it island mentality, call it paranoia or something worse — the UK has proved itself among the most reluctant countries in Europe when it comes to taking in refugees. Even those fleeing Syria, who you’d think have a pretty incontestable claim to asylum, have found British doors only partially, grudgingly, opened. The government has promised to take in 20,000 Syrians over the next five years, though unlike other EU countries, the UK prefers to resettle its refugees directly from camps in the Middle East rather than take in those already languishing in Europe.

So far a couple hundred Syrians have reached the UK this way. More than half of them have ended up in a single city. Bradford, 200 miles north of London in West Yorkshire, proudly declares itself a “city of sanctuary.” Do the new arrivals stick out there? Hardly. The area is already home to thousands of immigrants, mainly from Pakistan and Bangladesh, as well as generations of their children. It has one of the largest Muslim populations in the UK.

In fact, the Syrians fit in all too well: just like the locals, they struggle to find decent jobs. Bradford has one of the country’s highest rates of unemployment. Which begs the question — if one struggling post-industrial city can offer “sanctuary,” why can’t the rest of the UK?

Mexico’s Supreme Court yesterday ruled in favor of recreational marijuana use — a landmark step toward legalizing pot. That either makes Mexico more progressive than the US, where Ohio this week declined to become the fifth state to drop prohibitions on weed, or — depending on your views — puts it on a primrose path to drug hell.

Some say that decriminalization could be a step out of the drug hell that Mexico is already in. The cartels that ride roughshod over the country’s existing laws on narcotics — not to mention the ones against murder — stand to lose at least part of their cannabis business if smokers are allowed to grow it themselves. Others say it’s a question of personal freedom — like having the right to drink alcohol, or marry the person you choose.

Whatever the arguments for, it’s clear that more and more of the Americas are listening to them. In 2013, Uruguay became the first state in the world to nationalize its marijuana market. Canada’s new government has promised to legalize recreational use. Brazil, Chile, Colombia and Costa Rica are all debating allowing patients to smoke for medical reasons. Twenty-three American states plus DC have already done so. Whatever Ohioans may say, the continent is looking greener and greener.