Alex Stupak is the chef and owner of Empellón Cocina in New York City. It’s a Mexican restaurant with a twist. Lots of twists.

That makes sense when you know that Stupak made his name as an award-winning experimental pastry chef, at restaurants including New York's wd~50.

He came of age a few years back — when liquid nitrogen, hydrocolloids and other experimental ingredients ruled the kitchen: the time of so-called molecular gastronomy.

"You take a dish of strawberries, and the strawberries disappear because they're manipulated in so many different textures. If you think of the modern art world, it became more about the act of doing it rather than the result — that's what this was as well. It was very much about shock or novelty, or really trying to provoke and change the way people thought."

Stupak was working for chefs he calls the "kings of this kind of cooking," but in his spare time he was thinking what he was going to do when I had his own restaurant. "When things are provocative and new, after a while they catch on and become mainstream," he says, "and so for me it was time to move on."

A tortilla changes everything

"I began eating a lot of Mexican cuisine in my spare time. I fell in love with a Mexican girl from LA and we moved in together — and she was cooking it for me. The turning point was actually very simple: I had a tortilla. It was the first time I'd ever had a tortilla when someone took fresh masa made from corn, and pressed it out by hand and put it on a hot griddle and served it to me immediately."

This was in 2008, at a restaurant in Los Angeles called La Parrilla. Stupak remembers it being decorated "in this crazy psychedelic way that only Mexican restaurants could be. There's colors that you didn't know existed juxtaposed in ways that you couldn't imagine. There are paper streamers, there's folk art: it looks like 15 different quinceañeras happened there at one time."

"I don't know how to describe it. You hear Americans say that they prefer flour tortillas — it's because they've never had a corn tortilla. The corn tortillas we're used to having, we buy them at the grocery store, and they're mealy and crumbly. These were not that way. They were soft, supple, dense and had an intangible, but very present, corn aroma about them. And once I had one, I wanted to wrap everything you could possibly eat in a tortilla."

With the aroma of a fresh corn tortilla wafting around his brain, and as crazy as it may have seemed to those around him, Stupak decided he was going to write a business plan for a Mexican restaurant.

"There are many people who have been documenting and codifying this cuisine who feel that it's not to be played around with or fooled around with," says Stupak. "I've always found that ironic because the cuisine as we know it today is a result of indigenous fusion. So the experimentation revolves around where you draw the line." 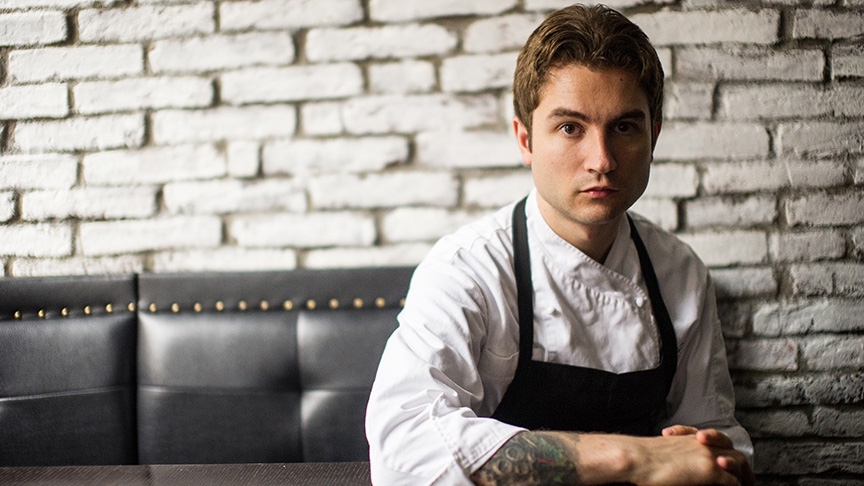 So, at Empellón Cocina, Stupak asks could Mexican cooking keep its integrity and yet absorb another culture?

"Can it absorb things that are inherent to New York City cuisine, such as pastrami? I would like to see Mexican cooking become that radical and not even for a second would people think that it was losing its own identity. It's actually imparting its identity onto other things."

There are critics, he says: "You will have people eat in your restaurant and go, I get what you're trying to do. You'll also get responses like, this is not how this is done. I get it. At the end of the day — I know it sounds odd — people want a restaurant to be loved unanimously. But I've made the decision in my career that I would always rather be provocative that homogenous and uniformly loved."

Divisiveness, for Stupak, is a mark of success.

If Mexican colonists laid down roots among the Old World delicatessens of New York City, I like to imagine that this is the bastard taco they’d cook. A multi-day brine plus a 6-hour low-and-slow roast means this dish takes advance planning. But the longer you let the pastrami cure—three days is the minimum, but a week is ideal—the better chance you have at yielding insanely tender, well-seasoned meat permeated with the flavors of brown sugar and honey. The extra time pays off in shreds of coriander-scented pastrami, cut with tart pickled cabbage and mustard seeds.

FOR THE PASTRAMI BRINE

FOR THE P ICKLED CABBAGE AND MUSTARD SEEDS

TO ASSEMBLE THE TACOS

2 limes, each cut into 6 wedges

BRINE THE PASTRAMI: In a 2-quart saucepan, combine 6 cups waterwith the ²⁄³ cup salt, brown sugar, curing salt, and honey. Bring to a simmer, then immediately remove from the heat, transfer to a bowl, and set into an ice bath to chill.

Place the short ribs in a 4-quart container with a lid. Pour the chilled brine over the meat and transfer to the refrigerator. Brine for at least 3 days and up to 1 week.

MAKE THE FILLING: Set a 12-inch cast-iron skillet over medium heat for 5 minutes. Add the peppercorns and coriander seeds and toast, shaking the pan, until fragrant, about 3 minutes. Remove from the heat, transfer to a spice grinder, and grind to a fine powder, working in batches if necessary. Set aside on a plate.

Preheat the oven to 300°F. Remove the short ribs from the brine and rinse under cold running water. Pat the meat dry with paper towels and transfer to the plate with the ground spices. Coat the meat completely with the spice rub. Nestle the short ribs in a 5½-quart Dutch oven. Pour in enough water so that the short ribs are half-submerged (about 2 cups) and cover tightly with a lid. Place in the oven and cook for 6 hours, or until fork-tender. Check the short ribs periodically; you may have to continue to add water to keep the level halfway up the meat.

MAKE THE PICKLED CABBAGE AND MUSTARD SEEDS: Reheat the skillet over medium heat. Add the cumin seeds and bay leaf, along with the 1 tablespoon black peppercorns and 1 tablespoon coriander seeds. Toast, shaking the pan, until fragrant, about 30 seconds. Remove from the heat and transfer to a 4-quart saucepan.

Add the cider vinegar, onion slices, garlic, sugar, and 2 tablespoons salt to the saucepan and bring to a simmer. Remove from the heat and infuse for 5 minutes. Set up a fine-mesh sieve over a bowl and pass the liquid through the strainer.

Remove the meat from the oven and let rest undisturbed for 1 hour at room temperature. Transfer the pastrami to a cutting board to rest. Use two forks to shred the meat and set it aside in a warm place. Make one batch of tortillas and hold them warm.

ASSEMBLE THE TACOS: Lay out the warm tortillas on serving plates. Place some pickled cabbage on each tortilla and divide the pastrami evenly among the tacos. Top with the mustard seeds and minced onion. Squeeze a couple of the lime wedges over the tacos and serve the rest on the side.