Shara Wordensang Bach in school but at home she listened to WJLB, Detroit's hip-hop and R&B radio station. That's how her love of Whitney Houston blossomed. In her junior year of high school, her parents decided to move to Iowa. Wordenwas devastated. She was leaving behind her friends and her first love. But she still had Whitney. "'I Will Always Love You' comforted me as we moved," Worden says.

In college, Wordenjoined a Christian cover band. At the time, her favorite Whitney song was "I Have Nothing," the third single from "The Bodyguard" soundtrack. She tried to convince her band mates to cover the song. She even changed the song's lyrics to appeal to them --- "to turn this love song into alove songto Jesus."

Still, her bandmates refused. "They just made fun of me," Worden says. "I was determined to learn how to play my own songs. I wasn't going to have someone else be in charge of what I wanted to do musically."

Now, Worden is the singer and songwriter behind the band My Brightest Diamond. Her chamber opera "You Us We All" plays next week at the Brooklyn Academy of Music. Worden wrote the opera, and also appears in the production. Her character, Hope, even sings amusical appeal to Whitney Houston in a moment of darkness, petitioning the woman Worden describes as "the pinnacle priestess of the divine answer." 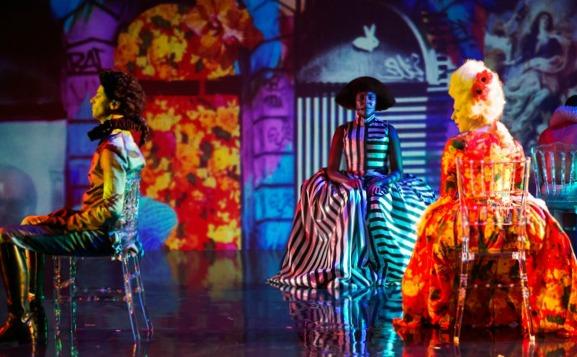 Shara Worden appears inher original opera, "You Us We All"
(Jean van Lingen)