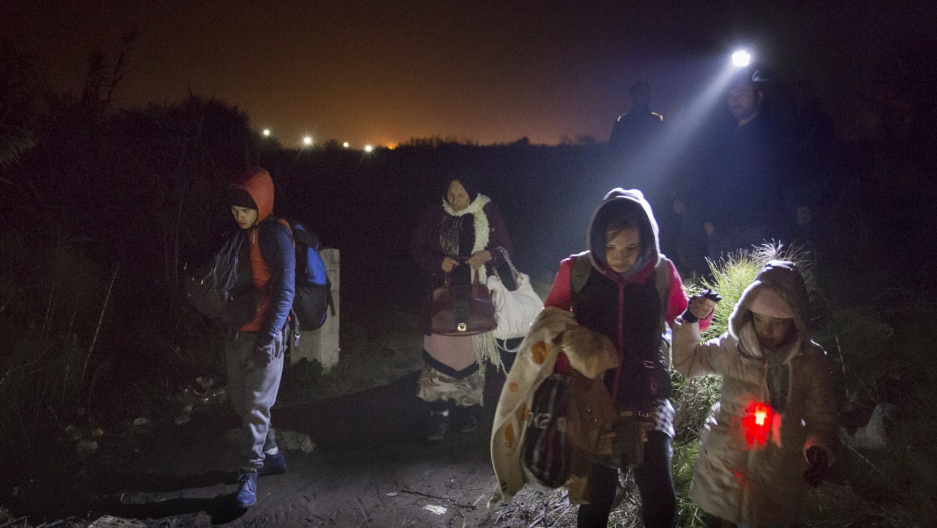 Thousands of migrants and refugees arrive daily by train into Tabonovzce, Macedonia, on their way north. Volunteers with flashlights illuminate their path as they walk to an informal crossing point into Serbia.
Credit:

It was two months ago when Driton Maliqi first began to keep a pillow and blanket in the back seat of his car, when it began to get too cold to sleep outside.

“It was summer here,” he says, thinking back on when the number of refugees and migrants making their way through Macedonia spiked from a trickle to thousands a day.

With no help from the government or aid groups, Maliqi’s mosque organized a small group of volunteers to help people in search of safety and stability in the European Union. The volunteers set up tables at the main train station along Macedonia’s border with Serbia to hand out food, warm clothing and give directions.

These days, Maliqi calls his car his office. It’s where he makes calls, holds meetings, eats and sleeps.

“We don’t have [a] bathroom or shower,” he says, laughing, “but there are some wet wipes!”

The approach of winter weather is making the already difficult journey for migrants more treacherous. Aid groups are scrambling to respond, but in Macedonia, Muslim Albanian groups, like Maliqi’s, mostly organized by mosques, were the first to respond. And they remain the most organized.

Before the migrant and refugee crisis, Maliqi was doing doctoral work in political science, spending his nights and weekends at home with his wife and young daughter.

Now, he’s only home a few times a week to grab a change of clothes or a nap. He spends most of his time at a train station where the thousands of refugees and migrants dropped off every day must then cross over into Serbia on foot.

As people climb down from overpacked trains, the scene is chaotic. People are tired and confused, and in the confusion families are easily separated.

“Slowly! Slowly!” yell some of the volunteers, as crowds rush a table of free soup, bananas and water bottles. Most of the volunteers here have never done any kind of humanitarian work before, but quite a few of them speak some Arabic because of their religious education.

One volunteer says “Salam Aleikum” to a Syrian family waiting for soup. He later explains in Arabic how to walk from here to the Serbian registration center.

Macedonia is one of the poorest countries that these migrants and refugees will pass through as they travel to the heart of the European Union. The five kilometer walk across the border into Serbia is along a dirt path that’s pitch black at night.

“Oh my God, when I came first time here I’m getting so mad. It’s dangerous!” says Zico Zahcheri, an imposing middle aged man helping out from the local mosque. He holds a flash light to help light the way: “Every 500 meters we have people with a light.”

And as the weather worsens, the volunteers are handing out blankets, hats and gloves, as few people are prepared for the cold.

Maliqi says he’s worried about the winter. Not only are the needs growing, but donations are starting to drop off. He adds that the government isn’t providing much help and donor fatigue is setting in.

“Yes, I’m thinking about that,” he says, sounding tired. “Some of [the refugees and migrant are just wearing] T-shirts. We give some clothes, but that’s nothing ... outside from the train they are shaking.”

After the rush, Maliqi and another volunteer, Mare Bojkovska, who served in the Macedonian military in Afghanistan, settle into one of the more tedious parts of their job: waiting for the next train. The two have developed a warm rapport after all the hours they’ve spent together over the past few months.

Maliqi explains that one of the reasons Macedonia’s Albanian community has stepped up to help refugees and migrants is because, for them, being forced out of your home by violence isn’t a foreign concept; it’s a recent memory.

"I was in the 7th grade for the Kosovo war,” he says. “Today they are refugees, but tomorrow maybe we are — we as Albanians, we were refugees. We had conflict in our country. People, they just wanted to leave and to escape.”

But Maliqi says the work he’s doing here comes more from a humanitarian impulse than from religious kinship with Muslim refugees. And his co-volunteer, Bojkovska, isn’t Muslim or religious in anyway. She says she just wanted to help, and that she had never even been inside a mosque before the crisis.

But they both describe what they’re doing here as a calling, almost an obsession.

“You can’t describe the feeling when you help people,” Bojkovska says, calling the work almost addictive. Often she’ll leave after the first evening train to go home, but only gets so far before a text message or a phone call pulls her back.

By 2 a.m., almost all of the big humanitarian groups have gone for the day. The only people left are the volunteers from local mosques. The next train is set to arrive just before 3.

In the back of Maliqi’s car, half buried beneath blankets, water bottles, flashlights and a megaphone are a set of text books from his Ph.D. program. The next semester begins in January, but that’s also when the weather here will be at its worst. As things stand now, Maliqi says he can’t imagine returning to school.