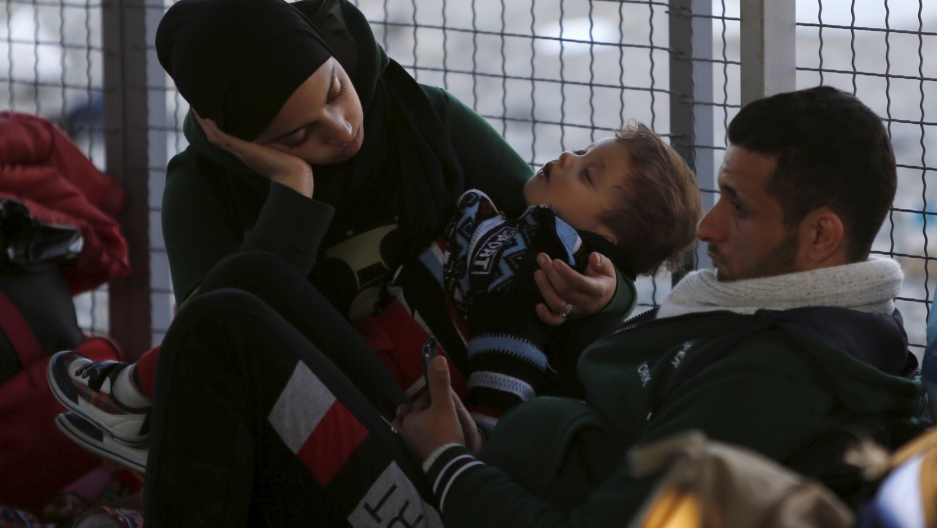 Migrants sleep in a transit camp in Gevgelija, Macedonia, after entering the country by crossing the border with Greece, November 4, 2015.

Two million refugees have fled to Turkey since the start of the Syrian civil war.

And that's just Turkey. Hundreds of thousands more have fled to Greece, Italy, Jordan and Germany.

But these figures don’t offer much insight into how gut-wrenching that decision is — to pack up and leave home.

BBC reporter Kim Ghattas knows about life in war. She was born two years into the civil war in Lebanon. In a piece in Foreign Policy, Ghattas describes how watching and reporting on the Syrian crisis reminds her of her own life in Lebanon.

She remembers the chaos, the violence and the uncertainty.

“I remember the trips to school, not knowing whether we would actually make it,” she says.

The Ghattas family lived on the front line, right on the separation line between East and West Beirut.

“I remember we had to drive through this intersection and it was […] infamous for all the snipers that were located there,” she recalls. “We’d wake up in the morning after a heavy night of shelling, having to make the decision about whether today was the day that we’d go to school or stay at home.”

But as bad as things were, the family got used to it. After a while, it all just seemed “normal.”

“It was really all I had ever known,” Ghattas says.

As the war raged on, her family decided to stay in Lebanon.

“It is a very difficult choice to make, to just leave everything you have ever known, everything that defines who you are behind and start from scratch somewhere else as a refugee,” she explains.

It’s with this background that Ghattas watches and reports on the Syrian war. She feels that having lived in a war zone, she relates more to the plight of Syrians.

“I think that Europeans and Americans who have not had war on their soil for decades and centuries ... are unable to empathize with people who are going through war,” she says.

For example, she's surprised by some of the comments she hears from Americans and Europeans reacting to the Syrian refugee crisis.

“‘Why are these people leaving,’” she says she hears from some people. ‘They have iPhones, they’re well-dressed.’”

The answer, Ghattas continues, is that they are just trying to stay alive.

That's why, Ghattas adds, she decided to write about her own experience living and growing up in a war zone.

It was to let Americans and Europeans know that the war isn't happening to people they don't have anything in common with.

"This is happening to people who are like me," she says. "And I'm a Washington BBC correspondent writing for Foreign Policy magazine. So this isn't some distant war that you can't relate to," she adds.