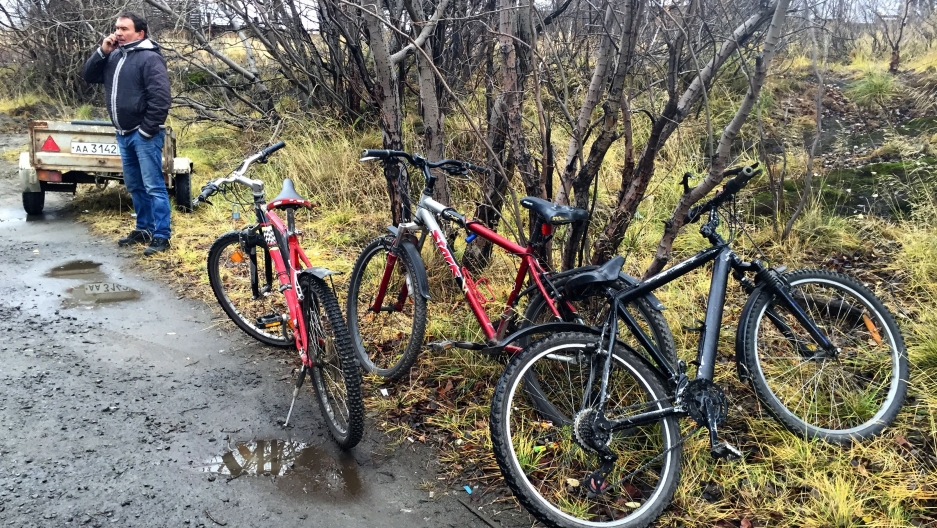 Russia bans foot traffic across the border with Norway. And Norway fines drivers for carrying migrants across. So those making the journey across have to bike.

Editor's note 5/27/20: A previous version of this story displayed images of an asylum seeker. They have been removed for the asylum seeker's protection.

At the airport in the Russian Arctic city of Murmansk, passengers file out from the morning flight from Moscow — many seemingly dazed by the surroundings and clearly underdressed for the coming polar winter.

“We are all from hell,” says a passenger named Tomasi, an Iranian from Tehran, when asked where he and others had arrived from.

Some are fleeing the violence of Syria, Afghanistan and Iraq. Others — joblessness and oppression elsewhere. Yet all are part a growing wave of refugees from the Middle East who have obtained Russian visas as a transit path to Norway.

As word of the Arctic Route to Europe has spread on social media, Norwegian officials are increasingly expressing alarm over the influx of migrants who see Russia's remote border with Norway as a safer and cheaper alternative to leaky boats on the Mediterranean.

But the Russian journey, too, has its unique quirks along the way.

From Murmansk, migrants must first make their way some 136 miles north — past barren tundra, Russian military bases and heavily armed checkpoints — to the small mining town of Nickel.

There, refugees face a new twist: Russian law bans foot traffic at the border and Norway fines drivers for carrying migrants across — meaning the only way to cross is by bicycle.

The legal twist has prompted a brisk trade in used bicycles throughout Russia's Northwest — any size or condition accepted. Entrepreneurial Russian smugglers have even arranged package deals of minivans and bicycles.

“We can't just give the bicycles away for free, right?” says Kirill, a Russian who arranges transport from Murmansk to the border. “We help them so they don't get lost. So someone doesn't take advantage of them."

As the trickle of refugees has grown, a lone hotel in the Russian town of Nickel has become a key stopover point before heading for the border.

On a recent evening, migrant Syrians, Afghans, Egyptians, Palestinians, Iraqis and others pack into 30 rooms for the night. Others were left to seek refuge in a nearby student dormitory. Outside, vans loaded with bicycles waited to drop migrants at the border crossing.

“People here work together — the bus, the hotel, the taxi — they all work together,” says Nabil, a Tunisian national who moved to St. Petersburg last year after terrorist attacks destroyed the Tunisian tourism industry.

Nabil says he paid $200 for his bicycle. “$200! It's just a little bicycle!” he says, indicating it was little more than a frame with pedals.

Nabil’s plan is to shove off in the morning. “I’ll take my passport and tell the Norwegians the truth: I want to try new life here ... if you don’t mind.”

So far, Norwegian authorities have been relatively welcoming. An estimated 2,000 migrants have entered the country and received temporary refugee status.

But the growing wave is testing the limits of Norwegian hospitality.

In Kirkenes, a small Norwegian town just across the border that prides itself on close relations with its Russian neighbors, mayor Rune Rafaelson, says local police estimate 10,800 migrants may arrive by year's end — in effect doubling the entire region's population.

Rafaelson is one of a growing number of Norwegian politicians who suspects the Kremlin is driving the current influx.

“It's sort of payback time,” says Rafaelson, referring to Norway’s participation in sanctions on Russia over its Ukraine policy.

Rafaelson notes that neighboring Finland – a non-NATO member that has warmer relations with Russia — has a much longer border than Norway but faces no similar migrant surge.

“[What] we need is to have an understanding from [President] Putin and the government of Russia saying this cannot continue. We will have the right to use international law and send them back,” says Rafaelson. Then he adds, “but of course families from Aleppo will receive protection.”

That's good news for Samir, a 28-year-old Syrian who fled Aleppo in 2013 for Russia — the only place where he could get a visa.

Speaking in Russian, Samir says he didn't want to be involved in the fighting at home. “I didn't want to kill,” he says. But after he was denied asylum and work papers in Russia, he says he jumped at the chance to get to Norway.

The journey here hasn’t been easy though. A Russian taxi driver took his money and then dropped him with his bike 37 miles from the border — giving him no choice but to pedal through the cold.

Still, Samir made it. And compared to the alternative of possibly drowning at sea, it was well worth the price of admission.

“My sister's husband went from Turkey by boat across the sea and it cost him $1200.  This was much cheaper, he adds.

Outside a bunker-turned-refugee-shelter in Kirkenes, Nabil, the Tunisian, emerges proudly holding his six-month temporary visa for Norway. “Winner!” he exclaims.

After a few days' delay, he says he finally got his taxi to the border and biked the last half mile into Norway. Officials there promptly confiscated his wheels for failing to meet local safety standards — as they have by the hundreds. No brakes? Some rust? Sorry but, in Norway, that means no bike.

“Finally Norway. It's a very good country, very quiet,” he says. “Look at the houses ... simple and beautiful.”

And if he can stay here past the winter, Nabil says he might even buy a Norwegian bike to cruise the city and take in the view.