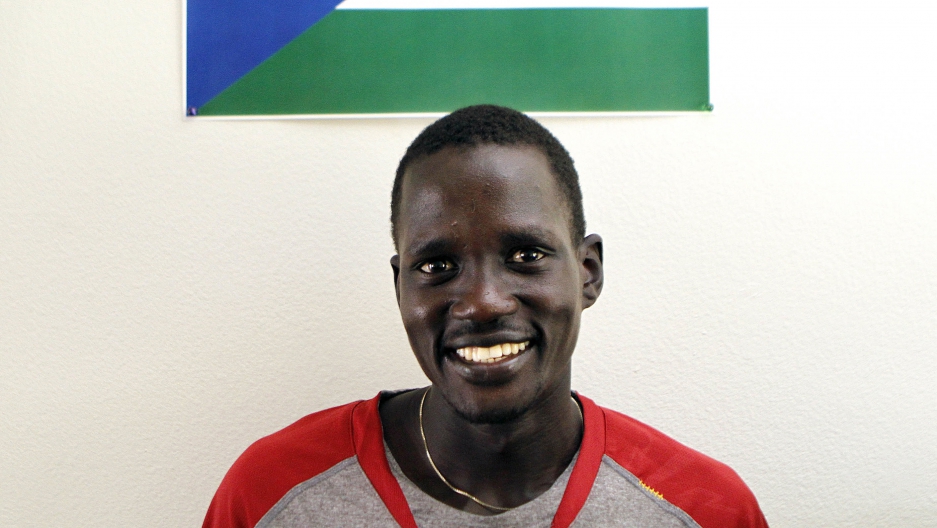 Guor Marial, 28, smiles in his apartment under a South Sudan flag in Flagstaff, Arizona, July 21, 2012. The marathon runner, born in what is now South Sudan, ran under the Olympic flag in London.

That's what Guor Maker did back in 2012. He's a marathon runner from South Sudan. At the time, the IOC didn’t recognize the newly formed country. And he refused to run for Sudan.

So he ran as an Independent Olympic Athlete. That gives him a fantastic perspective into the IOC’s decision. Not surprisingly, he loves it. And he loves what it does for athletes across the globe.

“These youth, wherever they might be, if they have the ability to qualify, they will have no fear about not being able to attend the games,” he says. “Now, it gives them hope and inspires them. And that’s how I hope they are feeling. That’s how I was feeling in 2012.”

Maker had to fight to compete in 2012. But he doesn’t think his appeal has much to do with the current IOC decision. “The time is different,” he says. “It was a different time and 2016 is different. There are more people, more refugees.”

But no matter how hard the IOC works to include refugee athletes, Maker fears some will not be able to make it. “The qualifications are very difficult. You need to be in a place where you can train hard. For many young athletes, that’s just not possible.  All these young talents are supposed to be in school and in sports, but they’re currently in chaos. “

The number of refugee athletes might be small, but Maker plans to cheer for them. He now competes under the flag of South Sudan. And even if a refugee were to best his countrymen in Rio, he would be happy.

“My heart is always with the refugees worldwide.”