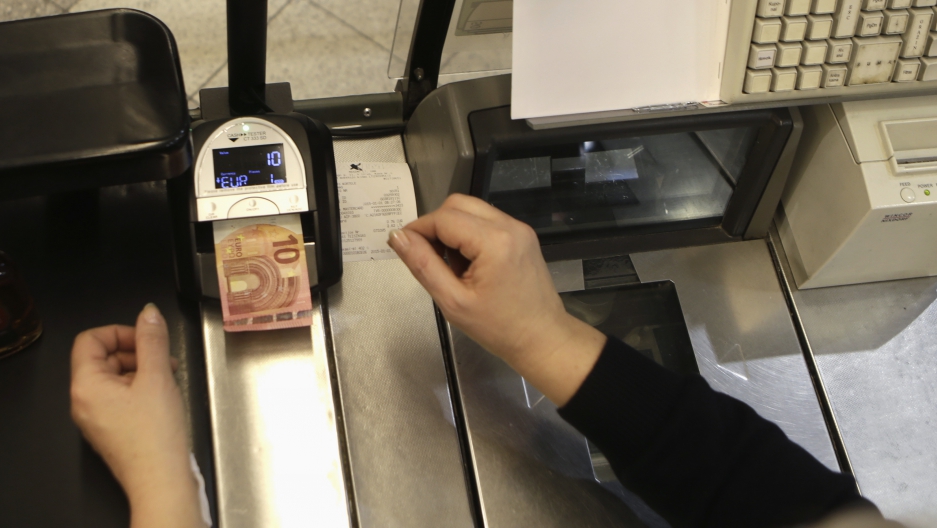 A cashier inspects a euro banknote at a shop in Vilnius January 1, 2015.

Bills. Dough. Loot. Moola. Whatever you call it, could you survive without cold, hard cash?

Sweden was the first European country to print and use paper money, but it may soon do away with physical currencies.

In Sweden, four out of five purchases are made electronically, 95 percent of all sales at retail stores are handled with credit cards, and between 2010 and 2012, about 500 bank branches went cash-free and 900 ATM machines were taken off the streets.

Banks can save a lot of money and sidestep regulatory headaches by moving to a cash-free system, and they can also avoid bank robberies, theft, and dirty money.

Sweden has negative interest rates, which causes commercial banks to charge interest on account balances. Retail banks haven’t started charging customers a fee for keeping cash on hand — not yet at least — but the negative interests rates are making the idea of a cashless economy more enticing.

Claer Barrett, the editor of Financial Times Money, says the Western world is headed toward a world without physical currency.

“Andy Holder — he’s the chap that’s the chief economist at The Bank of England — did a speech and suggested the idea of having negative interest rates in the UK,” says Barrett. “He said if we did introduce this, the problem would be that everyone in Britain would go to the cash point — and we don’t have to pay ATM fees in this country  — withdrawal all of their cash and keep it under the mattresses to be avoid being charged the negative interest rates.”

To avoid money hoarding, Holder suggested that the UK move towards to a government-backed digital currency.

“That got me thinking about how I use cash and contactless payments,” says Barrett. “Up to the value of £30, about $40 or so, we can just pay by tapping a card — we don’t even have to enter our pin number. It’s becoming really, really easy to pay for things that we would’ve paid for in cash, or even things we might have paid for traditionally on a debit card, by just swiping.”

Tech companies are hoping to get a piece of the cashless economy. Apple has introduced Apple Pay, a one-touch mobile payment system enabled for the iPhone, the Apple Watch, or the iPad; and Google has rolled out Google Wallet, which allows users to instantly send, receive and spend money. Bitcoin, a fully digital currency, is already used across the globe.

But does a cashless society really make good economic sense?

“The fact that cash is being drawn out of society, is less a feature of our everyday lives, and ... the ease of electronic payments — is this actually making us spend more money without realizing it?” asks Barrett.

Barrett wanted to find out if the absence of physical currency does indeed cause a person to spend more, so she decided to conduct an experiment a few months ago.

“I decided that I was going to try to just use cash for two weeks to spend on all of my essential purchases and see what that would do to my spending,” she says. “I did spend a lot less money because it is incredibly hard to predict how much cash you’re going to need — I was forever drawing money out of cash points. Months later, I’m still finding bills crumbled in the back of trouser pockets and the pockets of handbags.”

During the experiment, Barrett took a train ride. En route, there was an announcement that the restaurant car was not currently accepting credit or debit cards. The train cars filled with groans because many of the passengers were traveling without cash.

“It  underlines just how much things have changed in this last generation,” she says. “My parents, when they were younger, they used to budget by putting money into envelopes — they’d get paid and they’d immediately separate the cash into an envelope so they knew what they had to spend week by week. It was a very effective way for them to keep track of their spending. Nowadays, we’re all on credit cards, we’re doing in-app purchases, and money is kind of becoming this less physical and more imaginary fantasy type of thing that we can’t get our heads around.”